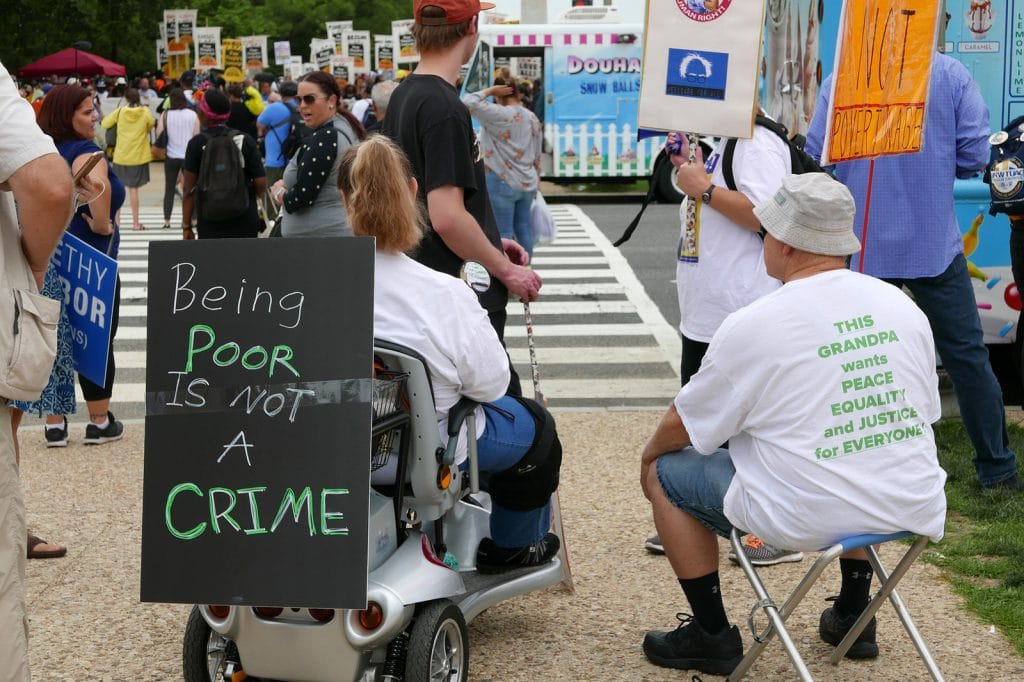 Thousands of people from all over America gathered on the Mall for a Rally and March to The Capitol as part of the The Poor People’s Campaign Moral Revival in Washington DC, June 23, 2018. Photo credit: Susan Melkisethian.

On June 1, 2018, Arkansas became the first state to implement Medicaid work requirements, imposing a set number of working hours on adult beneficiaries as a condition of receiving Medicaid. These requirements are part of a new Trump Administration policy whereby states can apply for waivers to add work requirements to their Medicaid programs. Kentucky and Indiana will soon follow Arkansas in implementing these changes, as well as many other states with pending waiver applications.

Work requirements are by no means a Trumpian concept. In 1996, Bill Clinton signed the Personal Responsibility and Work Opportunity Reconciliation Act (PRWORA) into law, which eliminated previously guaranteed aid for poor families through Aid to Families with Dependent Children (AFDC) and replaced it with the new Temporary Assistance for Needy Families (TANF) program. This provided block grants to states, introduced time limits on cash assistance, and imposed work requirements on recipients.

TANF was quickly hailed as a success due to a dramatic decrease in welfare caseloads. 4.5 million families received AFDC in 1996, while only 1.7 million received TANF in 2009, effectively cutting the welfare rolls by 62 percent.

However, this perceived success was based on the assumption that no longer receiving welfare is synonymous with not needing welfare, which is, by no means, the case. Forcing the poor off of welfare has left them much worse off, with many struggling in low-wage and unstable employment.A Maryland based study found that over a five year period, more than half of former TANF recipients had continuously low, unstable, or falling earnings and only 8 percent of former recipients earned more than the federal poverty threshold for a family of three in each of the five years. The majority of people subject to work requirements under TANF have remained below the poverty line, and some have even become poorer.

Like TANF’s work mandate, Medicaid work requirements are being implemented based on a Randian false narrative that the poor are lazy and entitled. When PRWORA was passed in 1996, Hillary Clinton claimed that people who had moved from welfare to work were “no longer deadbeats—they’re actually out there being productive.”

America does not have a deadbeat problem, but rather an attitude problem. The poor are an easy scapegoat, given their paltry political capital in the face of the goliaths of lobbying. A recent report from the Pew Research Center found that a quarter of the country believes the most important reason inequality exists is that some people work harder than others.

The reality is, in fact, largely different. Six in ten Medicaid adults are already working, and most of those who are not working report illness or disability, caregiving responsibilities, or going to school as reasons for not working. This leaves only seven percent of the nonelderly Medicaid population who will be eligible for the work requirement policies, which includes those who are not working because they are looking for work or unable to find a job. 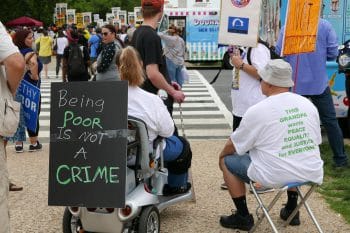 Thousands of people from all over America gathered on the Mall for a Rally and March to The Capitol as part of the The Poor People’s Campaign Moral Revival in Washington DC, June 23, 2018. Photo credit: Susan Melkisethian.

Work requirements are not a solution to raising people out of poverty, but rather a signal to the poor that they are not worthy of support. Medicaid work requirements will force recipients into a catch-22. If they don’t comply with the new work mandates, they’ll lose coverage, but if they do meet them, they may still lose coverage, as their income will likely exceed their states’ very low Medicaid eligibility thresholds.

The savings that states have projected from Medicaid work requirements come from reducing Medicaid coverage rather than by lifting people out of poverty. To make matters worse, the projections do not take into account the increased costs that can stem from technology, red tape and staffing needs. Rather than cutting costs, Kentucky’s work mandate is costing the state nearly $187 million for 2018 and an additional $187 million in 2019 to implement its approved waiver. Minnesota’s application estimates that its counties would spend $121 million in 2020 and $163 million in 2021 to administer the work mandate.

On the other hand, receiving Medicaid coverage can help lift people out of poverty. According to a 2015 study from economists Sarah Miller and Laura R. Wherry, American adults whose families had access to prenatal coverage under Medicaid have lower rates of obesity, higher rates of high-school graduation, and higher incomes as adults than those from similar households in states without Medicaid. What’s more, children covered by Medicaid expansions go on to earn higher wages and require less welfare assistance as adults.

Despite consistent evidence to show that work requirements do not cut costs, and do nothing for the poor, save leave them with a lingering taste of contempt, U.S. safety net policies continue to be paternalistic and judgmental. On introducing the Medicaid work requirements, Trump-appointed Centers for Medicare & Medicaid Service Administrator, Seema Verma, echoed Hillary Clinton’s sentiments 22 years ago, declaring that “[states] want to develop programs that will help them break the chains of poverty and live up to their fullest potential.”

Verma is, no doubt, dizzy on alternative facts. Work requirements will not break the chain of poverty. To help the poor live up to their fullest potential, the real change must, in fact, be in shifting the pernicious perception of the lazy American poor.

Zehra Abedi is a healthcare researcher based in New York. She is a graduate of the Yale School of Public Health.