As FAIR has noted before (1/8/18, 3/20/18), to MSNBC, the carnage and destruction the U.S. and its Gulf Monarchy allies are leveling against the poorest country in the Arab world is simply a non-issue.

On July 2, a year had passed since the cable network’s last segment mentioning U.S. participation in the war on Yemen, which has killed in excess of 15,000 people and resulted in over a million cases of cholera. The U.S. is backing a Saudi-led bombing campaign with intelligence, refueling, political cover, military hardware and, as of March, ground troops. None of this matters at all to what Adweek (4/3/18) calls “the network of the Resistance,” which has since its last mention of the U.S.’s role in the destruction of Yemen found time to run over a dozen segments highlighting war crimes committed by the Syrian and Russian governments in Syria. 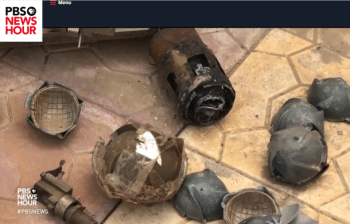 By way of contrast, as MSNBC was marking a year without mentioning the U.S. role in Yemen, the PBS NewsHour was running a three-part series on the war, with the second part (7/3/18) headlined, “American-Made Bombs in Yemen Are Killing Civilians, Destroying Infrastructure and Fueling Anger at the U.S.” The NewsHour’s Jane Ferguson reported:

The aerial bombing campaign has not managed to dislodge the rebels, but has hit weddings, hospitals and homes. The U.S. military supports the Saudi coalition with logistics and intelligence. The United States it also sells the Saudis and coalition partners many of the bombs they drop on Yemen.

MSNBC chat show/Starbucks commercial Morning Joe did run one segment (4/25/18) that vaguely mentioned the war on Yemen, but failed to note the U.S.’s role in it at all, much less that Washington is arming and backing the conflict’s primary aggressor. Instead, they did the perverse inversion––previously mastered by Washington Post’s Jackson Diehl (FAIR.org, 6/27/17)—of not only ignoring the U.S.’s major role in killing thousands, but painting the U.S. as a noble haven for refugees. The schlocky segment, an interview with writer Mohammed Al Samawi, was a shallow mixture of “interfaith” pablum, poverty porn and self-congratulations to the U.S. for taking in refugees (without, of course, acknowledging that they’re seeking refuge from a crisis the U.S. has created). 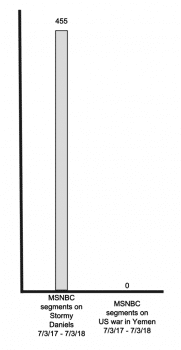 For a bit more context, in the time period of July 3, 2017, to July 3, 2018, MSNBC dedicated zero segments to the U.S.’s war in Yemen, but 455 segments to Stormy Daniels. This isn’t to suggest the Stormy Daniels matter isn’t newsworthy—presidential corruption is per se important. But one has to wonder if this particular thread of venality is 455 stories more important than Trump aggressively supporting a war that’s killing hundreds of people a month, injuring thousands, and subjecting millions to famine and cholera. Did MSNBC editors, poring over the latest academic foreign policy literature, really come to the conclusion Trump’s war in Yemen isn’t important? Or is MSNBC simply fueled by partisan Russia dot-connecting and stories that allow them to say “porn star” as much as possible?

What seems most likely is MSNBC has found that attacking Russia from the right on matters of foreign policy is the most elegant way to preserve its “progressive” image while still serving traditional centers of power—namely, the Democratic Party establishment, corporate sponsors, and their own revolving door of ex-spook and military contractor-funded talking heads (3/26/18). After all, Obama backed the war on Yemen—though not nearly as aggressively as Trump has—and it’s difficult to make a coherent left-wing, anti-war criticism when the current Republican in office is simply carrying out your guy’s policy, but on steroids.

In any event, it’s not like any Yemenis are going to pull ads, turn down appearances, or phone Comcast higher-ups complaining. So, who cares? To be poor and brown—to say nothing of not serving the immediate partisan interests of the Democratic party—is evidently to not matter much in the eyes of MSNBC producers and on-air talent.

Please tell MSNBC to pay serious attention to the U.S. role in the ongoing humanitarian disaster in Yemen.

Adam Johnson is a contributing analyst for FAIR.org.