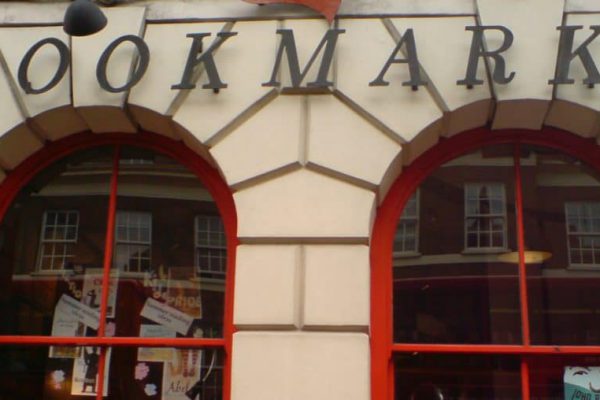 The gang trashed the left-wing shop in Bloomsbury Street, which stocks socialist publications and is also the bookseller for the TUC.

painfully stupid crew of Alt-Right morons Make Britain Great Again under the leadership of gimpy ginger midget Luke Nash-Jones decided to, in their own words, "ambush" Bookmarks socialist bookshop after their demo in support of fat lunatic Alex Jones outside the BBC. Pathetic scenes follow, with the cameraman picking up random books and getting bamboozled trying to think of reasons why they're bad, before the whole lot of them get ushered gently out by the shopkeepers like the care-in-the-community cases they are. Absolute freaks! 😄original uploaders title was "MAKE BRITAIN GREAT AGAIN INVADES COMMUNIST BOOKSTORE" Edit to add: look out for Margate's own David Coppin, confirmed fascist who kicks about with the South East Alliance and the Infidels. Yet this lot are going on about 'anti-semitism'! update: they've deleted the video off their channelhttps://www.youtube.com/channel/UCET3knMA7JmGRPuUb97A__g

About a dozen fascists stormed into the bookshop close to the shop’s closing time, attempting to intimidate staff and customers as they destroyed books and materials.

About 6:45 this evening Bookmarks Bookshop was attacked by about a dozen masked wearing fascists. They threatened staff and attempted to destroy books and other materials. Fortunately no staff were hurt. This is the true face of fascism. No Paseran!

Staff member Noel Halifax had just left but saw the gang approaching the shop premises. He rang the remaining member of staff, Senan Mortell, warning him to shut the shop, but it was too late — the thugs were already piling in.

Mr Mortell told the Star today: “There were 12 or 13 of them. One of them was wearing a Donald Trump mask.

“They were chanting stuff about Muslims. Then they smashed our book displays. We have magazines from Unite Against Fascism. They ripped up the magazines and threw them around the shop. They made threats to return and ‘show what they can do.’

“Seven or eight of them were well-dressed, the other four of them were more like boot-boys. I recognised one of them. He’d been in a couple of weeks earlier and had shouted racist stuff.”

The gang made off after wrecking the bookshop.

Mr Mortell added: “They’re confident enough to do this at 6.30 in a bookshop in central London.”

The Metropolitan Police has been slow off the mark, downplaying the seriousness of the incident in a statement today. The force said: “Police were called at approximately 18:35hrs on Saturday August 4 to reports of a protest inside a shop on Bloomsbury Street, WC1.

“No other offences were disclosed at the time.

“Police received a second call a short time later stating that the group had left the premises after causing some damage inside the shop. There were no injuries.

“An appointment has been made for officers to speak with the complainant. No arrests have been made.”

Campaign group Stand Up To Racism (SUTR) are taking the incident more seriously. Spokesman Michael Bradley said: “Luckily, no-one was hurt this time, but this is a sinister development that indicates the growing confidence of the far right, who feel they can attack a bookshop in central London in broad daylight.

“Attacking a bookshop also exposes their claims to be defenders of free speech as hollow.”

Today Kensington Labour CLP tweeted: “Buy your books from Bookmarks, who were attacked by masked people shouting fascist slogans last night. You don’t have to be a Red Flag-flying communist to understand that this is deeply alarming. This is where the Tory ‘hostile environment’ leads. Challenge it.”

And Ealing Central & Acton MP Rupa Huq was quick to respond to the “utterly despicable” incident on Twitter, saying: “Free speech and independent bookshops — under threat in an age where intolerance and Amazon flourish — should be cherished. Utterly despicable.”