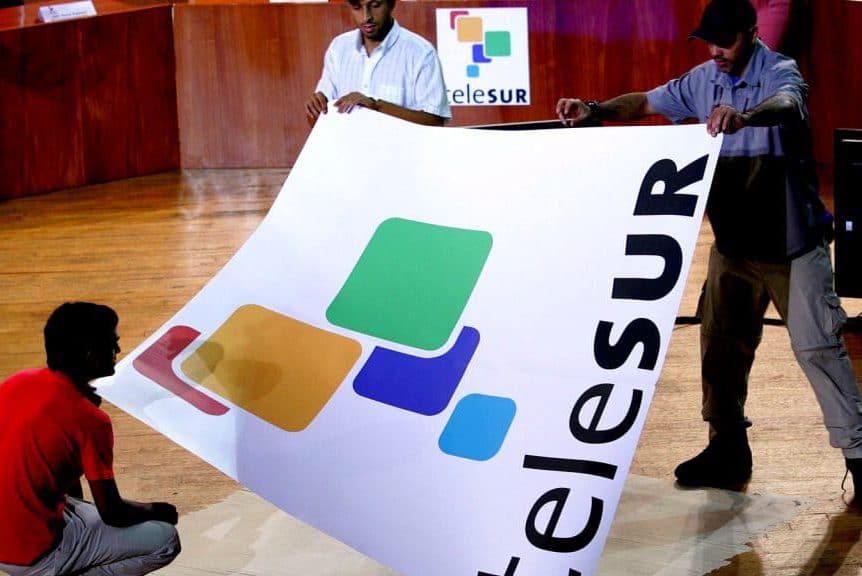 Workers set up for the inauguration of Telesur in Caracas, Venezuela on July 24, 2005. Photo credit: AP/Leslie Mazoch.

In a short article posted on teleSUR’s website on Monday, the regional news network—which is based in Venezuela but also has received funding from Argentina, Bolivia, Cuba, Ecuador, and Nicaragua—explained:

teleSUR English’s page has been removed from Facebook for the second time this year without any specific reason being provided. It should be noted that the first time this occurred back in January 2018, Facebook did NOT provide any explanation in spite of our best efforts to understand their rationale. This is an alarming development in light of the recent shutting down of pages that don’t fit a mainstream narrative.

According to the outlet, “the only communication” teleSUR has received from Facebook was the following message:

Your Page “teleSUR English” has been removed for violating our Terms of Use. A Facebook Page is a distinct presence used solely for business or promotional purposes. Among other things, Pages that are hateful, threatening or obscene are not allowed. We also take down Pages that attack an individual or group, or that are set up by an unauthorized individual. If your Page was removed for any of the above reasons, it will not be reinstated. Continued misuse of Facebook’s features could result in the permanent loss of your account.

The network has turned to Twitter to raise awareness about Facebook’s move, tweeting with the hashtag #BringBackteleSUREnglish:

#Breaking | Facebook has delete our Facebook page for the second time this year without any explanation. Please spread the word and help us get our page back. #BringBackteleSUREnglishhttps://t.co/6AFFZDWUiy

Max Blumenthal, editor of The Grayzone Project, called Facebook’s decision “deeply disturbing.” He also noted that the platform recently banned Venezuelanalysis.com, which like teleSUR offers a leftist perspective on Latin America, and raised alarm about Facebook’s work with the Digital Forensic Research Lab, a project of the Atlantic Council, a NATO-backed, D.C.-based think tank:

Facebook has just deleted the page of @telesurenglish. A network source tells me FB justified eliminating the page on the vague basis of "violation of terms." The NATO-backed @DFRLab is currently assisting FB's purge. This is deeply disturbing. pic.twitter.com/MQe3Brdn15

After Facebook banned Venezuelanalysis.com, Blumenthal shared his concerns on Aaron Maté’s podcast for The Real News:

Facebook's shuttering of @telesurenglish 's page comes days after it did the same to @venanalysis page w/o explanation. The latest outgrowth of FB's Orwellian partnership w/ the Atlantic Council. ICMYI, @MaxBlumenthal discussed it w/ me on @TheRealNews : https://t.co/3XayXXpg34 https://t.co/ZgTaJv0rdU

Outragous!
We at @venanalysis offer all our solidarity & cries of rebellion against this repressive action from FB

Only days ago, we ourselves were randomly removed from FB, only to be reinstated after popular pressure on social media
Enough is enough!#BringBackteleSUREnglish https://t.co/tkJqsoOsk5

Comedian and activist Lee Camp, who hosts a comedy news show on RT America—a Russian government-funded, D.C.-based television news network that has been harshly ridiculed (pdf) by the U.S. intelligence community—praised teleSUR as “one of the best online resources for debunking Western propaganda about Venezuela.”

As the US-led economic war on Venezuela continues, Facebook removes a Venezuelan-headquartered news network’s Facebook page, Telesur English, one of the best online resources for debunking Western propaganda about Venezuala.https://t.co/pH1HqiajBa

Sameera Khan, a correspondent for RT America, praised teleSUR’s coverage of the Pakistani elections, and also raised alarm about Facebook’s partnership with the Atlantic Council:

I am sorry for flooding your news feeds with #BringBackTelesurEnglish tweets but I simply cannot ignore Facebook’s censorship of left-wing media.

This is what happens when social media platforms partner with NATO-funded think tanks to police free speech. https://t.co/Mz8Xrtk1La

Glenn Greenwald connected the incident to the broader issue of urging social media companies to censor users, pointing to The Intercept‘s reporting on other instances of platforms silencing leftist voices:

It seems like the censorship power many people on the left want Silicon Valley executives to unilaterally exercise might end up being wielded against the left. One good way to know that would happen is that is already is happening https://t.co/3KXEHvi2n5 – https://t.co/OyElNWwoue https://t.co/G1ZprSQgGZ

Facebook’s decision to suspend teleSUR comes after Facebook, Apple, Google-owned YouTube, and Spotify banned right-wing radio show host and conspiracy theorist Alex Jones. While the bans on Jones were welcomed by many, free speech advocates such as the digital rights group Electronic Frontier Foundation (EFF) urged caution, pointing to the other voices that have been—or could be in the future—silenced by increasingly powerful social media and online platforms.

“We should be extremely careful before rushing to embrace an Internet that is moderated by a few private companies by default, one where the platforms that control so much public discourse routinely remove posts and deactivate accounts because of objections to the content,” EFF senior staff attorney David Greene wrote for The Washington Post Monday.

“The power that these platforms have over the online public sphere should worry all of us, no matter whether we agree or disagree with a given content decision,” Greene added. “We must demand that they apply their rules consistently and provide clear, accessible avenues for meaningful appeal.”