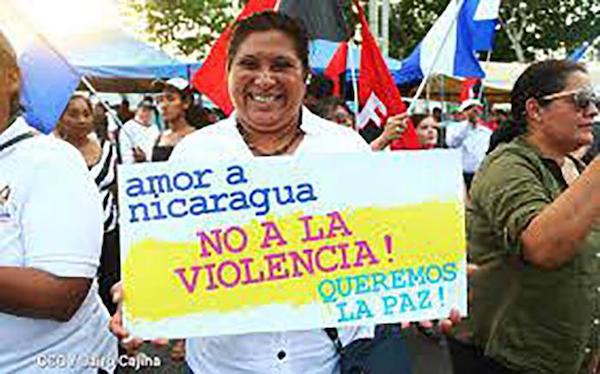 Since last April 18, the right wing has subjected the Nicaraguan people to a wave of violence in an attempt to overthrow President Daniel Ortega.

The most recent of these acts occurred August 15 during a demonstration called by the Nicaraguan opposition, when an armed group attacked the national water and sewer company (Enacal), teleSUR reported.

According to a local police communiqué, the suspected terrorists opened gunfire and launched home-made grenades onto Encal wells which supply the population of Managua.

Such attacks are part of an ongoing coup attempt against President Ortega, that has cost the lives of 198 persons, numerous human rights violations, and severe damage to the national economy, National Assembly sources stated.

During the last three months of violence, 252 public and private buildings have been destroyed, as well as 209 kilometers of streets and highways. Some 278 pieces of industrial and construction equipment have been burned, along with 389 vehicles, reported José Santos Figueroa, vice president of the National Assembly standing committee for Production, Economy, and Budget.

“This coup plan is characterized by efforts to interrupt and severely damage peace, security, tranquility, and the right to life of Nicaraguans,” stated Santos, a Sandinista National Liberation Front deputy.

Added to this are export losses valued at 270 million dollars, he pointed out, noting that the economy suffered a 7% deceleration in the rate of deposits and 10.7% in credit awarded to the productive sector. Through July 31, an estimated 68,000 jobs held by Nicaraguans affiliated with the Social Security system were affected.

As a result of the damage, on August 14 the National Assembly approved changes to the national budget for the year, with projected income and expenditures reduced.

TIMELINE OF A COUP ATTEMPT

Some 76 deaths occur during conflicts. The Government denounces the plot as financed from abroad.

Daniel Ortega expresses his willingness to hold talks to resolve the crisis and announces that the social security reform will be revoked. Looting occurs.

The dialogue is suspended due to lack of consensus on the agenda: the opposition demands the resignation of Ortega and early elections; while the legitimate Ortega government rejects these demands and denounces the attempted “soft coup.”

Before a demonstration of supporters, Daniel Ortega refuses to hold the 2021 elections early, saying that elections will be conducted as mandated by law.

The national dialogue is established, mediated by five bishops from the Episcopal Conference of Nicaragua (CEN).

The Ortega government opens the door to visits by the United Nations High Commissioner for Human Rights, in order to demonstrate the intentions of those who promote instability from abroad.

The Government of Nicaragua declares unacceptable the presence in the country of a commission from the Organization of American States (OAS) considering it interventionist.