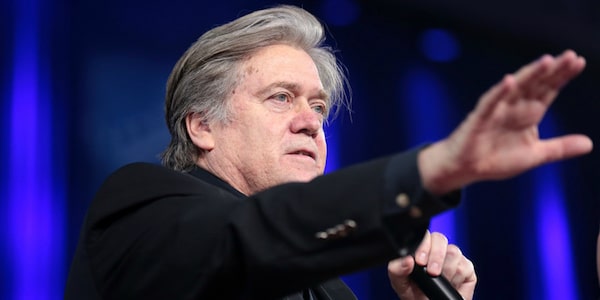 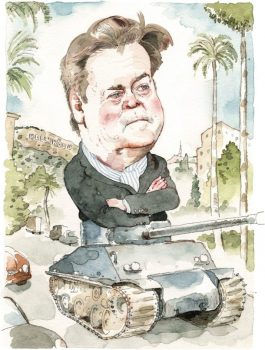 The New Yorker on September 3 announced it had invited white nationalist grifter Steve Bannon, the former Trump strategist and former head of the racist conspiracy theory website Breitbart, to a top spot at the annual New Yorker Festival, the magazine’s high-profile celebration of art, media and politics. It’s not surprising that sharing a platform with the likes of Bannon impelled many of the other speakers to threaten to cancel their slots at the festival in protest, along with hordes of attendees asking for their money back. By mid-afternoon, the New Yorker had pulled the plug on Bannon’s appearance.

Bannon was to be interviewed by editor David Remnick, who said he was hoping to put “pressure on a set of arguments and prejudices that have influenced our politics.” Remnick maintained he was “hardly pulling Bannon out of obscurity,” owing to his former positions at Breitbart and in the Trump White House.

But the key word here is “former.” Bannon resigned in disgrace from the White House last August after feuds with a number of staffers including Ivanka Trump and H.R. McMaster, and stepped down from Breitbart in January after negative comments about Trump’s connections to Russia, and recently moved to Europe to support right-wing nationalist movements. By all accounts, he has little power or influence in European politics currently, and is hardly a factor in the current far-right discourse in the US. Why bring him back from the dead? Anyone who follows politics or reads the New Yorker knows who Bannon is and what he believes. The world doesn’t need yet another interview with him to try and understand his views.

Even if such interviews are delivered with stern questioning, “defeating” Bannon with some sort of grand argument or series of “gotcha” questions will hardly expose Bannon’s views as faulty, or entice his supporters to switch ideological teams. Just take a look at some of Errol Morris’s recent interview documentary with Bannon to see the futility of expecting Bannon to answer “tough” questions honestly. In it, he denies that he is in fact a “white nationalist” or that Breitbart cultivates white supremacist and neo-Nazi arguments, and also maintains that Donald Trump is not a member of the wealthy elite, and rather is “just a guy from Queens.” What purpose do these kinds of interviews serve, other than to keep Bannon in the news as some maniacal villain?

Remnick and others at the New Yorker who booked Bannon to speak at the festival should obviously have anticipated that inviting Bannon would incite backlash from other speakers and attendees alike. Now, thanks to the exposure from his dismissal from the festival, Bannon and his followers on the right can continue to claim that they are being censored for having “conservative” views.

Huh. Call me old-fashioned. But I would have thought that the point of a festival of ideas was to expose the audience to ideas. If you only invite your friends over, it’s called a dinner party. Joe McCarthy was done in when he was confronted by someone with intelligence and guts, before a live audience. Sometimes a platform is actually a gallows.

Of course, whether white nationalism is good or not is a debate that has been settled, and not as a result of respectful discourse. As for McCarthy, Gladwell’s remembrance of his downfall is a selective misreading of history that was quickly called out by a number of replies from Twitter users. McCarthy actually provides an interesting parallel for Bannon in how each were given a spotlight to foment hatred. 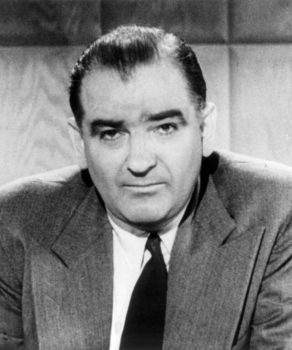 First, McCarthy’s position as the head of the Senate Subcommittee on Investigations was carelessly given to him by more moderate politicians who thought it would keep him out of trouble. “We’ve got McCarthy where he can’t do any harm,” Republican Majority Leader Robert Taft boasted at the time. And “straight reporting” wire services like Reuters and UPI, which provided reporting for most of the country’s local newspapers, covered McCarthy’s constant accusations against so called “Communist sympathizers” uncritically, even credulously, further amplifying McCarthy’s megaphone.

And like the now-unpopular Bannon, McCarthy was already on his way out by June 9, 1954, when Welch made his famous “Have you no sense of decency, sir?” statement that Gladwell is implicitly invoking as the moment that McCarthy was defeated. In reality, voters in McCarthy’s home state of Wisconsin had already tallied almost a half a million petition signatures to recall McCarthy. And what finally did McCarthy in was not the public grilling by Welch, but the public shunning after his December 1954 censure by the Senate (partly influenced by the suicide of Wyoming Sen. Lester Hunt, a McCarthy target).

Like McCarthy, Bannon and his ilk will not be defeated through respectful discourse, but through political action. Yet the media still finds the need to give him and his ideas press. Why do ostensibly “liberal” outlets and publications insist on “debating” people who have nothing but contempt for their ideas? How do they fail to grasp that responding to arguments based on irrational hatred with a West Wing-style tongue-lashing accomplishes absolutely nothing–other than mainstreaming their opponents’ ideas?

What does work is deplatforming. Look at Milo Yiannopoulos, the former Breitbart editor and far-right leader who was kicked off of Twitter and Facebook following a campaign of racist harassment against African-American actress Leslie Jones, and whose speaking engagements at colleges and universities around the country were consistently protested. He now has become practically invisible as both a “thought leader” of the alt-right and as a media fixture.

The alt-right and neo-Nazi movements in general have been effectively deplatformed in public spaces by groups such as antifa, who show up in droves to counter-protest their rallies and speaking engagements. The initial Unite the Right rally in Charlottesville saw hundreds of racists show up to march (and murder a counter-protester), while the second Unite the Right rally in Washington, DC, had only about 30 attendees, met by thousands of counter-protesters. Even neo-Nazi leader Richard Spencer has noted that such deplatforming tactics have hindered the ability of the alt-right to get their messages across.

FAIR (8/22/18) has ruminated on the uselessness of liberal outlets’ “scrutiny” of people like Bannon, who has been interviewed nearly weekly by one major outlet or another over the past six months. If being “confronted” was going to do him in, wouldn’t Bannon be done in by now? While he (or any other far-right figure) will likely always find some venue to disseminate their views, that platform doesn’t need to come from “liberal” outlets that Bannon’s followers have nothing but contempt for.

Unfortunately, it looks like Bannon will continue to be offered space in establishment media: He is a featured speaker at the Economist’s ironically named Open Future festival in New York next week. The Economist recently reaffirmed Bannon’s speaking slot, stating that “the future of open societies will not be secured by like-minded people speaking to each other in an echo chamber, but by subjecting ideas and individuals from all sides to rigorous questioning and debate.” Because getting the Nazis’ valuable input on the Jews of Europe, or Confederate planters’ thoughts on whether slavery should continue, surely contributed to the actualization of open societies.