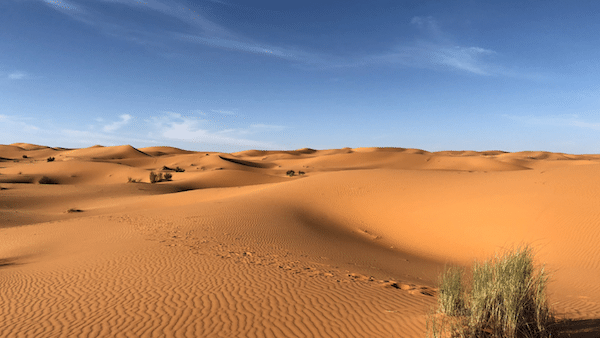 Spanish Foreign Minister Josep Borrell recently revealed that Donald Trump suggested that the government of Spain build a wall across the Sahara desert to prevent immigrants from traveling into the country.

During one meeting, a Spanish diplomat reportedly pointed out that the Sahara desert was over 3,000 miles long, to which Trump replied,

The Sahara border can’t be bigger than our border with Mexico.

However, Spain only occupies a small part of the border, so the wall would need to be built through many different countries.

It seems that Borrell may have revealed details that the agency was not comfortable with.

A spokesperson for the foreign ministry told The Guardian that,

We can confirm that’s what the minister said, but we won’t be making any further comment on the minister’s remarks.

In a transcript of a White House meeting that was leaked last year Trump reportedly told staffers and reporters that the proposed border wall in the United States should be transparent so that drug cartels don’t crush people with launched drug packages.

President Trump offers a vivid example of someone on our side of the wall being killed by a falling, 60-lbs. bag of heroin pic.twitter.com/AH4XpV4Y28

Regardless of theoretical concerns, government borders are a utopian idea to begin with, especially when considering areas as large as Europe and the United States. In most of the world (and especially in Western countries), governments can’t even secure their own prisons and airports, which increasingly resemble fortresses.

Furthermore, creating an effective and staffed wall for the border of the U.S. is barely even physically or financially possible. Over the course of a three-year project, the U.S. government spent $2.4 billion to build 670 miles of very unimpressive fencing along the Mexican border.

Considering the U.S. shares roughly 6,000 miles of international borders, it would cost $19 billion to construct a small, unimpressive fence along that entire border. This figure does not include the cost of staffing the fence, or the costs that would come along with making a fence large enough, the barbed wires, weapons, and a buffer zone. These additional expenses could easily double or triple the cost of the project.

Additionally, this militarized border would require an expansion of the already bloated police and surveillance states. Currently, most of the U.S. border is not even fenced or staffed with military, and there have been no major disasters as a result. Some would argue the violence along borders, particularly the southern border between the U.S. and Mexico, is an example of a major disaster that could be remedied with tighter border controls. However, it is the state and the insistence on intervening in free humans movement and exchange of goods which fuels the cartels and gangs that cluster around distribution points along the border.