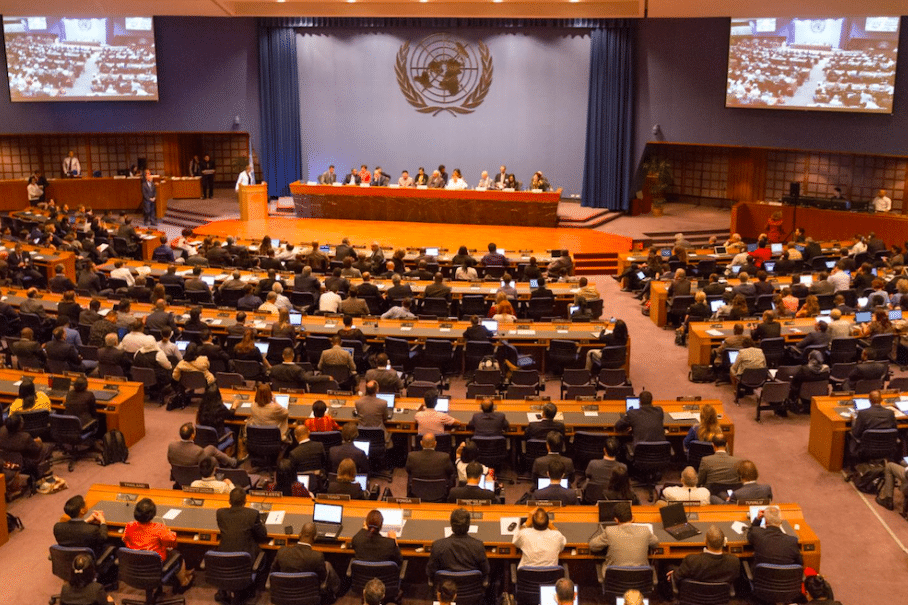 On September 4-9, 2018 diplomats met in Bangkok in the run-up to the Conference of the Parties to the United Nations Framework Convention on Climate Change (COP24) at Katowice in Poland this December. Photo credit: UNFCCC.

The irony of the latest report of the United Nations Intergovernmental Panel on  Climate Change warning that “we have 12 years to limit climate change catastrophe” several days ago, almost coinciding with the global oil supply reaching an all-time record of 100 million barrels per day in August 2018, according to the International Energy Agency, highlights the inadequacy of the Paris Agreement and the plan of the United Nations Framework Convention on Climate Change to combat climate change.

There are two significant reasons for the inadequacy of the Paris Agreement. First, within the framework of a global free market economy, the agreement calls for each country to draw up its own Nationally Determined Contributions—voluntarily. Moreover, there is no enforcement mechanism so whatever self-determined levels are put forth can hardly be considered binding.

Second, in the long-term and on a broader scale, the agreement does nothing to combat the most significant state polluters (such as China), powerful institutions like the U.S. Department of Defense, which  produce the so-called “defence mechanisms,” or the lobbying efforts of fossil fuel extractors and producers and the synergies these companies form with global policymakers. The agreement trusts that interventionism, along with engineering solutions, will gradually solve the problem, thereby putting the fate of the planet in the hands of entrepreneurs, shareholders, and senior executives. The plan, in essence, is simply to hope that the voracious appetite of capital—the very source of the problem—will rationally dictate the global course of action.

The Impotence of Voluntary, Self-enforced Targets

A cursory look at the Nationally Determined Contributions (NDC) brought forth by some of the largest global carbon dioxide emitters, such as China, the United States of America, India, the European Union, and Russia supports the contention that that the Paris Agreement is not capable of achieving significant results. Countries can—and have—brought forth either overly ambitious, unattainable goals, or entirely inadequate goals. This suggests that lack of enforcement also means that voluntary targets are not even being assessed for quality, comprehensiveness, or feasibility.

In its Intended Nationally Determined Contributions (INDC), China pledged to peak carbon dioxide emissions by 2030; “increase the share of non-fossil fuels in primary energy consumption to around 20%; and increase the forest stock volume by around 4.5 billion cubic meters” compared to 2005 levels. The United States, prior to the era of Trump, had committed to cut greenhouse gas emissions by 26-28% compared to the levels of 2005, by 2025. Of course, the United States, under climate change-denier Trump, has already pulled out of the Paris Agreement. India pledged to cut greenhouse gas emissions by 33-35% compared to 2005 levels, increase the non-fossil share of total installed power by 40%, and create a carbon sink of 2.5 to 3 GtCO2eq by 2030. The E.U., for its part, has ambitiously pledged to cut total greenhouse gas emissions by 40% compared to 1990, by 2030. Russia has submitted INDCs that can be achieved without the need for any additional regulation and the “currently implemented policies will lead to emissions […] 11% above 2015” levels, by 2030.

The concept of an NDC—and in turn, the specific INDCs proposed above—is problematic on a number of levels. First and foremost, there is no mechanism in place to formally rate an NDC vis-à-vis the maximum capacity or capability of a specific country to contribute to cutting carbon dioxide and total greenhouse gas emissions; nor to reduce the share of fossil fuels in its installed power and primary energy supply. Therefore, the leaders of any given country, possibly in alignment with the corresponding lobbies, are free to draw up the country’s plan of action as they see fit.

As mentioned above, there is also no enforcement mechanism built into the NDCs. Although several INDCs claim to be legally binding, the consequences for a party not delivering on them are ambiguous at best. The United Nations Framework Convention on Climate Change appears only to play a facilitative role. This not only means that a country escapes punishment for failing to abide by their NDCs, it also means there is no penalty for submitting a list of NDCs that is totally inadequate or impossible to attain. Although this specific approach is theoretically justified by the abused notion of ‘freedom’—that is, the freedom of large corporations to make a profit, no matter how costly that is for the population of the world—the reason for its existence is clear: it serves the interests of large capitalist interests, staunchly refusing to be forced to limit or cut their production.

The Inadequacy of Top-Down Agreements in the Long Term

The proposed policies are typically on based market- or purely engineering-based approaches. The most common market-based approaches are a tax on carbon production or a cap-and-trade system, within which different producers can trade production certificates so that the total amount produced remains the same. Both of these schemes usually include incentives for carbon offset, i.e. for avoiding the production of carbon dioxide and its release into the atmosphere. Another market-based strategy relies on the use of mandatory schemes for electricity production from renewable energy sources through so-called ‘renewable portfolio standards,’ paired with incentives (usually in the form of subsidies) for renewable energy sources that are not profitable.

Market-based approaches go hand-in-hand with engineering or technical solutions, which can be placed into five main categories

Some of the above engineering solutions can be effective and should be utilized but they cannot combat the problem of climate change on their own. Given the framework of the free market economy, so long as energy production from fossil fuels is still “profitable,” and given the large oil and gas corporations’ existing capital infrastructure, moving away from fossil fuels will not take place quickly or effectively enough.

Under the current circumstances, one of two things would need to happen for the exploitation of fossil fuels and natural resources to stop: either fossil fuels must reach depletion or alternative renewables must become more profitable. Research and development have already rendered solar energy cheaper per kwh, thus generating investment in solar panels. However, we cannot rely on market forces to reverse the trajectory of climate change with such gradual substitution of energy sources. This is also highlighted by the latest IPCC report, in which the authors say  “urgent and unprecedented changes are needed to reach the target.”

We need to act immediately, radically combating climate change on two levels using a bottom-up manner strategy. First, we need to militantly and persistently push for multilateral, binding, enforceable agreements that limit corporate power in the short term. Public opinion must be utilized; already, “roughly six-in-ten Americans (59%) say climate change is currently affecting their local community either a great deal or some” while “two-thirds of Americans who live within 25 miles of a coastline (67%) say climate change is affecting their local community at least some,” according to the Pew Research Center. Additionally, 53% of Americans believe that global warming is mostly caused by human activities, and more than 60% support strict measures to combat it, according to the Yale Program on Climate Change Communication. In order to translate this tendency in public opinion into action, we must first demand immediate, scientifically rational, and enforceable emissions-reduction targets for each country that take into account historical CO2 emissions, and, relatedly, provision of the necessary technological and financial support to less-developed (and less culpable) countries. We cannot have “just 100 companies responsible for 71% of global emissions,” backed by states that expect benefits from those companies’ profitability.

Next, we must be ready to accept that any rational plan will inevitably come into direct conflict with the “capital system,” in the words of the great István Mészáros (The Challenge and Burden of Historical Time, Ch. 3). From a subservient corporate media and a thoroughly corrupted political system, to the cold grip of imperialism and the economic logic of capital itself, the battle against climate change necessarily merges with the broader struggle against capital.  We need an economy that is driven by the peoples’ needs, not by the incentive of profitability. In the end, we must be ready to demand a new economic system altogether—a system capable of implementing comprehensive social and technical solutions constructively, centrally quantifying needs and allocating resources according to need, for the benefit of all.

Vaios Triantafyllou recently graduated from Harvard University. He is an engineer focusing on the fields of waste management, energy, and the environment.