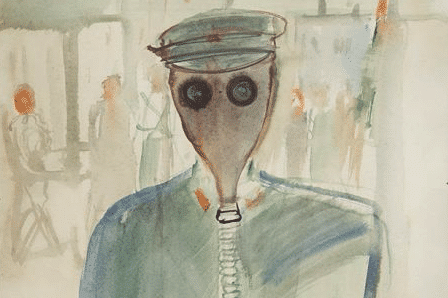 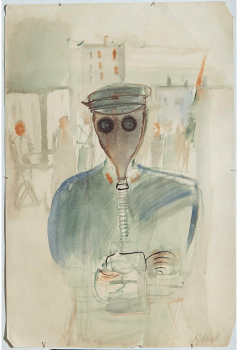 ‘We are losing the fight against famine’, said the UN’s Under-Secretary General for Humanitarian Affairs and Emergency Relief Coordinator Mark Lowcock to the UN Security Council on 21 September. He was talking about Yemen, which has been bombarded by the monstrous anger of the Saudi-Emirati guns from March 2015.

Lise Grande, the UN Humanitarian Coordinator, concurred, saying that ‘there is no other place in the world where people are suffering so greatly’. The facts are heart-breaking. Three-quarters of the population are in desperate need of basic assistance, over two million Yemenis are displaced within the country, more than half of Yemen’s 28 million people need medical help. ‘The figures’, Grande said, ‘are near-impossible to grasp’. One Yemeni child dies every ten minutes. The UN Committee on the Rights of the Child called Yemeni children the ‘innocent debris of this conflict’.

This war is the brainchild of the Crown Prince of Saudi Arabia, Mohammed Bin Salman, who has staked his prestige to a Saudi victory. Saudi Arabia said it went to war to check Iranian ambitions on the peninsula. There was and is no evidence of any Iranian influence in Yemen, nor of any Iranian military supply for the Yemeni groups that Saudi Arabia wants to annihilate. Since the reason for the war is illusionary, it is impossible for Saudi Arabia to know when it has won. If your enemy is a phantom, how do you know that the phantom has been defeated?

Allegations of war crimes have been legion, with attacks on civilians–the bombing of hospitals, schools, markets and weddings. In a strong editorial, The Irish Times calls this war ‘a shameful indictment of world powers’. The statement is sharp because the United States and the United Kingdom continue to resupply the Saudi and Emirati governments with weapons that are used in this war.

Morality plays no role here. U.S. President Donald Trump rejected any freeze on arms sales to Saudi Arabia, even after it became clear that the Saudis had assassinated the Saudi journalist Jamal Khashoggi. The United States is the world’s largest arms dealer, and Saudi Arabia is its largest buyer (twenty percent of U.S. arms sales go to the kingdom). Between 2008-2012 and 2013-2017, U.S. arms sales to Saudi Arabia has increased by 448%. No wonder that U.S. Secretary of State Mike Pompeo sat with Mohammed Bin Salman and refused to talk about the murder of Khashoggi, and then hastened to Turkey to tell the Turkish government to back off from demanding an investigation of the death–which took place on Turkish soil. Neither the U.S. nor the UK governments have an appetite to end their arms sales to Saudi Arabia.

Khashoggi had little fundamental disagreement with the Saudi regime. He had supported the Saudi war on Yemen on the grounds that Saudi Arabia had to fight Iran, but last year was disheartened by how the war had damaged the reputation of the kingdom. This was a mild critique. Nonetheless, any criticism is forbidden by the regime, which brutally murdered Jamal Khashoggi. For more on this, please see my column.

The Twitter account of Prisoners of Conscience catalogues the depth of Saudi Arabia’s version of Guantanamo–the hundreds of Saudi journalists, intellectuals and activists who disappear into the dungeons of the kingdom. There is very little attention paid to this. Among those in prison are women’s rights activists–Amal al-Harbi, Aziza al-Yousef, Eman al-Nafjan, Hatoon al-Fassi, Loujain al-Hathloul, Mayaa al-Zahrani, Nassima al-Sadah, Nouf Abdelaziz and Samar Badawi. This summer, the UN’s Ravina Shamdasani said of many of these women, ‘their whereabouts are unknown’.

The painting above is by the Soviet artist Alexander Labas, ‘Wearing a Gas Mask’ (1931). The title of this newsletter echoes a line from Wilfred Owen’s war poem, Anthem for Doomed Youth (1917):

What passing-bells for these who die as cattle?

—Only the monstrous anger of the guns.

Only the stuttering rifles’ rapid rattle

Can patter out their hasty orisons.

No mockeries now for them; no prayers nor bells;

Nor any voice of mourning save the choirs,—

And bugles calling for them from sad shires.

Both Labas and Owens were damaged by the violence of the Great War of 1914-1918. That kind of violence is the violence against Yemen. 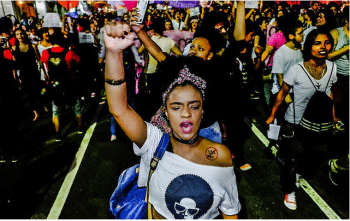 It is impossible to believe that Brazil would return to a military dictatorship, to rule by the anger of the guns. But, if the far right’s Jair Bolsonaro wins the second-round election for the presidency of the country on 28 October, the sniff of a dictatorship might be detected. In an important interview, MST leader João Pedro Stedile said that the election in Brazil is not merely an election between two candidates but a contest between two projects–that of the bourgeoisie, which has gathered around Bolsonaro, and that of the people, which has not yet fully gathered around the Workers’ Party candidate Fernando Haddad. Professor Monica Bruckmann, who teaches at the Federal University of Rio de Janeiro, told me that a Bolsonaro victory will mean a ‘regression to the darkest days of authoritarian governments in Brazil and in Latin America’ (please see my article in this Thursday’s The Hindu).

#EleNão, #NotHim, say large numbers of Brazilian people. They mean Bolsonaro. Some polls have begun to show that Haddad is gaining support. Corruption by the Bolsonaro camp might be his undoing. Whether this rise in the polls for Haddad can happen fast enough will only be seen in the evening of 28 October.

The picture above, from one Not Him march, was taken by Tuane Fernandes of Ninja Media.

The violence against ordinary people who are supporters of the Workers’ Party is shocking. It has a chilling effect in society. It is the same kind of violence that has become common against the shack dwellers’ leaders in South Africa. Tricontinental: Institute for Social Research’s coordinator Celina della Croce interviewed one of the leaders of the shack dwellers–S’bu Zikode. It gives you a sense of the resilience of the people. It is the same kind of attitude that one sees in Brazil. Not Him–But Us. That is the attitude. 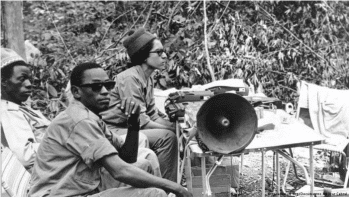 In 1992, the former U.S. government employee Francis Fukuyama wrote a landmark book, The End of History. Fukuyama argued that the major ideological conflict of the previous era had ended, that U.S.-style liberalism had won the Cold War and that ‘Western liberal democracy” is the ‘final form of human government’. Recently, Fukuyama looked back at the past few decades, reflected on the rise of ‘strongmen’ such as Donald Trump and retreated from his bold statements made as the USSR collapsed. A British journalist asked him about the return of the socialist movement in the West. Fukuyama’s answer is important to focus upon:

If you mean redistributive programmes that try to redress this big imbalance in both incomes and wealth that has emerged then, yes, I think not only can it come back, it ought to come back. This extended period, which started with Reagan and Thatcher, in which a certain set of ideas about the benefits of unregulated markets took hold, in many ways it’s had a disastrous effect.

Fukuyama’s remarks should give pause to those who entered the post-Cold War period with the arrogance that there is no alternative to monopoly capitalism. That remains the mood of the World Economic Forum, more colloquially known by the name of the place where it is held, Davos. The 1991 annual meeting at Davos had a revealing theme–The New Direction for Global Leadership. After the global financial crisis of 2007-08, the Davos theme in 2009 was Shaping the Post-Crisis World. In 1991, there was the view that the Group of Seven (G7) would lead a world of followers, and – even after a major crisis of neoliberalism–it was the same Committee to Manage the World that claimed leadership.

That Fukuyama says that socialism ‘ought to come back’ should lead us to a serious consideration of socialism in our time. This is one of the main tasks of Tricontinental: Institute for Social Research, to study the constraints in the present and to drive the possibilities for a future life into a system that we call socialism. Recently, the magazine Red Pepper (UK) interviewed me about the work of the Institute. Part of our work is to reclaim the power to imagine alternatives to the world system. That work is deeply rooted in our own idea of research,

Our idea of research is somewhat idiosyncratic. We believe that the neo-liberal capture of academic institutions has desiccated the idea of research. Scholars are trained to read the literature, find gaps in it, and then fill those gaps with their studies. These kinds of studies are then published in ‘high impact factor’ journals, which help build careers. What is left out here are the questions that are asked by movements. We take an alternative view. We believe that movements, in struggle, reveal contradictions in our social system. These contradictions are themselves questions that need to be answered by research. It is the emergence of these contradictions, rather than gaps in the literature, that lead our research questions. We are keen to research these contradictions and build up knowledge that would then be useful to movements as they continue to push against the contradictions and make history.

As our work develops, we hope that it will be able to contribute to amplifying the work of political movements and society (as in our recent dossier on Kerala) as well as developing new ways to imagine the future. Our Tricontinental: Institute for Social Research fellows Jipson John and Jitheesh PM interviewed the economist Jean Dreze who makes just these points. Jipson and Jitheesh asked Jean Dreze about the profession of economics. This is what Jean said to them:

At the end of the day, I have mixed feelings about economics or rather mainstream economics. On the one hand, it is a sophisticated discipline and there is much to learn from it if we study economics critically.

There are many brilliant scholars in the profession and many good people too. On the other, the study of economics comes with a certain amount of indoctrination, based not so much on what is being said as on what is being left unsaid.

For instance, it is possible to go through a whole PhD in economics without ever hearing about things like class, caste, exploitation, war, propaganda, corporate power and other topics that are essential to understand today’s economy and society.

Of course, there is a specialised economic literature on each of these topics, but they are not part of everyday economic thinking. It takes some time and effort to shed the blinkers that tend to come with a degree in economics.

Ideally, economists should engage not only with privileged institutions but also with citizens’ organisations, popular movements and the public at large. Some do, but there is room for more.

The picture above is of Amélia Araújo and her team taping the People’s National Assembly in the Liberated Region of Madina de Boé in 1973. They are amplifying the voices of the movements.

As usual, we are eager to hear from you (and to have you visit our website, where you can find past newsletters, dossiers, and working documents). Please do get in touch with us.

PS: The image below is of Yaa Asantewaa (1840-1921), the anti-imperialist queen mother in the Ashanti Empire (modern-day Ghana) who died 17 October 1921. In 1900, she led the War of the Golden Stool against British colonialism, declaring, ‘I must say this, if you the men of Ashanti will not go forward, then we will. We the women will. I shall call upon my fellow women. We will fight the white men. We will fight till the last of us falls in the battlefields’. 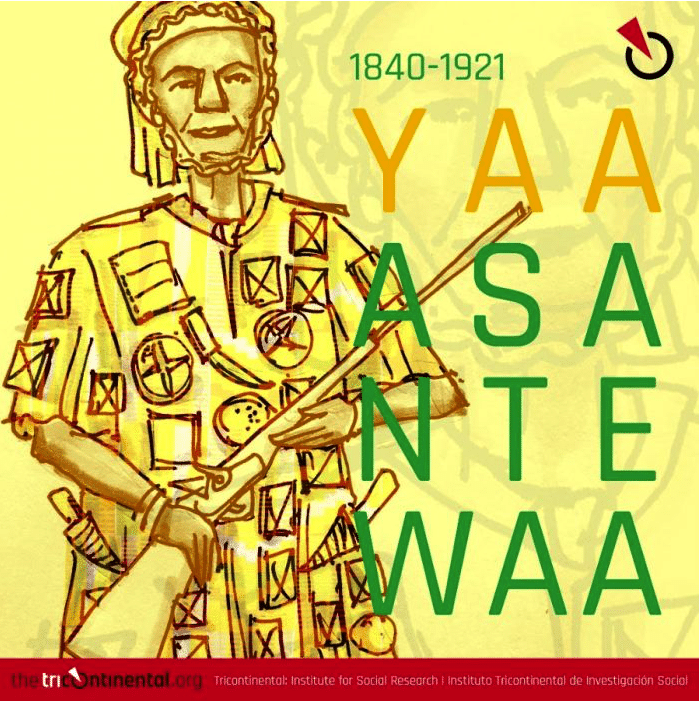