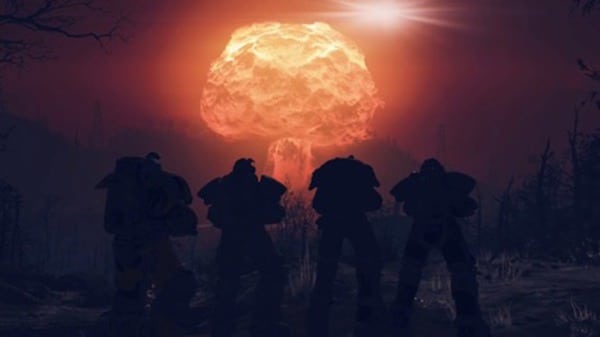 The late French filmmaker, François Truffaut, once claimed “There’s no such thing as an anti-war film”—referring to the adventure and thrill of combat, the (usually) clear-cut heroes and villains, and the opportunity for the film-maker to indulge in spectacular pyrotechnics and loud, cinema-shaking explosions of sound. And the loudest and most impressive explosion of all is the nuclear mushroom cloud.

The same may be proving to be true of video games—perhaps even more so.

Just like war movies, video games have frequently exploited the exciting and dramatic aspects of war. Yet, unlike movie-goers, gamers do not passively consume their media; instead, they make choices and influence the narrative. The result is a medium that trades heavily on visceral, simulated experience. And what could be more visceral than up-close and personal exposure to a nuclear strike?

Trading heavily on its nuclear theme, the Fallout  video game series has so far teetered between satirizing the Bomb, and reveling in its power. But now it may be toppling over that fine line.

These games are almost certainly the most well-known (and well-loved) media that deal with nuclear weapons today. Fallout  must therefore be taken seriously as an influence on the real-world politics and culture of nuclear weapons in the 21st century.

For those yet to come across them, the Fallout  video game series invite players to explore a post-apocalyptic United States, left devastated after a nuclear war with China in 2077. As the series has progressed, the developers have given the player more and more access to their own nuclear weapons. A franchise that began by mocking nuclear technologies now appears to be actively encouraging nuclear use by the players in the brand-new Fallout 76.

To be sure, the Fallout  games have never had an explicitly anti-nuclear stance; they have never come across as an after-school special. But the satirical humor of the series has frequently targeted the hubris of mid-20th century science, politics, society, and industry. The alternative universe created by the game developers diverges from our own timeline after World War II, imagining a world where dreams of robots and nuclear-powered cars came true.

Far from ushering in a utopia, however, in Fallout, nuclear technologies led to a nightmarish collapse of organized human civilization in the United States and the rest of the globe. The Bomb is only the most obvious cause. Before the war, nuclear-fueled consumerism and unchecked mega-corporations pillaged the natural resources of the continent and poisoned the environment. (The series has never been content to poke fun at the past, but often draws unflattering comparisons to our world today.) A rampant military-industrial complex led to a garrison state, social unrest, and international tension.

In short, the setting of Fallout  is hardly an endorsement of the nuclear age. As players move through the hellscape of post-nuclear war America, they are confronted by jarring relicts of the pro-nuclear age. Advertisements for the best-selling soda before the war, Nuka-cola, are everywhere. One variant of this soda was even sold with the exciting inclusion of real radioactive isotopes. All the while, players struggle to deal with finding food and water that isn’t dangerously irradiated. Take too many doses of radiation, or “rads,” and the player’s character will die. The nuclear utopianism of the past is made to look preposterous next to its horrific consequences.

Fallout 3, released in 2008, was the first in the series to give the player a usable nuclear weapon. The player is given the choice whether to disable or deliberately detonate an unexploded atomic bomb at the center of the aptly-named town of Megaton. Whichever option is chosen, the consequences are irreversible and keenly felt for the rest of the game. Choosing to detonate the bomb rewarded the player with access to a heavily-defended home in the wasteland, but permanently killed the characters who lived there, and with them a variety of adventuring and trading possibilities. Control over Megaton’s fate gave Fallout 3  a reputation for allowing the player to make tricky and consequential decisions.

Fallout 3  also saw the addition of the “Fat Man” catapult, seemingly inspired by the real-life—and horrifically dangerous—1950s-era Davy Crockett battlefield nuclear weapons system, designed to fire an atomic projectile from a device that looked not much bigger than a glorified bazooka. Fallout 3’s “Fat Man” (not to be confused with the real-life Fat Man bomb that was dropped on Nagasaki) sends “mini-nukes” across short distances, leaving the targets dismembered, burned, and irradiated. Its inclusion, and particularly the choice of name, drew some controversy at the time. Yet the game did little to encourage you to use the weapon. It is heavy, cumbersome, and has the nasty potential to kill its operator—somewhat like the real-life Davy Crockett, which reputedly once detonated its nuclear payload less than two miles from its operators during a field test. This problem is compounded in the claustrophobic ruins and subway tunnels of post-apocalyptic Washington DC, where the game takes place. In context, the “Fat Man” is a satirical gimmick—a joke included at the expense of misguided nuclear policies of the past.

Fallout 4  eroded the satire of the “Fat Man” launcher, allowing the player to customize it and providing more favorable terrain where it could be used without the constant risk of a miniature case of mutually assured destruction. The new addition of nuclear land mines could have provided an opportunity for the developers to poke fun at another real-life weapon, but instead Fallout 4’s nuclear landmines were just another addition to the player’s arsenal. In a small but significant way, Fallout 4  let the player use nuclear weapons with few practical or moral repercussions.

The new Fallout 76  has gone one step further, encouraging you and your online friends to piece together pre-war nuclear codes and then fire dormant nuclear-tipped ballistic missiles elsewhere on the map, including the option to target other players. The resulting ground-zero is then populated with rare and valuable “loot” for the players to collect, creating a new environment to be explored and exploited. Should the intense radiation become too onerous, players will be pleased to know that the effects only last a few hours—laughably out of whack with the real world in regards to the time required for the half-life of various nuclear fission products to decay to a safe level. To give a sense of the time scales involved in the real world, in order to contain the radioactive remains from the accident at the Chernobyl reactor (whose effects have been likened to a single, huge dirty bomb) engineers had to construct a 32,000-ton concrete sarcophagus, taller than the Statue of Liberty, and designed to stand at least 100 years. Which is likely to be the minimum amount of time it will take to fully clean the area, wrote the New York Times.

Handing players large nuclear weapons that only have positive outcomes for the users is a major shift in the nuclear politics of the video game series. Yes, the inclusion of usable nuclear ballistic missiles has a level of preposterousness that will likely be humorous and entertaining for the players. But equally, where is the satirical bite found in the preceding games? Where is the consequential decision-making?

The missiles of Fallout 76  are also a continuation of the Fallout  series’ ambivalence towards the actual physics of nuclear weapons. Understandably, to keep the game fun and the cities recognizable, the bombs that hit Washington and Boston leave them relatively intact. The new Fallout 76  missiles are scaled as huge, city-killing weapons—similar to the bombs that irrevocably destroyed their world for hundreds of years—yet they only temporarily destroy a small portion of the map. Making these weapons too realistic would ultimately be counterproductive—plainly, there is nothing fun about using nuclear weapons in real life. However, a larger area of destruction and permanent detrimental effects would force players to make more difficult decisions about whether to accept the risks and consequences of nuclear use.

Blending history, science-fiction, and interesting decision-making is what makes the Fallout games modern classics. And while there is no need for the series to become full-fledged anti-nuclear weapons education materials, it would help if the latest incarnation maintained the closer connections that the older entries had to the realities of our own nuclear age. Earlier Fallout games show that a humorous treatment of nuclear weapons is possible without slipping into outright ambivalence about their implications. (And yes, one can indulge in dark satire and still be outraged by the dangers of nuclear weaponry; witness movies such as “Dr. Strangelove or: How I Learned to Stop Worrying and Love the Bomb.”) What should be clear, rather, is that repackaging nuclear weapons and technologies as entirely unproblematic makes for less-interesting decisions for players and weaker ties to the historical flavor that has underpinned the unique appeal of the games.

And, perhaps most important of all, these sanitized representations risk teaching a misleading version of humanity’s nuclear predicament to a massive audience.

The author would like to thank Dan Edmonds, Sarah Fakray, and Clare Stevens for their insightful comments on an earlier draft.