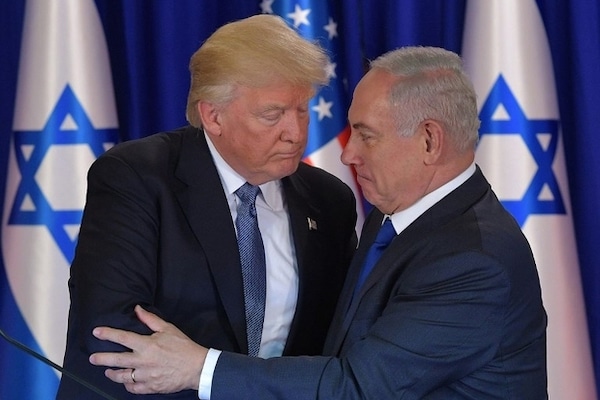 The Electronic Intifada has obtained a complete copy of The Lobby—USA, a four-part undercover investigation by Al Jazeera into Israel’s covert influence campaign in the United States.

It is today publishing the first two episodes. The Paris-based Orient XXI has published the same episodes with French subtitles.

The film was made by Al Jazeera during 2016 and was completed in October 2017.

But it was censored after Qatar, the gas-rich Gulf emirate that funds Al Jazeera, came under intense Israel lobby pressure not to air the film.

Although Al Jazeera’s director-general claimed last month that there were outstanding legal issues with the film, his assertions have been flatly contradicted by his own journalists.

In March, The Electronic Intifada was the first to report on any of the film’s specific content. We followed this in August by publishing the first extract of the film, and shortly after Max Blumenthal at the Grayzone Project released others.

Since then, The Electronic Intifada has released three other extracts, and several other journalists have watched the entire film and written about it—including Alain Gresh and Antony Loewenstein.

Now The Electronic Intifada can reveal for the first time that it has obtained all four parts of the film.

You can watch the first two parts in the video embeds above and below.

To get unprecedented access to the Israel lobby’s inner workings, undercover reporter “Tony” posed as a pro-Israel volunteer in Washington.

The resulting film exposes the efforts of Israel and its lobbyists to spy on, smear and intimidate U.S. citizens who support Palestinian human rights, especially BDS—the boycott, divestment and sanctions movement.

It shows that Israel’s semi-covert black-ops government agency, the Ministry of Strategic Affairs, is operating this effort in collusion with an extensive network of U.S.-based organizations.

These include the Israel on Campus Coalition, The Israel Project and the Foundation for Defense of Democracies.

The film was suppressed after the government of Qatar came under intense pressure not to release it—ironically from the very same lobby whose influence and antics the film exposes.

Clayton Swisher, Al Jazeera’s head of investigations, revealed in an article for The Forward in March that Al Jazeera had sent more than 70 letters to individuals and organizations who appear in or are discussed in the film, providing them with an opportunity to respond.

Only three did so. Instead, pro-Israel groups have endeavored to suppress the film that exposes the lobby’s activities.

In April, Al Jazeera’s management was forced to deny a claim by the hard-right Zionist Organization of America that the film had been canceled altogether.

In June, The Electronic Intifada learned that a high level source in Doha had said the film’s indefinite delay was due to “national security” concerns of the Qatari government.

As revealed in a clip published by The Electronic Intifada earlier this week, the film shows Julia Reifkind—then an Israeli embassy employee—describing her typical work day as “mainly gathering intel, reporting back to Israel…to report back to the Ministry of Foreign Affairs, the Ministry of Strategic Affairs.”

She discusses the Israeli government “giving our support” to front groups “in that behind-the-scenes way.”

The film also reveals that U.S.-based groups coordinate their efforts directly with the Israeli government, particularly its Ministry of Strategic Affairs.

Run by a former military intelligence officer, the ministry is in charge of Israel’s global campaign of covert sabotage targeting the BDS movement.

The film shows footage of the very same ex-military intelligence officer, Sima Vaknin-Gil, claiming to have mapped Palestinian rights activism “globally. Not just the United States, not just campuses, but campuses and intersectionality and labor unions and churches.”

She promises to use this data for “offense activity” against Palestine activists.

Jacob Baime, executive director of the Israel on Campus Coalition, claims in the undercover footage that his organization uses “corporate level, enterprise-grade social media intelligence software” to gather lists of Palestine-related student events on campus, “generally within about 30 seconds or less” of them being posted online.

Baime also admits on hidden camera that his group “coordinates” with the Israeli Ministry of Strategic Affairs.

Baime’s colleague Ian Hersh admits in the film to adding Israel’s “Ministry of Strategic Affairs to our operations and intelligence brief.”

Baime describes how his group has used anonymous websites to target activists.

“With the anti-Israel people, what’s most effective, what we’ve found at least in the last year, is you do the opposition research, put up some anonymous website, and then put up targeted Facebook ads,” Baime explains in part three of the film.

The Electronic Intifada revealed this in a clip in August.

Eric Gallagher, then fundraising director for The Israel Project, is seen in the undercover footage admitting that “Adam Milstein, he’s the guy who funds” Canary Mission.

Gallagher says that when he was working for AIPAC, Washington’s most powerful Israel lobby group, “I was literally emailing back and forth with [Adam Milstein] while he was in jail.”

Despite not replying to Al Jazeera’s request for comment, Milstein denied that he and his family foundation “are funders of Canary Mission” on the same day The Electronic Intifada published the clip.

Since then, Josh Nathan-Kazis of The Forward has identified several other groups in the U.S. who fund Canary Mission.

In March, The Electronic Intifada published the first details of what is in the film.

We reported that it showed Sima Vaknin-Gil claiming to have leading neoconservative think tank the Foundation for Defense of Democracies working for her ministry.

The undercover footage shows Vaknin-Gil claiming that “We have FDD. We have others working on” projects including “data gathering, information analysis, working on activist organizations, money trail. This is something that only a country, with its resources, can do the best.”

As noted in part one of the documentary, the existence of the film and the identity of the undercover reporter became known after footage he had shot for it was used in Al Jazeera’s The Lobby—about Israel’s covert influence campaign in the UK—aired in early 2017.

Since then, Israel lobbyists have heavily pressured Qatar to prevent the U.S. film from airing.

Clayton Swisher, Al Jazeera’s head of investigations, first confirmed in October 2017 that the network had run an undercover reporter in the U.S. Israel lobby at the same time as in the UK.

Swisher promised the film would be released “very soon,” but it never came out.

Multiple Israel lobby sources told Israel’s Haaretz newspaper in February that they had received assurances from Qatari leaders late last year that the documentary would not be aired.

Qatar denied this, but the paper stood by its story.

Swisher’s op-ed in The Forward was his first public comment on the matter since he had announced the documentary.

In it, he refutes Israel lobby allegations about the film and expresses frustration that Al Jazeera had not aired it, apparently due to outside pressure.

Several pro-Israel lawmakers in Washington have piled on more pressure by pushing the Department of Justice to force Al Jazeera to register as a “foreign agent” under a counterespionage law dating from the 1930s.

The Israel lobby goes to Doha

While the film was delayed, a wave of prominent pro-Israel figures visited Qatar at the invitation of its ruler, Emir Tamim bin Hamad Al Thani.

They have included some of the most right-wing and extreme figures among Israel’s defenders in the U.S., such as Harvard law professor Alan Dershowitz and Morton Klein, the head of the Zionist Organization of America.

Swisher wrote in The Forward that he ran into Dershowitz at a Doha restaurant during one of these visits, and invited the professor to a private viewing of the film.

“I have no problem with any of the secret filming,” Swisher says Dershowitz told him afterwards. “And I can even see this being broadcast on PBS”—the U.S. public broadcaster.

Yet it appears that Israel lobby efforts to quash the film were successful—until now.