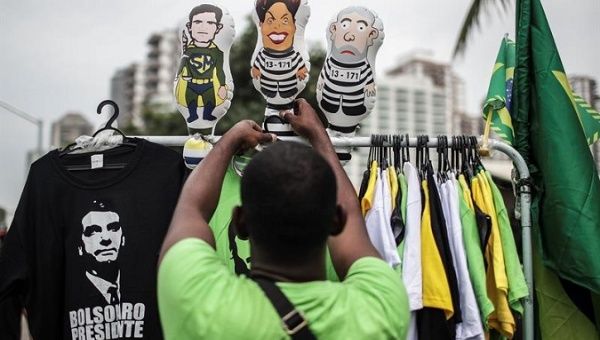 Gleisi Hoffmann, a senator for the Workers’ Party (PT) submitted Friday a bill to stop a presidential decree signed by un-elected president Michel Temer, which the PT claims would “legalize political persecution in the country.”

In her statements, Hoffmann warned that the “intelligence task-force” created by Temer would have the capacity to “violate the privacy of any citizen without limits, monitor and criminalize social movements and organizations that advocate for civil rights.”

The task force would include Brazil’s National Security Cabinet, the Brazilian Intelligence Agency, the Navy, Air Force, Army, the Ministry of Finance, the Secretariat of Revenue, and all the police.

The PT and other left-wing opposition groups fear that the decree would pave the way for Brazil’s newly-elected far-right president Jair Bolsonaro to apply the “firm-hand” approach to curbing insecurity he boasted of during the campaign trail.

Bolsonaro, who has endorsed the use of torture and praised Brazil’s military dictatorship (1964-1985), vowed to expand the use of Brazil’s military police to ensure internal security despite the fact it has resulted in more deaths for Brazilians who live Rio’s favelas. The far-right politician has also promised to purge the country from left-wing “crooks.”

“These red outlaws will be banished from our homeland. It will be a clean-up, the likes of which has never been seen in Brazilian history,” he warned back in October. In his first interview after winning the presidential election, Bolsonaro also referred to Brazil’s Landless Workers’ Movement (MST) as terrorists and said there will be no dialogue with them.

The task force was created on Oct. 15 via executive decree with the goal of “fighting organizations that attack the state or its institutions.” Analysts are particularly concern over the vagueness of the term, which could include unions that declare a general strike or the MST’s, which occupies land held by large landowners.

This is not Temer’s first suspicious policy action. During his administration, a general was appointed to head Brazil’s Defense Ministry for the first time since the return to democracy. Temer was also responsible for militarizing Rio de Janeiro and signed a decree ensuring that any case of military violence in Rio would be tried by a military court instead of a civil court.