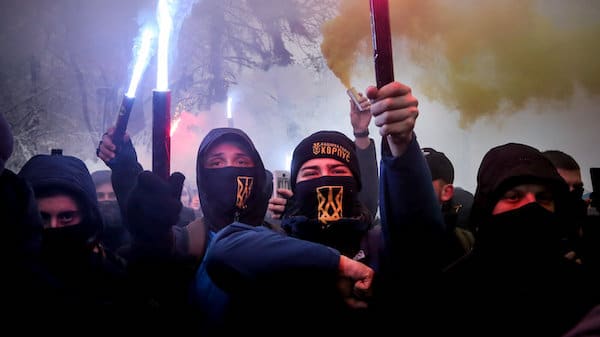 Seemingly out of nowhere, Ukraine nearly declared war on Russia over the weekend after a confrontation in the Kerch Strait, which straddles Crimea and the Russian mainland, between Ukrainian naval boats and Russian authorities that resulted in Russia seizing three Ukrainian navy vessels and 24 Ukrainian sailors.

Ukraine has accused Russian ships—with no provocation—of ramming a Ukrainian tugboat and opening fire on Ukrainian gunships, injuring six Ukrainian sailors. Russian authorities have justified those acts by claiming that the ships were illegally in Russian waters at the time, did not follow normal protocols for passing the strait, and made “dangerous maneuvers” in close proximity to Russian vessels. Russia has claimed to have evidence that the incident was a “prepared and orchestrated” provocation on the part of the Ukrainian government and also stated that it would make this evidence public in the near future.

As a result of the incident, an emergency meeting of the UN Security Council was announced by the U.S. ambassador to the UN Nikki Haley, which took place early Monday and saw Haley slam Russia for its actions in the Kerch Strait. During the meeting, Haley called Russia’s actions “arrogant” and “outrageous” and said that the event makes the normalization of U.S./Russia ties “impossible.”

In contrast, the European Union called for “restraint” on both sides and urged both Ukraine and Russia to take all steps necessary to “de-escalate” the tense situation. Yet, like the U.S., the EU accused Russia of violating Ukraine’s sovereignty through its recent actions in the Kerch Strait.

In response, Ukraine’s government–which has been supported by the West since it came to power in a 2014 coup–has taken extreme measures and has moved to declare martial law in areas of Ukraine bordering Russia, which will take effect on November 28 and is expected to continue through late January. 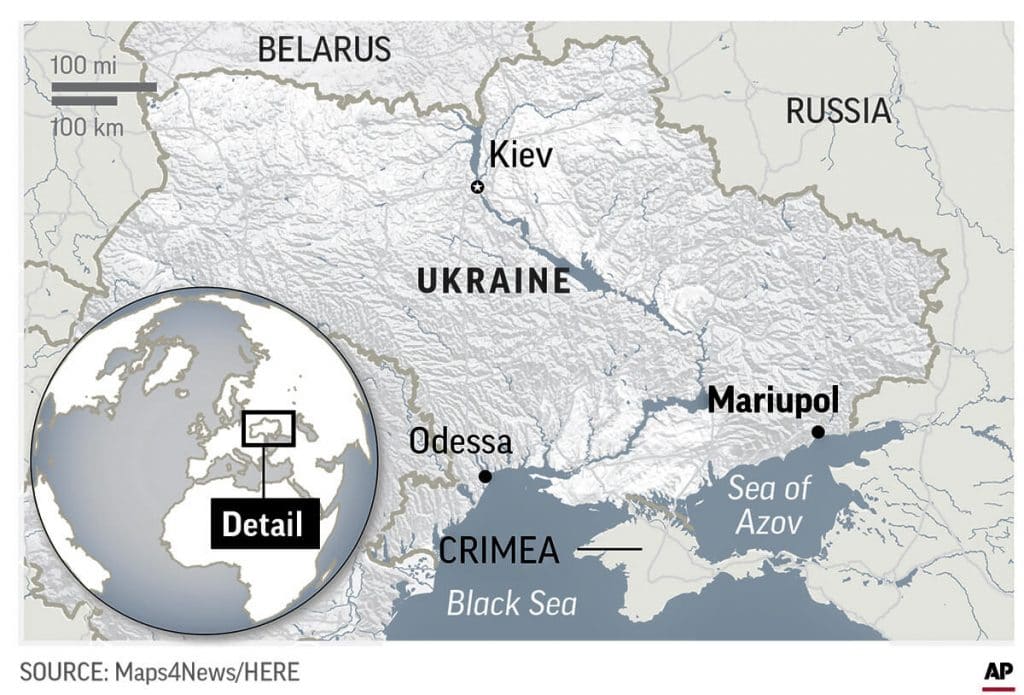 The declaration of martial law has been criticized, given that Ukrainian elections are expected to take place this coming March. Current Ukrainian President Petro Poroshenko is widely expected to lose that election, given his failed economic policies and burgeoning corruption scandals, leading his critics to suggest that the declaration of martial law is a thinly disguised attempt to maintain his hold on power.

This is likely part of the motivation given that Poroshenko is lagging in the polls and several mainstream analysts have noted that the pretext for martial law–the alleged ramming of a tugboat–does not warrant the implementation of such a drastic policy. Furthermore, the text of the decree declaring martial law states that the people’s right to “elect or be elected” could be suspended under martial law if it is still in effect at the time of elections.

The push for martial law in Ukraine was preceded by calls by Ukraine’s National Security and Defense Council to declare war on Russia. That council is headed by Oleksandr Turchynov, who played a significant role in the 2014 coup and is closely linked to disgraced former Ukrainian Prime Minister Yulia Tymoshenko. He has claimed that Russia is “at war” with Ukraine on several occasions since 2014.

Though Ukraine’s declaration of war on Russia has not yet materialized, it still remains a strong possibility. Indeed, Poroshenko–in his televised address stating his approval of martial law nationwide–said that Ukrainian intelligence services provided him information showing that Russia is preparing a major ground attack targeting Ukraine and that martial law was necessary to ensure security. Poroshenko did not make this intel public or elaborate on it in any way other than waving a small stack of papers he claimed contained written proof of the alleged planned “invasion.”

Ukraine unlikely to be freelancing

This is both important and troubling for several reasons. First, it is widely recognized that Ukraine’s military is poorly equipped to fight a major war against Russia. Ukraine’s government would not declare war over the alleged ramming of a tugboat, particularly if it was widely expected to lose. Thus, if and when Ukraine declares war against Russia, it seems certain that it is counting on other countries to come to its aid and join the fight.

In that event, it is almost certain that the U.S. would aid Ukraine in a future war with Russia, given that the U.S. is largely responsible for putting the current Ukrainian government in power and has poured millions of dollars into funding and training the Ukrainian military and even controversial Neo-Nazi militias that compose part of Ukraine’s National Guard. In addition, Ukrainian politicians have stated in the past that they would expect U.S. military support if Ukraine and Russia ever went to war. 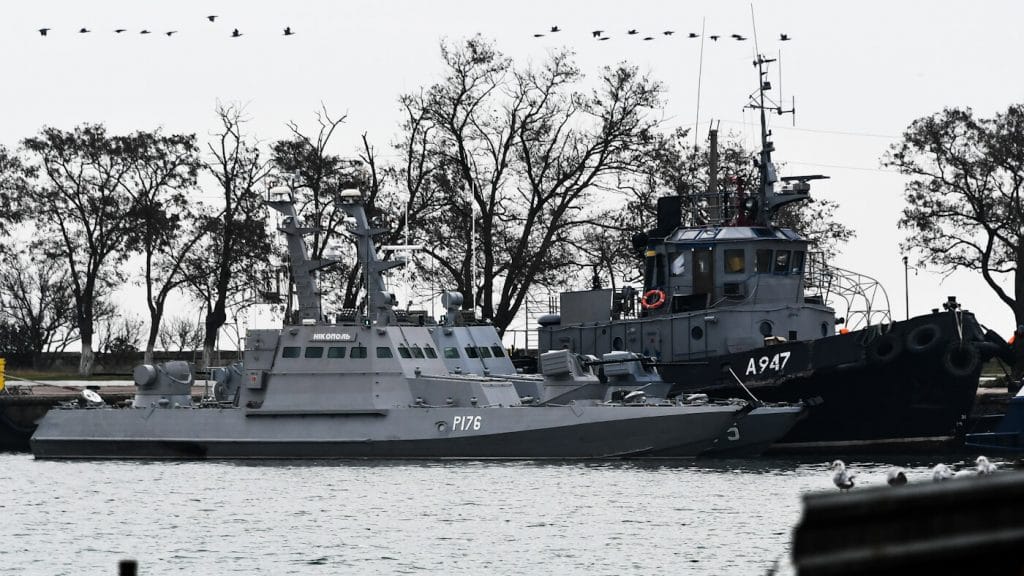 NATO’s involvement in such a war seems likely as well, given that NATO Secretary-General Jens Stoltenberg recently warned that “Russia has to understand that its actions have consequences.” Though he did not elaborate specifically on what those consequences would be, his comments come amid NATO’s unprecedented military buildup along Russia’s Western border that followed Crimea’s decision to become part of Russia in 2014.

Furthermore, it has been noted for years that the U.S. and NATO have been preparing for a large-scale war with Russia, a fact supported by the U.S.’ current National Defense Strategy. The U.S./Russia proxy conflicts in both Syria and Ukraine have been cited in the past as likely catalysts for such a war.

U.S. moves its proxy war around

That last point makes the timing of this incident and the ensuing tensions between Ukraine and Russia particularly noteworthy. Indeed, past incidents that have seen tensions surge between Ukraine and Russia over Crimea have been preceded by developments that negatively affected the U.S.’ involvement in its other proxy conflict with Russia in Syria.

For instance, as MintPress reported last August, the Trump administration’s decision to stop arming radical Wahhabist militants in Syria was soon followed by the administration’s decision to provide lethal arms to the Ukrainian government—after it became clear that the U.S.’ likelihood of winning its proxy war in Syria by overthrowing Syrian President Bashar al-Assad had become very slim.

MintPress noted at the time:

With the curtain closing in Syria, Washington needs a new proxy war. Given that containing Russia is the ultimate goal–as it is with China–what better way to step up the pressure than by sending lethal arms to a rabidly anti-Russian, U.S.-backed government in Kiev that is determined to ethnically cleanse Russians? Ukraine, after all, is right on Russia’s border; and the Crimea region, which Poroshenko is determined to return to his control, is now a part of Russia.

Now, we are seeing a repeat of those same circumstances. In Syria, the U.S. has failed in its efforts to prevent a Syrian military operation against the Idlib province, which is now undeniably ruled by Syria’s al Qaeda branch, currently operating under the name Hayat Tahrir al-Sham (HTS). With HTS having launched a chemical-weapons attack against Syrian civilians in government-controlled Aleppo this past Saturday, any future U.S. call to threaten the Syrian government over military action in Idlib would stand on even shakier ground.

With the Syrian government now preparing to launch a major assault against the terrorist-controlled province, the U.S. is likely desperate for international attention to be focused on another conflict, particularly one it can use to advance its broader geopolitical goal of “containing” Russia.

Conveniently for the U.S., the recent tensions in Ukraine have taken media attention away from the al Qaeda-launched chemical-weapons attack and allowed the U.S. government to avoid commenting on the issue entirely, as Ukrainian concerns have dominated the UN Security Council’s attention. As has been the case in the past, it seems that the U.S.’ botched proxy war in Syria will see Washington seek to revive the proxy war in Ukraine, given that countering Russia is the focus of the U.S. military’s current National Defense Strategy.