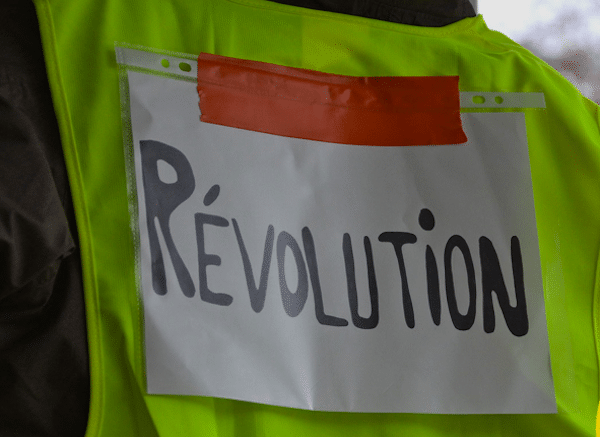 Yellow vests have changed the political landscape of protests in France.

Since November 17, France has been witnessing the massive Gilets jaunes or ‘Yellow Vests’ protests against the anti-working class policies of the Emmanuel Macron government. The protests against the rising economic burden on the people are also spreading to many other European countries. Peoples Dispatch spoke to Cyril Benoit, in-charge of international relations in the Mouvement Jeunes Communistes de France (MJCF), about the characteristics and the orientation of the ongoing protests. MJCF, the first political youth organization of France, which is close to the French Communist Party, is commonly known as JC.

Peoples Dispatch (PD): What are the characteristics and causes of the current unrest in France? What role has the left played in these protests?

Cyril Benoit (CB): The trigger for the current movement [Yellow Vests] was the announcement by the Emmanuel Macron government of an increase in the taxes on fuel, labeled “carbon tax”. This lead to a call on social media to oppose this measure by wearing yellow vests that are mandatory for motorists. All over the country, people mobilized–many of whom had never done so before–and occupied roundabouts and protested in cities, sometimes violently.

This movement is very heterogeneous. It was generated outside political parties and unions, with no leadership and no clear objectives apart from the cancellation of the hike in the carbon tax. Thus, its characteristics vary greatly from place to place. Particularly at the beginning of the protests, while some yellow vests protested the inequalities and pro-bourgeois policies of the government, others committed racist, Islamophobic and anti-migrant acts. We must always keep in mind this element and actively prevent the extreme right from applying its plan to lead the movement.

However, as the protests went on, and the repression increased and the government responded with its usual contempt, the demands evolved from purely anti-tax ones to broader, social and economic ones. For example, the demand for the reinstatement of the “solidarity tax on fortune” is now central. This tax that was applied to the wealthiest households was suppressed at the beginning of the year, a clear sign that this government is one of the rich, for the rich.

Another characteristic of the current movement is the strong use of repression against protesters. On December 8 alone, 1,723 people were arrested and 624 injured, according to official statistics. The police have used armored vehicles in the streets of Paris and all across the country, protesters and high school students have suffered head injuries due to the rubber balls shot at them. Many suffered broken jaws and ruptured eyes. In Bordeaux, a young man lost his hand because of an explosive grenade thrown by the police.

It is impossible to talk about a leadership of any specific political force in the current mobilization. Nevertheless, we communists are actively supporting the protesters and their demands, explaining the real causes of the situation in the country and promoting our proposals for a different social, economic and political system. This is of crucial importance to us, so as to counter the reactionary forces and give a progressive outcome to the movement.

To sum up, we can say that we have gone from a movement against taxes to one against fiscal inequalities and for better wages and pensions. A clear sign of this is that the announcement by the prime minister that the carbon tax would be scrapped did not weaken the protests. Similarly, the announcements made by Macron last Monday (cancellation of tax on pensioners, asking the bosses to give an exceptional bonus to their workers, etc.) have not had a significant impact on the social anger. However, it is unclear how the recent attack in Strasbourg will affect the movement.

PD: What is your take on Emmanuel Macron’s policies, especially on immigration, austerity and human rights, including the rights of workers, students, women and youth?

CB: Since he has taken office, Emmanuel Macron has implemented a real ‘social blitzkrieg’–a violent offensive on the achievements and rights of the French working class and people. These policies are inscribed in the neoliberal agenda that has been pursued by his predecessors for decades: less public spending, privatizations and deterioration of labor laws. However, Macron has used a more violent method, supported by his absolute majority in parliament. By implementing one reform after another, he has made it much more difficult for the left, the unions and popular movements in general to respond.

However, the first half of 2018 saw the first sustained and coordinated answer, with the strikes and movements of railway workers and high school and university students. Although they were not successful, they set an example and contributed to creating the possibility for the current protest movement by eroding Macron’s popularity and broadly identifying him as the ‘president of the rich.’ This image is now at the core of the Yellow Vests movement.

As always with neoliberal policies, the youth have been one of the most affected groups by the reforms. They have suffered attacks on public housing or the withdrawal of ‘aided jobs’, among other measures. But one of the main attacks of the government has been on public education, with a persistent lack of funding for public universities and the establishment of a selection to enter higher education, for which previously, the bachelor’s degree was the only condition. Approved last year, this reform has already deprived many youth of the possibility of studying, many of whom come from working class families.

Foreign students from non-EU countries are also being targeted through the current project of raising the registration fees up to 3,770 euros for a master’s degree. Until now, they were paying the same as French students. This has prompted a rejection movement that is currently growing in universitie 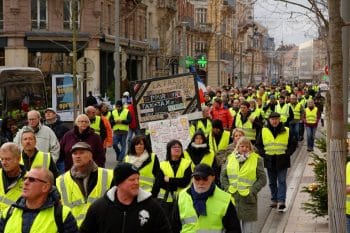 PD: How do you see the rise of the ultra right under the leadership of Marine Le Pen in France? What are the characteristics of this movement and the reasons for the spike in their visibility?

CB: As elsewhere in Europe, and in the world, the rise of the extreme right poses a great danger in France. In the current crisis, Marine Le Pen and her party have been used by the government to try and both divide and soften the Yellow Vests movement. The participation of extreme right and fascist groups in the protests is real, but the media and officials have deliberately exaggerated their influence in order to prevent other kinds of groups from joining by saying, “if you go to the protest, you will be siding with fascists”. However, on some occasions, protesters themselves kicked out the fascists and, as I mentioned before, the evolution of demands towards more progressive ones has marginalized the influence of these groups.

As for the second aspect, Marine Le Pen has from the beginning tried to divert the movement from its social and economic goals by trying to make it an anti-migrant one. She then publicly rejected the demand that the minimum wage and pensions be raised, clearly demonstrating that she is in no way “anti-system” as she pretends to be. More recently, after the Strasbourg attack, she has called for the protests to be canceled at the very moment Macron is stepping back.

PD: What are the leftists’ initiatives in addressing this issue and the leftist alternative that you can propose in this situation? Could you also explain the position of the PCF (French Communist Party) specifically and that of the broad left in general. How can you achieve this by tackling Macron and resisting the ultra right simultaneously?

CB: At every level, the communists are actively supporting the Yellow Vests movement. For example, in communist municipalities, books have been put at the disposal of the population for everyone to write down their concerns and proposals. Similarly, communist MPs and senators have visited protesters and noted their concerns, which they then read out in the National Assembly or the Senate, so the voice of the workers could be directly transmitted to the highest levels.

The Yellow Vests movement is not just about the rise in the fuel tax. It is a crystallization of a deep social discontent and distress. It has already proved that a strong popular mobilization can force the government to flinch. The anger against the hike in one tax has already evolved into one against a government and a president “disconnected from the people” and their policies. The task is now to demonstrate that it is the neoliberal model and the capitalist system that are the root causes of this situation.

As the Young Communists Movement of France, we are particularly involved in the struggle of high school and university students, who are protesting against the reform of bachelor’s degrees, for the withdrawal of the hike in registration fees for non-EU students, for the suppression of selection in universities and against repression. This is for a free, universal and equal access to education.

Even if much remains to be done to achieve real change, it is the first time since Macron took office that he has been forced to do so. Despite the uncertainties, this first crack will strengthen our struggles and may well change the course of his presidency.