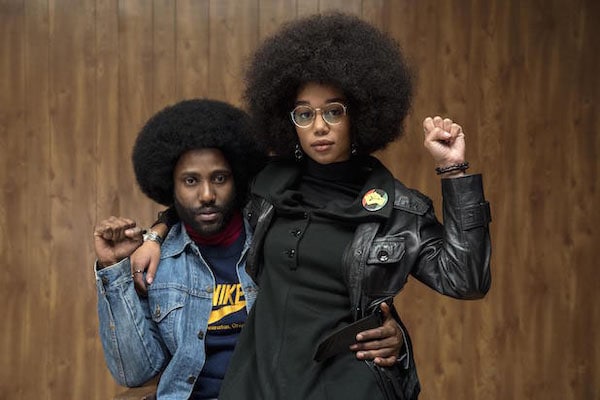 Peak TV is creating more opportunities for independent film directors, and for new stories to be told. More films from around the world are released on streaming every day, and Netflix spent an estimated 13 billion dollars on content just this year. More cash available can sometimes mean more stories by and about communities of color, women, transgender and gender nonconforming people, and other communities Hollywood has long ignored. But the movie industry is still primarily about making profit, and it’s main business is reinforcing the status quo, including churning out films that glorify capitalism, war, and policing.

Below are 2018’s top ten conscious films that made it through these barriers, plus twenty more released this year that you may want to check out.

It was a year for independent dramas with a range of tones. One of the year’s best was Disobedience, a lesbian romantic drama set among London’s Orthodox Jewish community. The film is the latest from Sebastián Lelio who won an Academy Award for last year’s excellent Fantastic Woman. Support The Girls is a light-hearted low-budget drama from mumblecore director Andrew Bujalski set in a Hooters-esque “breastaurant,” and featuring excellent performances from Regina Hall and newcomer (and indie rapper) Shayna McHayle. Winter’s Bone director Debra Granik returned with Leave No Trace, once again exploring the lives of impoverished people on the edges of society with the story of a man raising his daughter in the Oregon woods.

In a sign of the times we live in, two films this year dealt with “gay conversion therapy.” Desiree Akhavan’s The Miseducation of Cameron Post is the better, and lighter in tone, of the two (the other was Boy Erased). Karyn Kusama’s Destroyer is grounded in an excellent performance by Nicole Kidman as a bad cop seeking redemption in a film that avoids glorifying police. In Tully, Charlize Theron is driven to the edge of sanity by the trials of motherhood. Director Jason Reitman and writer Diablo Cody, previously collaborated on Juno and Young Adult.

After making great films in the late 90s (Girl’s Town and Our Song) director Jim McKay has been mostly working in prestige TV (The Wire, Mr. Robot, Breaking Bad). In his return to theaters for the neorealist En El Septimo Dia, McKay examined a week in the life of undocumented Latino immigrants in Brooklyn. Private Life, Tamara Jenkins’ third feature in twenty years (after Slums of Beverly Hills and Savages), explores an east village bohemian couple in their early 40s who are seeking to have a child, and navigating medical and legal options. Yorgos Lanthimos has made some of the strangest films of this millennium with Dogtooth, The Lobster, and The Killing of a Sacred Deer. The Favourite, his newest, is his first historical drama, and it’s weird and anachronistic and not for everyone.

In Wildfire, Carey Mulligan and Jake Gyllenhaal are both suffocated by trying to conform to the roles assigned to them as housewife and husband in 1960s Montana. Actor turned director Paul Dano gets strong performances in this story of a dysfunctional family and the social roles that create that dysfunction. Sandi Tan’s Shirkers is a documentary that feels like a drama, as the director tries to uncover the mystery of the man from New Orleans who stole the footage of the feature film she directed as a teenager in Singapore, 25 years ago.

Hollywood doesn’t have a great record in covering presidential politics (remember Kevin Costner in Swing Vote?). Vice, comedy director Adam McKay’s follow up to The Big Short, explores the Bush/Cheney presidency, attempting to make history and polemic accessible to a wide audience. It’s not as effective as his previous film, but it’s a good history, especially for those less familiar with the ins and outs of the early 2000s corporate power grab. Fahrenheit 11/9, the latest from Michael Moore, is both exactly what you think it is, and also better than you expect, finding some new angles to view the current political dumpster fire we find ourselves in, and some reasons for hope.

The sunny suburbs are full of double crosses and duplicity in Paul Feig’s comedy-thriller A Simple Favor, starring Anna Kendrick and Blake Lively as suburban housewives with secrets. Each bad decision leads to horrifying consequences in Matt Palmer’s feature debut Calibre, a thriller set in the Scottish highlands. Aneesh Chaganty’s Searching has a gimmick – it’s a thriller that takes place entirely on computer screens. But the film’s twists and surprises and excellent lead performance by John Cho never feels held back by its central conceit.

The gentleman bank robber, stealing from hated institutions to redistribute the wealth (at least to themselves) is a Hollywood cliché, but David Lowery’s The Old Man & the Gun is better than most, partly because of central performances by Robert Redford, Sissy Spacek, and Casey Affleck, in a cast that also includes Danny Glover and Tom Waits.

We are living in a golden age of horror films. While no film this year had the brilliance or socio-political weight of 2017’s Get Out, there were several great films exploring variations on horror, sci-fi, and suspense. Toni Collette gave a powerful performance in Ari Aster’s Rosemary’s Baby-esque Hereditary, the scariest of the group. Former webcam model Isa Mazzei wrote Cam, a horror film directed by Daniel Goldhaber, to challenge Hollywood’s depiction of sex work. Green Room director Jeremy Saulnier’s Hold The Dark is more of an elliptical supernatural mystery than horror, starting with a missing child in a small village in Alaska and launching in surprising directions from there. Mandy, directed by Panos Cosmatos and starring Nicholas Cage in an over-the-top performance that has already brought the film a cult following, is not for everyone – it’s violent, bloody, and more acid trip than movie. Justin Benson and Aaron Moorhead write, direct and star in the low-budget, and bracingly original, sci-fi horror film The Endless, about a mysterious religious cult. The less you know about Border (Gräns), by Iranian-Swedish director Ali Abbasi, the better. So I’ll just say it’s a fantastical and strange love story based on a short story by the author of Let the Right One In.