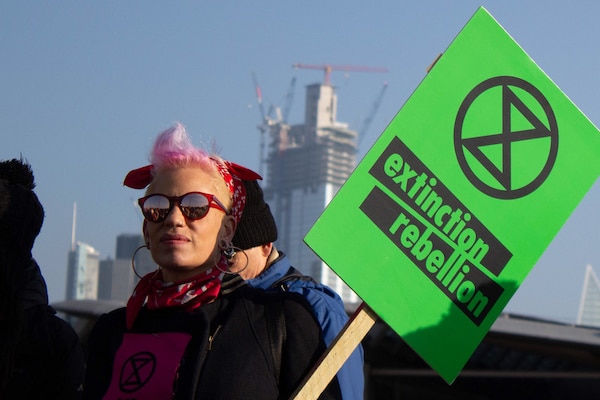 With high-profile direct actions across London, the Extinction Rebellion (XR) movement has captured media headlines, garnered influential supporters, and inspired a wave of participants across the globe. From blocking bridges to occupying government departments, XR has sounded alarm bells at the extinction before us, demanding a more radical response.

As global carbon emissions surge, and extreme weather ravages communities from Iraq to Uganda, the need is certainly acute. Many have indicated that the emergence of XR marks a step change in the fight to tackle climate change, with the movement well-positioned to break the deadlock of past activism, and usher in a new phase of invigorated climate politics. Even the Financial Times has paid notice to the fact that ‘tediously law-abiding, taxpaying homeowners’ are now among the activists getting arrested and taking action.

On November 17th, as thousands of XR participants blocked bridges across the Thames, just hundreds of yards away, 30,000 people marched as part of a major demonstration against racism and fascism. This moment symbolises perhaps one of the greatest obstacles to the systemic change we need, as surmised by sociologist Boaventura de Sousa Santos: ‘the tragedy of our time is that domination is united and resistance is fragmented.’

As XR sets its sights higher and expands internationally, the need for a critical conversation about its role and potential within a more potent global climate movement gain importance.

XR’s national and international visions include three core demands: 1) that governments tell the truth about the ecological crisis, 2) initiate a WWII-scale mobilization to achieve net-zero emissions by 2025, and 3) participatory democratic processes to oversee the changes.

The movement’s primary tactic is rebellion through non-violent direct action (NVDA). While NVDA has been widely-employed by climate movements both in the UK and internationally, XR envisions an unprecedented escalation through mass mobilisation, civil disobedience, and arrests. As philosopher and prominent XR participant Rupert Read noted: ‘Our long-term aim is to create a situation in which the government can no longer ignore the determination of an increasingly large number of people to shift the world from a direct course towards climate calamity.’

A common idea discussed in XR circles is that a ‘mass arrests’ strategy and mounting media attention will eventually lead to a dramatic tipping point. Some of this theory draws on research on the role of ‘mass arrests’ in historical movements, and what political scientist Erica Chenoweth calls the ‘3.5% Rule’: historical movements have required the ‘active and sustained participation’ of that percentage of the population to topple dictatorships.

XR’s messaging has also actively diverged from previous softer environmental framings in its starkness, with the movement proclaiming that ‘we will not be led quietly to annihilation by the elites and politicians’, and ‘we refuse to bequeath a dying planet to future generations.’

At the centre of XR is a desire to ‘tell people the truth’ about our ecological crisis, putting an end to decades of sugar-coating. Among its targets was Greenpeace, confronted for an approach of ‘positivity’ that ‘does not work when faced with ecological and societal collapse.’

XR has certainly injected welcome energy into the climate conversation and brought a renewed focus to civil disobedience as one of the few tools commensurate with the magnitude of the climate crisis. The movement’s recognition that our ecological crisis is a systemic problem, and that only bold solutions will do, is also similarly healthy. But key doubts remain.

XR’s commitment to a more truthful discussion about our climate crisis is honourable, but it raises an implicit question: what kind of truth? To approach climate change is to enter a terrain of discomfiting realities. There are truths about the UK’s disproportionate responsibility for the climate crisis, the disastrous socio-ecological role played by British companies across the world, the climate reparations owed by the UK, the tectonic economic changes required to achieve zero emissions, and the unforeseeable downstream consequences of environmental policy.

XR’s vision also lacks detail. Its principle demand–“net zero emissions by 2025”–is in itself highly ambiguous, and compatible with a plethora of economic proposals. We need more detailed demands and policy footholds that can allow for clearer campaigning across the political spectrum.

Furthermore, the charges of privilege levelled at XR’s strategy need to be carefully understood and addressed. Provoking mass arrests may be strategically useful at times, but only includes those able to risk incarceration in a criminal justice system riven by institutional racism.

These questions are not aimed as abstract critiques, but as invitations to a constructive conversation: how can XR build power to better contribute to tackling our systemic crisis? Two principles can offer us useful guidance: connection and equity.

For too long, the environmental movement has succumbed to a thinking of simplicity and separation. Nature is conceived as an entity separate from human beings, that needs to be protected. The environment is a separate issue, only loosely related to issues of health, the economy, or education. Such arbitrary divisions have led to siloed and segmented movements, wedded to single-issue campaigns.

This thinking of separations ironically runs counter to the nature of ecology, which is fundamentally concerned with the connections that sustain life. To put on the glasses of ecology is to see a world of intersections and interactions. It is to realize that common threads bind together environmental destruction, inequality, racial exclusion, poor health, violence, patriarchy and poverty.

Climate change is an emblematic example. Climate violence unravelling the world over is always the product of two things: extreme weather (exacerbated by climate change), and extreme deprivation. To be concerned about our ecological crisis should rather mean a more expansive concern for the excessive emissions that inflame weather and the excessive injustices that turn weather into disaster. This broader understanding compels us towards two strands of action: boldly transforming our economies to reduce emissions, and boldly transforming our societies to reduce the inequalities that make us vulnerable.

This more expansive and integral approach sees the fight against climate change as an opportunity to win in multiple ways. Movements to confront the drivers of our ecological crisis can be movements to confront the precarities of our economies, the toxicity of our environments, and the poverties in our societies. We can use problems to tackle other problems: climate change and inequality through a Green New Deal; excessive emissions and toxic air quality through bold sustainable mobility schemes; fuel poverty and dirty energy through clean energy programmes.

Building power ultimately lies in building connections. As activists Cameron Joshi and Boden Franklin write, ‘We need to remember that being part of an integrated ecology of movements is much more threatening to entrenched power than acting in isolation. This was true for the civil rights and anti-colonial movements that Extinction Rebellion gains inspiration from, and it is true now.’

Ultimately, the environmental movement needs to clearly spell out what an ecological transition could look like, and the significant benefits it could furnish to ordinary people. The empty ambition of ‘doing more on climate change’ has to be tied to concrete and resonant goals: creating millions of dignified jobs, building more liveable cities, reversing austerity, improving health, and allowing people more time to live fuller lives.

Climate change by nature is a global problem. But the radical repercussion of this fact is that we are bound up to each unlike ever before. Movements in the UK rely on the strength of Chinese, Indian, and Russian efforts to transform their economies; similarly, communities the world over rely on the strength of British movements to address their own responsibilities. The key question becomes: what can we do from our respective positions and opportunities, to support the other? Where should our political energy be directed?

There is much to be done, but from a perspective of climate justice, there is a great need to challenge the insidious role played by British institutions in furthering the climate crisis and delaying a meaningful response. The City of London in particular is a ‘carbon haven’, financing, developing and underwriting carbon-intensive projects the world over. Dozens of extractive companies registered in the London Stock Exchange and Alternative Investment Market, are driving the devastation of ecosystems and the communities that sustain them around the world.

Civil disobedience targeted against entities in the Global North driving these projects could be both highly effective, and a clear expression of alliance and solidarity with communities in the South, whose daily efforts of resistance under far more restrictive circumstances are largely unnoticed by traditional environmental movements.

Solidarity can also mean learning and drawing inspiration from innovative movements the world over, such as the political pressure ramping up to support a Green New Deal in the United States, or bold movements for agro-ecology and food sovereignty in the Americas. For some of the world’s most potent social movements, climate injustice is a part of a more expansive diagnosis of our systemic challenges. In India, farmers movements have been mobilizing, calling for the Indian parliament to comprehensively address India’s agrarian crisis. The movement is popularising a transformative alternative to the country’s current agricultural model, where debt, destitution, abandon, and climate change have combined to leave the country’s rural families in a situation of crippling precariousness. The bold strategies and resonant messages of such movements have much to teach Northern movements about how climate change can fit in a broader picture.

Social change is inordinately complex, and with a problem as dense as our ecological crisis, there are no quick fixes or formulas. To shake up the inertia of the status quo, we will have to organize, mobilize broad bases, popularize visions and make what is currently marginal common sense. We need to be both defensive and future-oriented, resisting the undesirable while rebuilding the new.

We will require a range of tactics–from direct action to strategic political engagement–that are all escalated in mutually supportive ways. Efforts should ripple across all levels of politics: in city councils, through parliaments, across international institutions, and within our own neighbourhoods. Creative protest, popular education, building economic alternatives (platform cooperatives, community energy stations), tactical local campaigns, bold electoral alternatives, can all shift parameters, create defining moments and unlock changes.

We will need to move away from movements of simplicity and uniformity, to ones that embrace complexity and plurality. Crucially, we need to start assembling significant coalitions, transcending horizontal hostilities to braid a movement in many voices. One where struggles against oppression, fascism, precarity and destruction can gain common cause.

Ultimately, all movements embody their name: they ebb and flow, shifting with time. XR is an emergent movement, still finding its feet and voice. Its innovations and energies give us much-needed hope, while its blindspots and limitations offer concern. But if XR can place accountability, solidarity, and a commitment to connection at its heart, it can do much to impel the social transformation we sorely need.

Daniel Macmillen Voskoboynik is the author of several books including ‘The Memory We Could Be: Overcoming Fear to Create Our Ecological Future’

“Activists shall not fear, we are fighting for justice” – MST’s Stedile
Why are 200 million workers on strike in India?