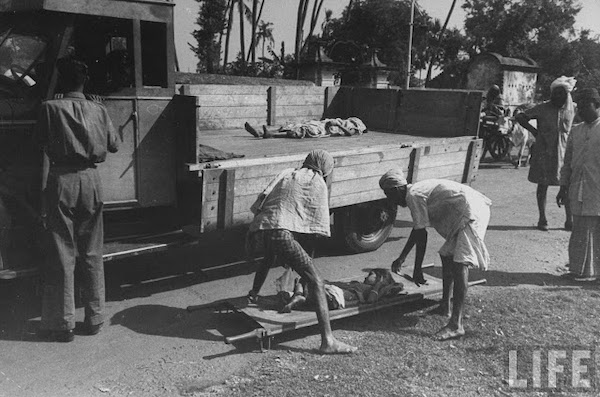 Eminent Indian economist Professor Utsa Patnaik (Jawaharlal Nehru University) has estimated that Britain robbed India of $45 trillion between 1765 and 1938, however it is estimated that if India had remained free with 24% of world GDP as in 1700 then its cumulative GDP would have been $232 trillion greater (1700-2003) and $44 trillion greater (1700-1950). Deprivation kills and it is estimated that 1.8 billion Indians died avoidably from egregious deprivation under the British (1757-1947). The deadly impact of British occupation of India lingers today 71 years after Independence, with 4 million people dying avoidably from deprivation each year in capitalist India as compared to zero (0) in China.

Professor Utsa Patnaik is professor emeritus at Jawaharlal Nehru University, New Delhi. Utsa Patnaik is a Marxist economist and taught at the Centre for Economic Studies and Planning in the School of Social Sciences at Jawaharlal Nehru University (JNU) from 1973 until her retirement in 2010. She obtained her PhD in economics from Oxford University, UK, and has researched the transition from agricultural  peasant societies to industrial societies, and food security and poverty, especially in India.(1) Utsa Patnaik’s  latest book, co-authored with Prabhat Patnaik, is “A Theory of Imperialism” (2016).(2)

We all know that the British rapaciously exploited India. Professor Utsa Patnaik has estimated the magnitude of the British robbing of India thus:

(A) How and by how much did Britain rob India?

After the betrayal and defeat of the Nawab of Bengal, Siraj ud-daulah, at the Battle of Plassey in 1757, the British installed their own puppet, Mir Jafar, as Nawab. The British extracted huge concessions from the defeated Bengalis including land, a monopoly of trade with Europe, and exemption from taxation on internal trade. The British subsequently replaced Mir Jafar with Mir Kasim as Nawab of Bengal. The Bengalis under Mir Kasim were finally driven to revolt when he was in turn sacked by the British and replaced by Mir Jafar for a second term. The Bengalis were defeated at the Battle of Buxar in 1764, and in 1765 the Moghul Emperor Shah Alam was “persuaded” to grant the power of taxation (diwani) in Bengal to the British East India Company. The British in turn sub-contracted rapacious revenue collection to Bengalis.

Some of the revenue would go the Emperor and some to the Nawab, with the remainder being retained by the British. The British described this as “farming” the Bengali peasants (ryots), but over-taxing of Bengalis meant that  10 million Bengalis perished in the Great Bengal Famine of 1769-1770. The East India Company used about one third of the collected revenue to buy Indian goods and thus the Bengalis were in effect being paid for their goods through the exorbitant taxes applied to them. 15 years later, exorbitant British taxation led to famine in the Gangetic plain to the west of Bengal. Indeed such British excesses led to the British Parliament (unsuccessfully) impeaching Warren Hastings (first Governor General of India and father by adultery of Jane Austen’s cousin Eliza) for crimes such as the violation of the Begums of Oudh–he was of course eventually acquitted.(6)

By the 1840s the East India Company had dominion over most of present-day India, Pakistan and Bangladesh but the British Government was increasingly keen for greater  involvement in the exploitative proceedings. In 1847 the  British Government introduced a scheme whereby those wishing to buy Indian goods could only do so using Council Bills issued by the British  Crown in London. Traders would pay for such Bills in gold and silver and use them to pay Indian producers who would in turn cash them in for rupees at the local colonial office–rupees that been exacted by exorbitant taxation.(5)

In his book “Inglorious Empire. What the British did to India”, Shashi Tharoor describes how the British looted and de-industrialized India and thus paid for Britain’s Industrial Revolution and violent global dominance: “At the beginning of the eighteenth century, as the British economic historian Angus Maddison has demonstrated, India’s share of the world economy was 23 per cent, as large as all of Europe put together. (It had been 27 per cent in 1700, when the Mughal Emperor Aurangzeb’s treasury raked in £100 million in tax revenues alone.) By the time the British departed India, it had dropped to just over 3 per cent. The reason was simple: India was governed for the benefit of Britain. Britain’s rise for 200 years was financed by its depredations in India” ((7), page 3 (8)). This deadly and merciless taxation was accompanied by massive de-industrialization of India. Thus before the invasion by the British, India led the world in textiles, agriculture and metallurgy, but rapidly became an exporter of raw materials and an importer of goods manufactured in Britain.(6)–(8)

Thus the cumulative GDP (PPP) for India is given below for 6 periods since 1700 (A) at the observed average % of world GDP, and (B) if the average Indian % of world GDP had remained at the pre-British invasion 24.0% in 1770.

It has taken India 7 decades to partially recover from 2 centuries of rapacious British imperialism. The difference in cumulative GDP is $316.4 trillion (1700-2003) and $44 trillion (1700-1950), the latter estimate of India’s deprivation being consonant with Professor Utsa Patnaik’s estimate that the British had  stolen $45 trillion from India between 1765 and 1938.(3)–(5)

(B) 1.8 billion Indians died avoidably from egregious deprivation under the British.

Imposed poverty kills. Poverty-derived  avoidable mortality (avoidable death, excess mortality, excess death, premature death, untimely death, death that should not have happened) can be estimated as the difference between the actual deaths in a country and the deaths expected for a peaceful, decently governed country with same demographics (birth rate and percentage of children).(12) Below are listed in rough  chronological order some shocking salient features of the deadly impact of rapacious British imperialism over 2 centuries in British India, Britain’s Auschwitz.

The capitalist perpetrator deception continues in a neoliberal One Percenter-dominated world that is existentially threatened by nuclear weapons (a nuclear winter from nuclear war would wipe out most of Humanity and the Biosphere), poverty (15 million people die avoidably from deprivation each year, 4 million in India) and man-made climate change (about 1 million people die from climate change each year but this set to increase to an average of 100 million deaths per year this century if urgent, requisite action is not taken).(30), (32)  Poverty kills. History ignored yields history repeated.(6) Peace is the only way but silence kills and silence is complicity. Please inform everyone you can.