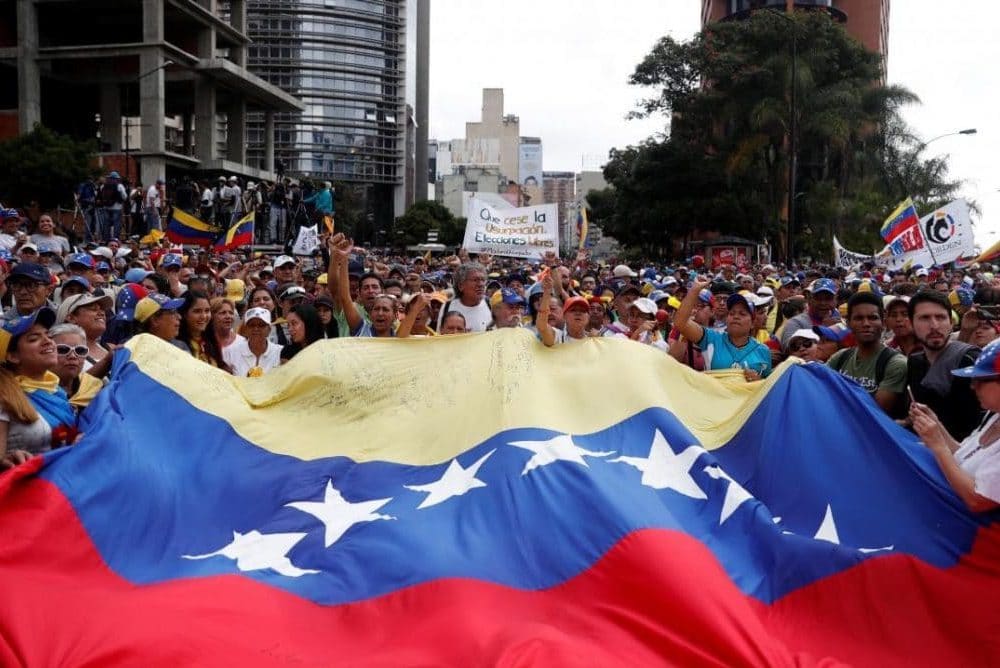 Opposition supporters take part in a rally against Venezuelan President Nicolas Maduro’s government and to commemorate the 61st anniversary of the end of the dictatorship of Marcos Perez Jimenez in Caracas, Venezuela January 23, 2019. REUTERS/Carlos Garcia Rawlins.

In a move that many of us saw coming, the US has backed efforts to force Nicolas Maduro from the Presidency of Venezuela. Earlier today Donald Trump officially recognised Juan Guaido, the leader of Venezuela’s defunct National Assembly as “interim President”.

This move was backed by Canada, Brazil, Argentina, Costa Rica, Ecuador, Chile and Peru. The EU were also quick to back regime change, although leaders of specific EU states are yet to make their positions know. It is doubtful any of us will be surprised when they do.

The noteworthy—and predictable—rebels on American continent were the leftist governments of Mexico and Bolivia.

This move has been on the cards for a while, with John Bolton—Trump’s National Security Advisor—tweeting this just last week:

The National Assembly is the only legitimate, democratically elected government entity in Venezuela, and the U.S. supports its important decisions yesterday. We urge all Venezuelan leaders, including the military, to uphold the rule of law and constitutional order.

This is very clearly a call for open revolution—note the language: “including the military”.

Obviously any coup needs the military backing it to be successful. Though there are reports of large protests on the streets of Caracas—both for and against the President—the military have not got involved on the ground so far. Howver, they did release a statement disavowing Guaido and the “dark interests” supporting him. They went on to declare that they stand by President Maduro in support of Venezuela’s national sovereignty.

Lacking, for now, the support of Venezuela’s own military the only way the coup can succeed is with military help from a foreign power, the obvious candidates being the US, NATO and Brazil’s new President Jair Bolsonaro—a cross between Pinochet and a used car salesman. He has previously said he would back a military invasion of Venezuela.

What the US/NATO/whoever need is a pretext to invade—enter The Guardian et al.

In their story covering the on-going crisis (Venezuela: what happens now after two men have claimed to be president?) The Guardian quotes Eric Farnsworth, a former US diplomat and vice-president of the Council of the Americas, who says:

If that happened, the US and the international community would be forced to react.

Which is their way of saying if anyone gets shot, or even injured, in these protests then the US (and allies?) will move to intervene militarily. They would be “forced” to, apparently.

Expect this angle to replayed, a lot, all throughout the mainstream media in the coming days. Op-eds will remind us of the “cost of inaction” in Syria. Some people will write that though Trump is a monster, he is at least elected and we should stand with him in defense of democracy. Stuff like that.

The bottom line will be—we NEED to act in Venezuela because Maduro is “massacring” his own people to hold onto power.

They’ve tipped their hand with a reference to “sharpshooters” killing civilians.

This is, of course, the exact scenario we saw play out in Ukraine in 2014. “Sharpshooters” were “turned loose” on the crowd, killing several dozen people (police and protestors alike). This violence was used to declare Victor Yanukovych’s government “illegitimate”, and replace him with a leader more to the US’s liking. Evidence has since emerged showing the shots were likely fired by non-government marksmen in a bid to escalate the violence.

The same fate awaits Venezuela and Maduro—except Venezuela doesn’t have a super-power on its borders, so the US won’t have to keep the gloves on this time. Venezuela could feel the full force of America’s “humanitarian” armed forces. There are people on the streets—all it needs is one tiny spark, one slight act of violence, and the whole situation will explode.

The US Deep State has shown before that they are more than able to create a spark when they need one.

Kit Knightly is co-editor of OffGuardian. The Guardian banned him from commenting. Twice. He used to write for fun, but now he’s forced to out of a near-permanent sense of outrage.