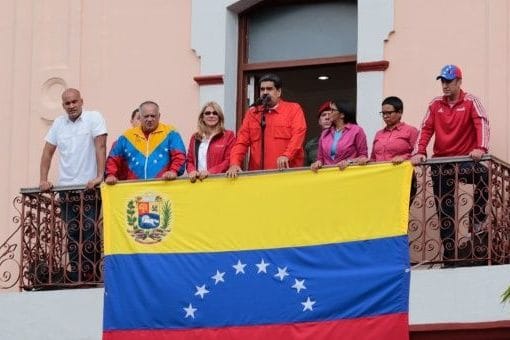 President Nicolas Maduro announced that he was cutting all diplomatic relations with the United States after U.S. President Donald Trump recognized lawmaker Juan Gauido as interim president, after the opposition lawmaker illegally self-appointed himself as president of the country, breaking the constitution.

“They went too far. I have decided to break all diplomatic and political relations with the imperialist government of the United States. Out! They can all leave,” Maduro said as he gave a speech from the presidential palace in Caracas. “They aim to rule Venezuela from Washington.”

President Nicolas Maduro gave a 72-hour deadline to the U.S. representatives in Venezuela to leave the South American sovereign nation, after their President Donald Trump, backed the coup d’etat attempt led by Guaido.

"The right-wing has no shame when they violate the Venezuelan Constitution that was approved by our people." @dcabellor pic.twitter.com/0p2nnGqbHy

The governments of Mexico, Bolivia, Turkey and Rusia have stated that they recognize Bolivarian President Nicolas Maduro Moros as the constitutional and democratically elected president of Venezuela.

“Don’t trust the gringo empire. That’s what drives their interest – the desire for Venezuelan oil, gas, and gold. These do not belong to you, they belong to the sovereign people of Venezuela,” warned President Maduro to the Venezuelan people.

The left-wing parties in Chile have heavily criticized the decision taken by President Sebastian Piñeara of recognizing the illegally self-appointed “president” Juan Guaido. According to Jaime Naranjo, a lawmaker for the Socialist Party of Chile, the decision of Piñera is like trying to “put out a fire with gas.”

President #NicolasMaduro announced that he was cutting all diplomatic relations with the United States after U.S. President #DonaldTrump recognized lawmaker #JuanGauido as interim president. pic.twitter.com/WR2mzhfjP7

“It seems to me that it is an absolute and absurd diplomatic imprudence. You can not recognize a government when it has in our own country, recognizing another government with an installed ambassador (…) The decision taken by the (Chilean) Government does not help the Venezuelan democratic process at all,” stated Naranjo.

“US Vice President openly calls for regime change in #Venezuela. So-called “rules-based order” promoted by West is nothing more than “fig leaf” of meddling in other country’s affairs. Striking similarities with 2014 Western-backed “maidan” coup in #Ukraine,” stated the Russian embassy in Canada on their official Twitter account.

According to Alberto Garzon, coordinator of the United Left and militant of the Communist Party of Spain “There has just been a coup in Venezuela by the Venezuelan right-wing under the protection of the U.S. government. A regrettable classic.” According to him, this has been gestating for several years, and it has not been the first coup backed by the U.S.

He hopes that this coup will also be a failure, “so that peace and dialogue are preserved and external interference led by Donald Trump is rejected.” As Guaido has been self-proclaimed as president and was backed almost immediately by the U.S. government “that is backing the coup d’etat.” He also states that this coup, in Spain, is being backed by the far-right, to which Garzon asks: “Isn’t this representative? of what is happening in Venezuela?