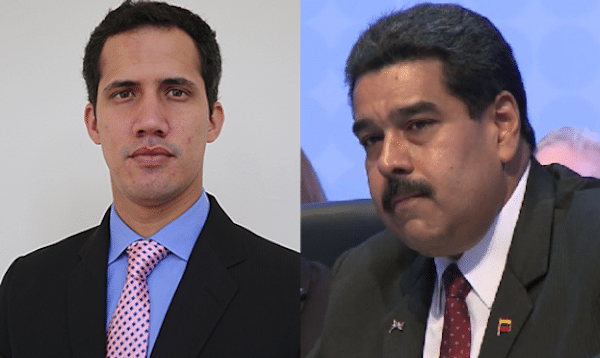 The Trump administration’s January 23 recognition of Venezuela’s National Assembly leader, Juan Guaidó, as the president of Venezuela, in opposition to the “de facto” and “de jure” president of Venezuela, Nicolas Maduro, threatens an avalanche of nations recognizing leaders of various political factions in countries around the world as legitimate governments. In reaction to Trump’s move, Maduro severed diplomatic relations with Washington and ordered all U.S. embassy personnel in Caracas to leave the country within 72-hours. Venezuela’s opposition-controlled National Assembly declared a caretaker government as a rival to the Maduro government with Guaidó as the interim president.

Maduro was recently sworn in for a second term as Venezuela’s president, an action that has been rejected by the U.S.-financed Venezuelan right-wing opposition. U.S. Vice President Mike Pence declared “the United States’ resolute support for the National Assembly of Venezuela as the only legitimate democratic body in the country.” Luis Almagro, the secretary general of the Washington-based Organization of American States (OAS), previously referred to Guaidó as Venezuela’s “interim president.” OAS members Canada, Colombia, Brazil, Peru, and Argentina stand ready to recognize Guaidó as president of a rival Venezuelan government. Mexico has rejected the anti-Maduro stance of the “Lima Group,” a right-wing bloc of Latin American states demanding Maduro’s ouster.

We may soon see a situation where the governments of the United States, Canada, Argentina, Brazil, and other countries declare Venezuelan diplomatic personnel accredited by the Maduro government expelled and their embassies turned over to loyalists of the Guaidó government. With the severance of Venezuelan relations with the United States, the Trump administration may turn over the keys of the Venezuelan embassy in Washington to the Guaidó-led opposition.

A similar situation has already been experienced by Syria. In 2013, the Syrian opposition established a rival “interim government” based in Azaz, Syria, that was in opposition to the “de facto” and “de jure” government of President Bashar al-Assad in Damascus. The “interim government” was backed by Turkey, the United States, Saudi Arabia, and others, but it has all-but-dissolved following Assad’s overall victory in the Syrian civil war. Assad’s government retained the support of Russia, Iran, Iraq, China, North Korea, and Venezuela.

What portends for Venezuela is a situation that will rapidly be copied by other countries that will rush to recognize rival presidents and governments, perhaps even extending support to the establishment of government-in-exile. Such situations will only add to the destabilization of international relations that already permeates the globe.

There are several diplomatic “dominos” that are following the example of Venezuela. The most pressing situation is in the Democratic Republic of Congo, where opposition leader Félix Tshisekedi was declared the winner of the nation’s contentious presidential election, receiving 38.57 percent of the vote. Tshisekedi is due to replace outgoing president Joseph Kabila. However, supporters of another presidential candidate, Martin Fayulu, have called the former ExxonMobil executive the actual winner of the DRC election. Fayulu won 34.8 percent of the vote. Emmanuel Ramazani Shadary, a third candidate, who was backed by Kabila, decisively lost, receiving 23.8 percent of the vote.

Already, thanks to the American example being set in Venezuela, various countries are lining up to support either Tshisekedi or Fayulu as the leaders of rival DRC governments. The DRC has a tortured history of rival governments, starting from its independence in 1960. After Prime Minister Patrice Lumumba was deposed in a Central Intelligence Agency-led coup in 1960, leftist leader and Lumumba deputy prime minister Antoine Gizenga established the Free State of the Congo in Stanleyville (now Kisangani) as a rival to the Republic of the Congo in Leopoldville (now Kinshasa). Gizenga’s government was recognized by the Soviet Union, China, Mongolia, Poland, East Germany, Yugoslavia, Albania, Bulgaria, Hungary, Czechoslovakia, Cuba, Iraq, the United Arab Republic, Ghana, Guinea, the Algerian provisional government, and Morocco. The Leopoldville government continued to be recognized by the United States, United Kingdom, France, Belgium, and other Western countries.

A secessionist State of Katanga, led by Moise Tshombe and supported by Belgian mercenaries, was established in Elisabethville (now Lubumbashi). At the same time as the Katangan secession, the State of South Kasai was proclaimed in Bakwanga, with Albert Kalonji as president. Although no nation extended diplomatic relations to either Katanga or South Kasai, they received military support from France, Belgium, South Africa, and the Central African Federation (also known as the Federation of Rhodesia and Nyasaland).

In a case of déjà vu, the Tshisekedi presidency is supported by South Africa, Zimbabwe, Nigeria, Algeria, Russia, and China, while Fayulu has the backing of France, Belgium, United Kingdom, the United States, and the Vatican. Zambia, whose president originally backed Fayulu and called for a recount, changed its position to support Tshisekedi. The DRC seemed to have slipped into a time machine, ending up in 1960, with some of the same foreign actors lining up on the same sides in support of rival Congolese leaders.

In Yemen, there are rival governments backed by rival countries. Two leaders claim to be the leaders of the Republic of Yemen. One is led by interim president Abd Rabbuh Mansur Hadi, who largely rules from exile in Saudi Arabia. The other, which has occupied the Yemeni capital of Sana’a, is led by Mohammed Ali al-Houthi, the President of the Revolutionary Committee of Yemen. Saudi Arabia and the Gulf Cooperation Council nations of Kuwait, Bahrain, Qatar, United Arab Emirates, Bahrain, and Oman, as well as the United States, Egypt, and Pakistan, recognize Hadi’s government as the legitimate government of Yemen. Iran, Syria, and Lebanese Hezbollah recognize al-Houthi as the legitimate government of Yemen. Supporters of the former independent South Yemen took control of Aden in January 2018 and established the Southern Transitional Council, which, although not enjoying any diplomatic recognition, enjoys the support of the United Arab Emirates.

The Trump administration, which appears to thrive on chaos and instability at home and abroad, has given a jump start to other rival governments. Washington is encouraging nationalist sentiments, both Chinese and Taiwanese, on Taiwan. The “Republic of China” on Taiwan claims to be the government of China. However, the People’s Republic of China considers Taiwan to be a renegade province. China and Taiwan have vied for diplomatic advantage by engaging in “checkbook diplomacy.” China has been successful in weaning away nations recognizing Taiwan by offering them substantial aid packages in return for establishing relations with Beijing and severing them with Taiwan.

Extending diplomatic relations to rival governments, including those in exile, rarely succeed. After the fall of the Spanish Republic in 1939 to the fascist forces of Generalissimo Francisco Franco, the Spanish Republic established a government-in-exile, first in France, and then in Mexico. During its exiled existence, the Spanish Republic was only recognized by Mexico, Panama, Guatemala, Venezuela, Poland, Czechoslovakia, Hungary, Yugoslavia, Romania, and Albania.

What Trump has unleashed with his actions directed toward Venezuela is a situation where competing governments will be fighting over seats in the United Nations, embassies and consulates abroad, and the right to speak on behalf of their countries in international forums. It is the sort of bedlam upon which Trump, a proud destroyer of institutions, thrives.

It is increasingly being said that Trump’s White House consists of a team of “morons” and “idiots.” When it comes to the White House recognizing Venezuela’s right-wing opposition as the government of Venezuela, those appellations for Trump and his administration have definite merit.

Wayne Madsen is an investigative journalist, author, and syndicated columnist. He is a member of the Society of Professional Journalists (SPJ) and the National Press Club.