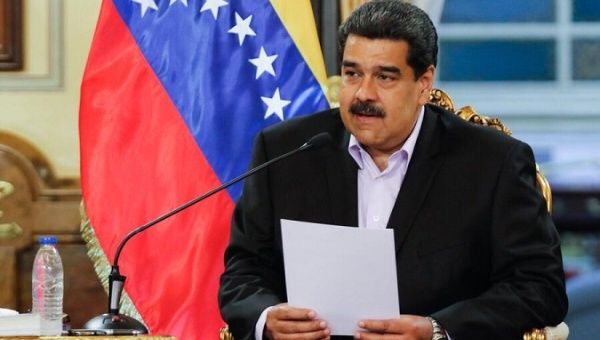 Venezuelan President Nicolas Maduro called the U.S. decision to sanction US$7 billion in assets from the country’s oil sector a robbery. | Photo- Presidencia

Washington’s new round of sanctions against Venezuela’s state-owned oil company, PDVSA announced in a press briefing Monday triggered a response from Maduro later that evening during a televised speech aired from Caracas.

The Bolivarian president said, “I can say that Washington’s response in the first place was always the same (…) financial diplomatic persecutions and rejection.

“Last Saturday we reached an agreement with the Government of Donald Trump, in an exchange of official and diplomatic documents, establishing a negotiation to leave open our offices of interests,” he said.

However, during a meeting with the press in Washington, U.S. National Security Adviser John Bolton announced a new set of sanctions which will block US$7 billion in assets from the Venezuelan oil sector.

General licenses authorizing select transactions and activities with the Venezuelan oil company will also be permitted to continue for a limited time. European and Caribbean companies will also receive licenses to discourage business with the Bolivarian oil industry.

During the televised address, President Maduro said, “The U.S. today decided to go the illegal way by stealing the company Citgo from Venezuela.

“Since I assumed to this day the message to the United States has always been one: dialogue, respect, non-interventionism towards Venezuela and the response from Washington was always the same: contempt, underestimation and aggression,” Maduro said, denouncing the sanctions as a “robbery” and revealing his plans to take legal action against the U.S.

Since last week’s unexpected attempted coup, world politics have become divided with countries aligning themselves behind U.S. President Trump and his destructive sanctions or the legitimately elected President Nicolas Maduro.

However, the president told the crowds that he was willing to reinitiate negotiations with the opposition leaders to resolve the issues and bring about peace in the nation.

“I am ready once more to start a round of talks, dialogue, negotiations with all the Venezuelan opposition, with only one objective: peace, understanding, mutual recognition,” he said.