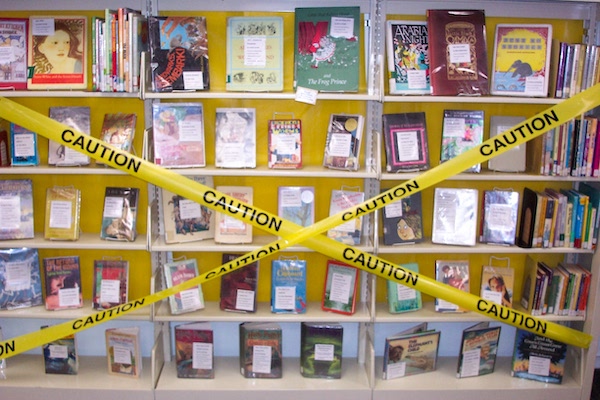 Attorney General Muhammad Prasetyo is proposing that massive raids be carried out to hunt down books which contain communist teachings and banned ideologies. The proposal was made after the seizure of hundreds of books around the country allegedly containing “banned ideas”. — Taufiq Siddiq, Jakarta

“I’m proposing that if possible, yes massive raids be carried out”, said Prasetyo at the House of Representatives (DPR) building in South Jakarta on Wednesday December 23.

The proposal for the raids, said Prasetyo, is because it is suspected that books containing banned ideas have also been found at bookshop in other parts of the country.

“Because bookshop owners are saying that that the books are not just [being sold] here, but in other places, close attention needs to be paid to this”, he said.

Earlier the TNI (Indonesian military) carried out book raids in several parts of the country including Kediri, Padang in West Sumatra and Tarakan in North Kalimantan. Several of the books seized by the soldiers allegedly contained communist ideas.

Prasetyo was reluctant to comment on whether or not there was an instruction from the Attorney General’s Office (AGO) to conduct the earlier book seizures. According to Prasetyo, the raids started after books were discovered in Kediri which allegedly contained banned ideas.

Prasetyo said that the AGO is still studying the context of the seized books. “It’s in process, yes, later we will form a clearing house to examine the content. We want to express our thanks to the parties which first discovered the books which are suspected of containing banned teachings”, he said.

One of the groups protesting the book raids by the TNI is the Institute for Public Research and Advocacy (ELSAM).

“These actions go against the principles of protecting freedom of expression and information, and aside from this they are not in accordance with the principles of due process of law”, said ELSAM Executive Director Wahyu Wagiman not long ago.

Wagiman said that the sweeps and bannings by the joint TNI team were based on Provisional People’s Consultative Assembly Decree (TAP MPRS) Number XXV/MPRS/1966 and Law Number 27/1999 which prohibit the dissemination of Marxist, Leninist and communist teachings.

This is despite the fact that on constitutional terms it can be said that this legislation is no longer in accordance with Article 28F of the 1945 Constitution (UUD 1945), which states that all persons have the right to communicate, obtain and disseminate information using any and all types of media available.

According to Wagiman, the Constitutional Court itself in decision Number 6-13-20/PUU-VIII/2010 in a review of Law Number 4 PNPS/1963 on Prohibitions on Printed Materials, expressed the view that the banning and seizure of books by the AGO without a court order is a violation of the constitution (rule of law).

These actions, said Wagiman, are the same as arbitrarily taking over people’s personal rights which is prohibited under Article 28H Paragraph (4) of the UUD 1945 on protecting individual rights.

In 2010 the Constitutional Court annulled the 1963 law on monitoring printed materials with content that could jeopardise public order and stripped the AGO of its powers to monitor and ban books arbitrarily which it deemed could “disrupt public order”.

Gibran Maulana Ibrahim, Jakarta — Attorney General Muhammad Prasetyo has spoken out about hundreds of books on communism that were seized last year in Kediri, East Java. According to Prasetyo, more raids need to be carried out if indeed these books contain communist teachings.

“Raids are perhaps needed if indeed the books clearly have content on communism and the PKI [the banned Indonesian Communist Party] and they should be seized wherever the books are stored or kept”, said Prasetyo during a meeting with the House of Representatives (DPR) Commission III at the parliamentary complex in Senayan, Jakarta, on Wednesday January 23.

Prasetyo said the TNI (Indonesian military) has already handed over the books that smack of communism which it seized in Kediri to the Attorney General’s Office (AGO). The confiscated books will be studied by a clearing house team.

“The TNI has handed them over to the AGO and the AGO will take them to a clearing house. We will conduct a comprehensive and thorough study and examination of the contents of the books”, he said.

“The alibi being given by the bookshops is that the books are already circulating all over the place, why is it that only my books are being seized. That’s what they’ve been saying and we will study and look into this”, said Prasetyo.

As has been reported, on Tuesday December 25 last year around 160 books of various titles which allegedly contained communist ideas were seized from a number of bookshops in Pare, Kediri regency.

According to government officials, the bookshops are owned by a resident of the East Java provincial capital of Surabaya who is currently in Jambi, Central Java.