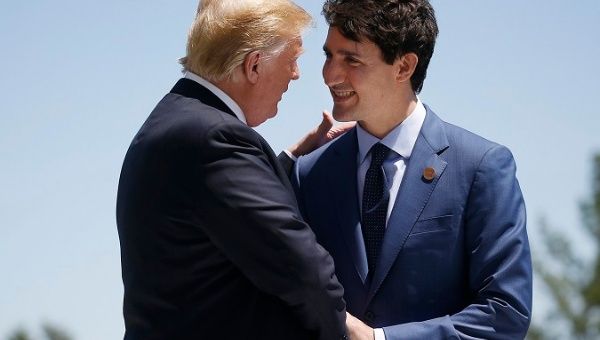 The CLC vehemently rejects a militarized solution to this crisis; the people of Latin America have not forgotten the brutal history of military rule in the region.

Canada is among several countries, including the U.S. and Brazil, that endorsed opposition lawmaker Juan Guaido as “interim President” of Venezuela, after he self-proclaimed himself as such on Jan. 23 in violation of the Venezuelan constitution.

“The CLC is alarmed at the escalation of international interference in the democratic process of a sovereign nation, including the possibility of military intervention,” the press release by the massive worker organization warned. “The CLC vehemently rejects a militarized solution to this crisis; the people of Latin America have not forgotten the brutal history of military rule in the region.”

The statement went on to urge the Canadian government not to promote or support regime change policy that is being sought by the government of the United States and its allies adding that “Canada’s role on the world stage is better suited to promote stability through constructive dialogue with the international community.”

The United States and its right-wing allies recognized opposition lawmaker Juan Guaido as the country’s “interim president” after he self-proclaimed himself as such on Jan. 23, an illegal and unconstitutional move and a rejection of the second term of the Nicolas Maduro in office which he won after last year’s May elections.

Guaido, the United States and right-wing governments in the region have been calling on the Venezuelan military to oust Maduro. However, the country’s defense minister and top military brass have come out in support of Maduro and his government.

There have been whispers in Washington that the Donald Trump administration is “seriously considering” a military intervention in Venezuela if Maduro does not step down or be ousted internally.

Since the beginning of the recent political crisis, president Maduro has repeatedly said he was open to dialogue with the opposition and its leader Guiado in order to seek a peaceful resolution to the current situation.