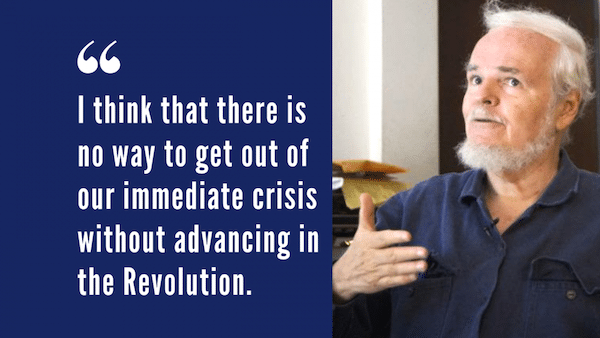 Luis Britto Garcia is perhaps Venezuela’s most highly regarded public intellectual. A firm supporter of the Bolivarian Process, he has written numerous plays, novels, historical investigations and film scripts and is also an incisive commentator on politics in the region.

Many people on the left are critical of President Nicolás Maduro’s government, but that criticism has nothing to do with a desire to join the ranks of the right-wing opposition or its foreign allies. In the face of the current imperialist attack on Venezuela, we need to defend the country and stand up against interference. Do you agree?

I have repeatedly claimed that, when both internal and external forces of reaction make a double attack on our country–and use all legal and even illegal resources they have at hand–we must all come together in Venezuela’s defense and in the defense its authorities and the political coalition that maintains them legally in power.

There may be differences and internal debates, but we can’t hesitate when faced with these alternatives: it’s either Washington or Venezuela, invasion or sovereignty, savage capitalism or socialism.

You have written about Simon Bolivar and have pointed out how his example remains relevant today. What would Bolivar do in our time? As Bolivarians, what should we do in the present?

That’s right. I did a meticulous examination of both Bolivar’s ideas and his actions in relation to society and the economy in my book The Thought of the Liberator: Economy and Society [2010], and in numerous articles and other works. If Bolivar were here among us today, he would do the same as he did when he was alive: first of all, he would make every effort to defend (with arms if necessary) Venezuela’s sovereignty: the right of his people to choose its own government.

He would the attempt to organize and unite Latin American and Caribbean peoples against imperialist domination. Also, in the economic sphere, Bolivar did not hesitate to carry out the largest confiscations of goods in Venezuelan history. He siezed all the royalists’ property, in the form of either land or other goods, and distributed it among patriotic soldiers, in accordance with the services they had rendered (though it could also be used collectively).

Bolivar said that the nation has property rights to its underground minerals, which is a principle that still holds today and must be defended at all costs. In 1814, long before his trip to Haiti, Bolivar began to eradicate slavery. He also fought against racial discrimination, with his ”Angostura Speech” [2010] proclaiming that in contemporary Venezuela “nobody should be mistreated for the color of his skin.” If we say that the slave is someone who just ekes out an existence–making just enough to survive–then Bolivar’s struggle today would be to overcome both extreme and relative poverty.

To carry out these measures, Bolivar did not hesitate to take radical and extreme steps (nor should a Bolivarian hesitate to do so today). Let us remember his declaring a “War to the Death.” Bolivar today would continue with the project of Latin American and Caribbean integration, as he did with his Amphictyonic Congress in Panama, where the United States only got to participate thanks to Francisco de Paula Santander’s influence. Anyone who calls himself a Bolivarian today must follow and if possible extend the practice and thought of Bolivar. If we don’t do so, we’ll become a colony again.

How do you evaluate the global response to the imperialist onslaught we are experiencing these days? Can we see ruptures in the United States’ hegemony and evidence of a new, multipolar world?

For me, there is an evident break in the U.S.’s hegemony. The United States has moved its industries abroad to take advantage of cheap sweatshop labor. In so doing, it has deindustrialized the country and plunged its own workers into misery. China is today the world’s leading economic power; Russia has reemerged as a great power after the decline that came with the Soviet Union’s dissolution. Europe is trying to become independent, despite being occupied since the mid-century by a network of NATO bases. The Middle East eludes U.S. control; after decades of interference, the U.S. has only managed to make chaos.

I have pointed out that, historically, revolutions have always emerged in the fissures created by the clash of the hegemonic powers at the time. The United States emerged taking advantage of the struggle between England, France and Spain. The Soviet Union took advantage of the clash of European powers during the First World War. The same goes for the People’s Republic of China, which benefited from the fighting of the Second World War. Later, Cuba used the confrontation between the United States and the Soviet Union. Today, the hegemonic struggle between the United States, Russia and China offers us an opportunity to consolidate Venezuelan sovereignty.

After dealing with this imperialist attack and coup d’etat attempt, which is our most immediate problem, what should the Maduro government do in the medium and long run?

I think that there is no way to get out of our immediate crisis without advancing in the Revolution, and that is also the key to going forward once we have recovered. That’s to say, we can only face down imperialism after we have dominated the local oligopoly formed by a dozen companies that monopolize the import and distribution of basic goods [in our country]. And we have to subjugate the handful of actors that run the oil smuggling business and are involved in paramilitary infiltration.

We will be able to face external threats once we have cleaned up the internal theatre with a control of the whole administration–at all stages of its operation–and have installed an integral computerized control in real time of prices and costs of economic operations. We must sanction the many acts of corruption and clean up the companies and institutions where this kind of activity is rife. With these measures, popular support for the socialist project will become unbreakable. On the other hand, if such measures are not taken, it’s to be feared that the economic war will erode this support, which maintains itself now only through great sacrifices.