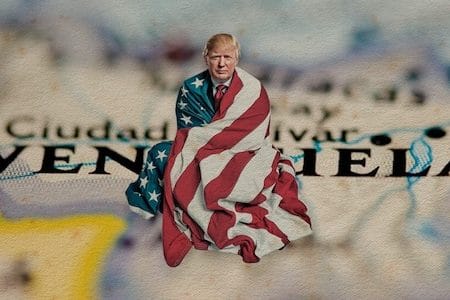 The international financial blockade imposed by the United States against Venezuela has caused the South American country to lose 350,000 million dollars in production of goods and services between 2013 and 2017, according to the research carried out by the Economic Debates Unit of the Latin American Geopolitics Strategic Center (CELAG).

The study emphasizes that these financial blockades aim to strangle the economy of a country, ending in a few years with its productivity, a fact that constitutes the prelude to a military intervention.

In the case of Venezuela, the researchers point out that the blockade has been based on the expulsion of the country from the international financial markets, preventing it from resorting to the credit market both to renew maturities and to make new loans.

The South American country integrated into the world as an oil supplier, the productive specialization led to a high dependence on imports that are financed with oil revenues, which is why the financial and commercial boycott to Venezuela has more serious consequences than in the diversified economies.

Despite Venezuela’s punctual payments of external debt, agencies such as Standards & Poor’s or Moody’s put the country risk above 2,000 points since 2015, with peaks of up to 5,000 and even 6,000 points recently.

The reasons given by these rating agencies when evaluating countries are opaque but the tendency is to give a high score to those who favor free market policies and punish the contrary. This is how the Venezuelan debt, in spite of being paid continuously, was rated as having a high probability of default with a worse rating than that of countries at war like Syria.

In summary, if we add the annual average value of foreign currency that did not enter due to the blockade (19.2 billion), plus what the country had to pay for each year average corresponding to the external debt (3.3 billion), we can conclude that the the economy and society suffered an international asphyxiation of 22,500 million dollars per year resulting from a deliberate international strategy of financial isolation.

This financial pressure intensified since 2015 with the fall in the price of crude oil.

All the scenarios proposed by the CELAG study shows that the economy would have performed better each year if it had disposed of those 22,000 million dollars a year.

On the other hand, the loss of this amount explains the economic deterioration by 60%. As a result of the blockade, the losses in the production of goods and services ranged between 350,000 million and 260,000 million in the period 2013-2017, which is between 12,200 and 13,400 dollars for each Venezuelan. During that quinquennium, the country lost between 1.6 and 1.1 Gross Domestic Products.

A country as dependent on imports as Venezuela can not activate its productive apparatus without foreign currency. The strangulation of foreign financing has meant a massive bombardment of its factories and industries. If the government of President Nicolás Maduro had had an international financing such as that available to Mauricio Macri during his first three years in office, the growth of Venezuelan GDP would be higher than that of Argentina.