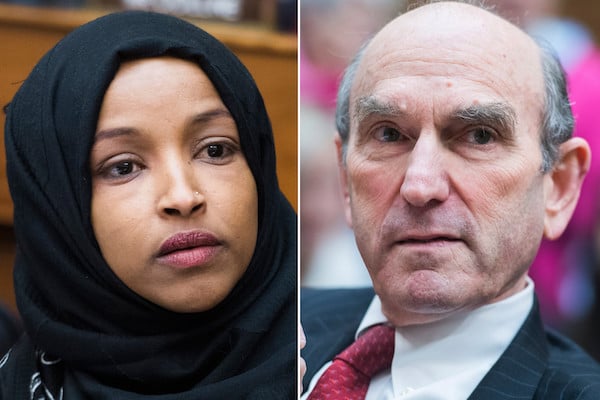 Rep. Ilhan Omar clashed with newly minted Venezuela Envoy Elliott Abrams during a Wednesday hearing in front of the House Foreign Relations Committee discussing the role of the U.S. military in Central America.

“Mr. Abrams, in 1991 you pleaded guilty to two counts of withholding information from Congress regarding your involvement in the Iran-Contra affair, for which you were later pardoned by President George H.W. Bush,” began Omar.

“I fail to understand why members of this committee or the American people should find any testimony that you give today to be truthful.”

“If I could respond to that…” interjected Abrams.

“It was not a question,” shot back Omar.

After a brief exchange in which Abrams protested “It was not right!” Omar cut Abrams off, saying “Thank you for your participation.”

.@IlhanMN on Elliott Abrams' role in Iran-Contra: "I fail to understand why members of this committee or the American people should find any testimony that you give today to be truthful."

Omar: "That was not a question. Thank you for your participation." pic.twitter.com/QBagSpOQXs

Omar: “On February 8, 1982, you testified before the Senate foreign relations committee about U.S. policy in El Salvador. In that hearing you dismissed as communist propaganda, a report about the massacre of El Mozote in which more than 800 civilians–including children as young as two-years-old–were brutally murdered by US-trained troops. During that massacre, some of those troops bragged about raping 12-year-old girls before they killed them. You later said that the U.S. policy in El Salvador was a “fabulous achievement.”

Abrams replied: “From, the day that Duarte was elected in a free election, to this day, El Salvador has been a democracy. That’s a fabulous achievement.”

Omar shot back: “Yes or no, do you think that massacre was a fabulous achievement that happened under our watch?”

Abrams protested: “That is a ridiculous question—

to which Omar shot back, “Yes or no,” cutting him off.

“No!” exclaimed Abrams, who added, “I am not going to respond to that kind of personal attack–which is not a question.”

Omar pushed back: “Yes or no, would you support an armed faction within Venezuela that engages in war crimes, crimes against humanity or genocide if you believe they were serving U.S. interests as you did in Guatemala, El Salvador, and Nicaragua?”

“I am not going to respond to that question, I’m sorry. I don’t think this entire line of questioning is meant to be real questions, and so I will not reply,” said Abrams.

As Joseph Duggan of American Greatness noted two weeks ago;

Abrams is the pre-eminent prophet and practitioner of hyper-interventionist approaches to destabilize or overthrow governments–of foes and friends alike–that do not pass his democracy-is-the-end-all-and-be-all litmus test. His closest friends and associates, from whom his political positions are indistinguishable, include some of President Trump’s most rabid enemies, false-flag “conservatives” Bill Kristol and Max Boot.

Abrams, who had served in the Reagan State Department, faced multiple felony charges for lying to Congress and defying U.S. law in his role as a mastermind of the Iran-Contra debacle.Abrams’ dishonesty almost destroyed Ronald Reagan’s presidency and put Reagan in jeopardy of impeachment. Abrams was allowed to plead guilty to two reduced charges and later was pardoned by George H.W. Bush, who feared impeachment because of his own role in Iran-Contra.

Abrams was even more consequential as nation-wrecker. He was one of the principal architects of the invasion of Iraq. He is an inveterate advocate of “regime change” against countries whose policies he doesn’t like. He has a track record in attempting to overthrow foreign governments both by covert action and outright military invasion. –American Greatness

Wednesday’s heated exchange followed a controversial week for Rep. Omar, who came under bipartisan fire for her criticism of Israeli money in U.S. politics, which was widely interpreted as anti-Semitic.