Trump reiterated that “all options are on the table” concerning Venezuela during a meeting with Ivan Duque (Evan Vucci : AP)

Self-proclaimed “Interim President” Juan Guaido announced he is naming new board members for state oil company PDVSA and its U.S. subsidiary Citgo during a National Assembly session on Wednesday.

“This is an historical agreement that protects Venezuelan assets abroad,” Guaido told press after the session.

Chosen as head of the National Assembly on January 5, Guaido swore himself in as “interim president” during an opposition rally on January 23, with recognition swiftly following from the U.S. and several allied countries. The Venezuelan opposition and U.S. officials have made repeated calls on the armed forces to support Guaido, but with no notable results to date. The opposition-controlled National Assembly has been declared “null and void” since 2016 by the country’s judicial authorities for disregarding a court order to unseat three lawmakers under investigation for voter fraud.

Among the nominations to PDVSA are Gustavo Velasquez, high-ranking figure in the opposition’s negotiating team during the 2017 dialogue held in the Dominican Republic, and David Smolansky, former mayor of El Hatillo and also a leader of Guaido’s far-right Popular Will party. Smolansky fled the country after an arrest warrant was issued for his role in the violent 2017 “guarimba” protests. The other nominations to the PDVSA board were Simon Antunez, Carlos Jose Paisa and Ricardo Prada.

According to Bloomberg, the nominations are meant to be ad-hoc boards to work on specific tasks for a limited period of time. In addition to imposing a de facto oil embargo on Venezuela, the latest round of U.S. sanctions include a freeze of Venezuelan assets in the U.S., chief among them, Citgo and its three high-capacity refineries. Wednesday’s announcements are another step in the attempts to seize control of Citgo, which is valued at U.S. $7 billion. The role of the ad-hoc PDVSA board and its legal authority vis-a-vis U.S.-based Venezuelan assets remains unclear at the time of writing.

For their part, Venezuelan authorities have vowed to defend Citgo through legal means. Attorney General Tarek William Saab dismissed Guaido’s appointments as illegal on Thursday, revealing that a criminal investigation was now in progress. 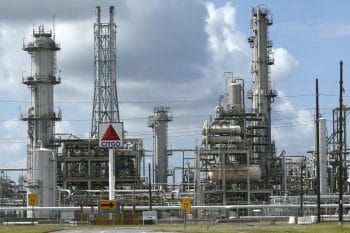 Citgo refinery in Sulphur, Louisiana. The PDVSA subsidiary will be at the heart of legal battles as Guaido tries to take control. (Jonathan Bachman : Reuters)

Likewise on Wednesday, U.S. President Donald Trump held a meeting at the White House with his Colombian counterpart, Ivan Duque. Trump told press that “all options” remain on the table regarding Venezuela. He had previously talked about a “military option” on repeated occasions. For his part, far-right hardliner Duque called on the international community to “advance with the diplomatic siege” against Caracas.

Trump is also scheduled to give a speech in Miami on Monday in which Venezuela will be the main topic. U.S. officials such as Mike Pence and John Bolton have likewise given speeches about Venezuela in Miami, as South Florida is home to the largest community of Venezuelan immigrants.

Tensions are expected to rise in the coming days along the Colombian border after Guaido announced that aid would enter the country “no matter what” on February 23. A USAID press release stated that the aid would meet the basic needs of 5,000 people for 10 days.

Guaido also “ordered” the Venezuelan military to let the aid in, while some commentators have speculated that a limited number of U.S. troops may be deployed for the occasion. A press statement from the Cuban government on Wednesday evening alleged that U.S. troop movements had been reported in the Caribbean between February 6 and 10, warning that humanitarian aid could be used as a pretext for a military aggression.

The controversial delivery of humanitarian aid has been the object of criticism, with over a dozen NGOs with offices in Colombia condemning the use of aid for political goals. The Red Cross had previously stated it would not take part in what they did not consider to be a humanitarian operation, while the UN also objected to the politicization of aid.

“Today the U.S. president threatened military action against Venezuela once more, I call on the world’s solidarity,” he said, before criticizing what he termed Trump and Duque’s “hate-fest.”

Maduro and other Venezuelan officials and military leaders have pledged not to let aid enter the country, condemning it as a media “show” and possible trigger for foreign intervention. Caracas has also complained that the $20 million U.S. commitment pales in comparison to the $30 million in daily lost revenues due to sanctions.

Foreign Minister Jorge Arreaza spoke to reporters at the United Nations in New York on Thursday, announcing the creation of a group that believes the UN Charter is being violated by foreign interference in Venezuelan affairs.

“We have a right to live free from threats and coercive measures,” he stated.

Arreaza was flanked at the press conference by diplomats from 16 countries, including Russia, China, Iran and Cuba, while a meeting to discuss the initiative was reportedly attended by about 50 countries. He added that this group would organize a strategy for the defense of international law and to uphold principles of national sovereignty and non-interference in other countries’ affairs.