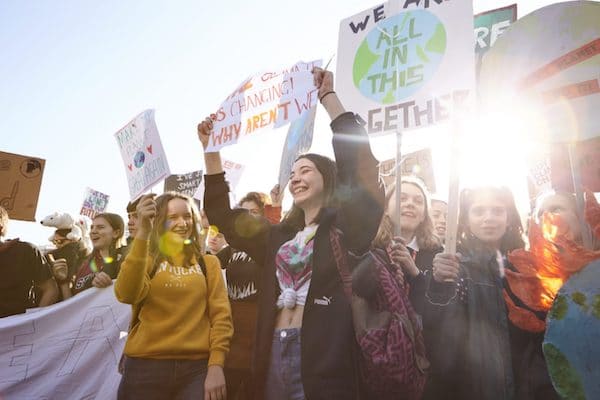 There’s an overbearing sense that the environmental movement is for the middle class, by the middle class. That its primary concerns are protecting our countryside or forcing everyone to adhere to expensive and difficult organic vegan diets, at whatever cost.

We need to dismantle this narrative. Tackling climate change and the raging ultra-capitalist fossil extractivism infrastructure that has created the crisis is no easy task. But the emergent Youth Strike 4 Climate movement, and the inspiration and hope it’s creating, provides a huge opportunity to end social and economic injustice that we’ve seen for generations.

It’s no coincidence that the world’s richest 10% are responsible for over half of total global carbon emissions. Those oblivious to the links between deepening global economic inequalities and the systems which are refusing to decarbonise need to take closer look at what the hell is going on.

Walmart is an example: its net sales in 2010 were greater than Norway’s gross domestic profit, while it’s founders are one of the richest families in the world. Profits stay high because prices stay low. Prices stay low because their operations outsource production to wherever they can exploit the most, pay their workers the least, and capitalise on weak or non-existent environmental regulations. They carter products across the world, predating upon cheap labour while emitting tons of carbon. In the same year they paid just $110 million in environmental fines for dumping hazardous materials into public sewers and landfill. A cheap price to pay for continued consumer-based capitalist and environmental destruction. The result; a carbon footprint larger than almost half the world’s countries. Corporations like this are built exploitation of people and the environment–and only the CEOs see the wealth produced. Here’s to trickle-down economics!

As Naomi Klein puts it: “The same logic that is willing to work labourers to the bone for pennies a day will burn mountains of dirty coal while spending next to nothing on pollution controls because it’s the cheapest way to produce”. Because the number one rule of capitalism is profit at the expense of all else.

Climate change is just one symptom of a society riddled by the sickness of capitalism. The cavernous global wealth gap and exploitation of workers is another. The rising discontentment, disenfranchisement and anger, a third. We cannot continue to treat these symptoms separately but must tackle the virus at the source. It’s not wonder youth around the world are uniting under the banner of ‘system change not climate change’. If we don’t address the system at fault, the symptoms will only continue worsening. If, as we’re on track to exceed planetary warming of 1.5C, the extreme changes in weather will exacerbate poverty for hundreds of millions of people. We need a radical restructuring of our economic system, one which ends our addiction to fossil fuels and consumption based profit, whilst redistributing wealth and addressing income inequality.

It’s a big task. According to the IPCC 1.5C report, we have only 12 years to radically decarbonise before we see catastrophic climate breakdown begin to wreak havoc on our world. Even though labelled conservative in its findings, the report has proven a rallying moment and given the environmental movement and wider society a much needed boot-in-up-the-arse. Now we need to give that same boot to the apathetic delaying and denying politicians that will be held responsible for the unfolding crisis if they aren’t to act with urgency. Whether you consider yourself a social justice warrior, a climate activist or dedicated to equality for all–we must unite under a single banner and push harder than ever before for radical action by our government. Climate justice is economic justice.

There are solutions. We, the people, just need to get into the streets and show our support for them. The Green New Deal has made astounding progress in the U.S., pushed for by a coalition of young climate activists in the Sunrise Movement, economic justice campaigners and an emergent generation of democrats who want an end to inequality. It stands on a platform of radical decarbonisation of the U.S. economy, and associated social security and production of green jobs which would benefit those most marginalised from the US’s current economic system (the poor, Indigenous populations, people of colour).

Similarly, Climate Damages Tax is an exciting new proposal where those who have profited the most from our current environment crisis have to foot the bill for change. It suggests we tax fossil fuel companies on their extraction of carbon (be that oil, gas or coal) and this money is used for reparations in communities already ravaged by climate change. The capital raised would be used to fund a just transition into a green and equitable economy.

We need to let those in power that the current system isn’t working for the many nor the planet. We must hold the wealthy to account. Young people recognise this opportunity and have been rising up in staggering numbers across the world to see this change happen. On Friday, they will be walking out of their classes and lecture theatres in more than 1300 locations throughout the world to demand change immediately. They don’t just want to avoid climate change, they dream of an equitable future which ends the wealth disparities and associated societal divisions manufactured by capitalism. They don’t just know we can achieve change, they know we have to. Failure is not an option.

Join us on Friday. Support us and strike with us. Strike for our planet and strike against those who monopolise global wealth at the expense of everyone else. There’s a better future ahead.

Zoe Rasbash is a student and climate justice activist based in London, campaigning nationally and internationally with the UK Youth Climate Coalition.