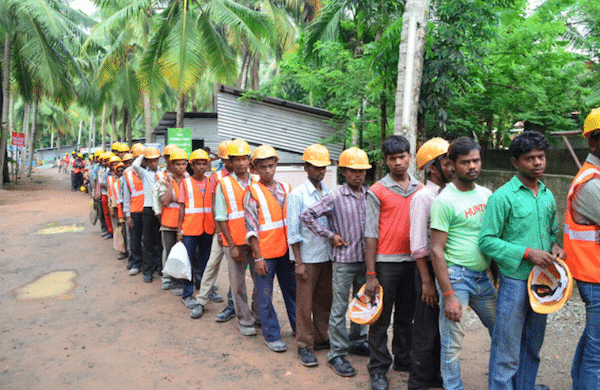 How Economics is Serving to Camouflage Imperialism

Mainstream bourgeois economics, which is what occupies a hegemonic position in the academic world today, is often criticised for being “unreal” for proceeding on the basis of assumptions that obviously do not correspond to reality. This criticism, however, though valid, does not capture its real intent, which is to serve as a means of camouflaging imperialism.

The theoretical content of mainstream bourgeois economics is to advance a set of propositions about the functioning of capitalism which deny any need for, and hence any role of, imperialism in capitalist development. Since imperialism has, in fact, been a crucial element in the functioning of capitalism, these propositions, needless to say, are “unreal”; but simply underscoring their “unreal” character is not enough. This “unreal” character serves a purpose; and this fact must not be missed.

To say that bourgeois economics serves to obscure imperialism is not to suggest that all practitioners of it are deliberately playing this role. Once a particular discourse has gained currency, lots of innocent and unsuspecting economists keep themselves within its boundaries, for professional and career reasons. How this discourse gains currency and how those transgressing its boundaries are professionally penalised, are issues belonging to the sociology of academic life, into which I shall not enter here. I shall confine myself only to illustrating my claim about economics serving to camouflage imperialism; and I shall do so by referring to just two standard theories.

The first is the “theory of growth”, i.e., the theory regarding what determines the long-run growth of a capitalist economy. The most commonly-held position here, which was rigorously developed by Robert Solow of MIT (who got a Nobel Prize for it) and has recently been used by Thomas Piketty (neither Solow nor Piketty incidentally can be considered ideologically Right-wing by any means), is that the long-run growth of a capitalist economy is determined by the rate of growth of its labour force. Of course, to the extent that the natural labour force grows at, say, 3% per annum, and labour productivity at any given capital-output ratio grows at 2% per annum because of technological progress, (i.e., each labourer this year becomes the equivalent of 1.02 next year), the rate of growth of the economy in the long-run, according to this theory, becomes 5%. The rate of growth of the economy in short equals that of the labour force not in natural units but in “efficiency units”. But this is just a variation on the theme; the basic point is that the most dominant mainstream bourgeois theory, which is assiduously taught in almost every university of the world, sees economic growth under capitalism as being constrained by labour availability.

This is a remarkably bizarre proposition, since throughout its history, capitalism has moved millions of people across the globe to satisfy the needs of capital accumulation. Twenty million slaves were forcibly shipped across the Atlantic Ocean from Africa to the so-called “New World” to work on mines and plantations. And after the slave trade came to an end, 50 million Chinese and Indian labourers (according to one estimate) were transported as coolie labour or indentured labour until the first world war, to far off places like Fiji, Mauritius and the West Indies, again to work on mines and plantations to satisfy the needs of metropolitan capital.

When capital has thus ruthlessly uprooted millions to fulfill its need for labour, to claim that capital accumulation merely adjusts meekly to the labour availability at home is absurd beyond belief. And yet this is what mainstream economic theory claims. Of course, if it had claimed that capital accumulation would be constrained by labour availability if capitalism had to make do only with the domestic workforce, and that, therefore, it perforce goes all over the world in search of labour and uproots vast numbers of people to satisfy its need, i.e., if the theory was only an ex ante theory which was then used to provide an explanation of imperialism (as a means of overcoming an ex ante labour shortage), then matters would be altogether different. Whether or not one agreed with such a theory as the central explanation of imperialism, it would at least be an honest theoretical endeavour. Indeed, the well-known Austrian Marxist, Otto Bauer, had precisely such a theory of imperialism which was critiqued by Rosa Luxemburg.

But this is not what mainstream economic theory claims. It talks of capital accumulation being constrained by labour availability not ex ante but ex post; its purpose is to show not the necessity for the observed phenomenon of imperialism because of the factor it emphasises, namely labour scarcity, but to explain the actual pace of capital accumulation in terms of the availability of domestic labour without any reference to imperialism.

To be sure, there have been some theories within mainstream bourgeois economics of late which talk of labour shortage being overcome within capitalism through engendering an appropriate rate of technological progress, so that the growth rate of the capitalist economy is no longer seen as being constrained by labour availability. But even these theories are totally oblivious to capital’s immense global reach and its tendency to move millions of people across the globe to suit its requirements. Mainstream growth theory in short, by invariably seeing capitalism as a self-contained closed system, serves to obscure the phenomenon of imperialism. And this obscuring characterises mainstream economics in general.

My second illustration to underscore this point relates to trade theory, which assiduously propagates that trade among countries always works to the mutual benefit of both. This is a view which is officially upheld to this day by agencies like the World Trade Organisation that want freer trade to be instituted everywhere. In fact, however, the entire experience of colonial economies like India clearly demonstrates the contrary.

Being open to trade was the cause of “deindustrialisation”, which threw millions of weavers and other craftsmen out of employment because of the import of cheap machine-made goods from the capitalist metropolis. The displaced artisans were thrown on to land, raising rents, lowering wages, and depressing incomes of large sections of the population (except, of course, the landlords who on the contrary benefited from it); it was the genesis of modern mass poverty in these economies. And yet students all over the world, including in these very countries, are taught theories which propagate the virtues of free trade ignoring their own experience.

How does mainstream theory achieve this feat of “demonstrating” the virtues of free trade? It does so simply by assuming that all “factors of production” are fully employed in each economy both before and after it has been opened up for trade. If this assumption is granted, then naturally there is no scope for any “deindustrialisation”, since the displaced artisans would, by assumption, get re-absorbed in the export sector rather than remaining unemployed or under-employed.

The fact that the export sector in the colonial economy (or more generally any third world economy even today) consists of primary commodities whose output cannot increase because of limited land availability, so that the newly unemployed would simply crowd the labour market to the detriment of all, is just assumed away. In effect, therefore, the overwhelming historical fact of deindustrialisation is just assumed never to occur! An obviously tendentious theory derived from such deliberately concocted assumptions is then passed off as economic wisdom.

The vacuity of mainstream bourgeois economics had been obvious to those engaged in the anti-colonial struggle from Dadabhai Naoroji and Romesh Dutt to Gandhi and the Left. As a result, in the immediate post-colonial situation there was an effort in India and elsewhere to tell the truth about their own historical experience, and about the vacuity of mainstream economics, to students in colleges and universities in these countries. This alas is no longer the case. In the bid to emulate well-known foreign universities, ostensibly for achieving higher quality, all of whom propagate such mainstream bourgeois economics that serves to obscure the phenomenon of imperialism, the institutions of higher learning in these countries too are now being made to teach such economics to their students.