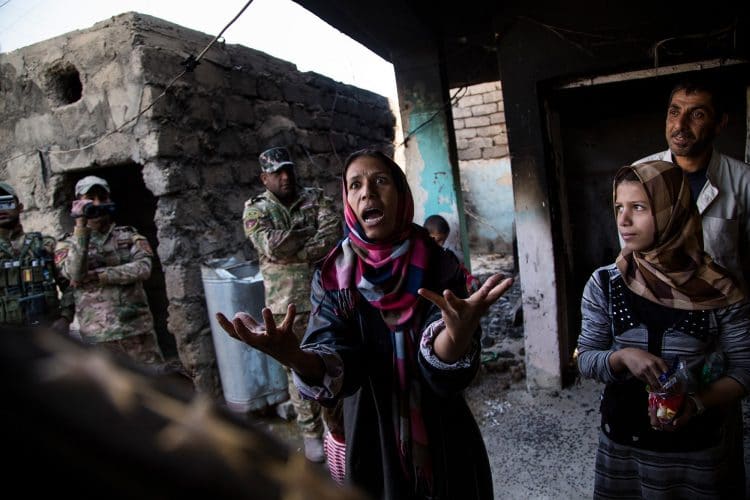 Sixteen years ago, this week, the United States began a new phase in its war on Iraq. It is worthwhile to recall that the massive bombing raid – named Shock and Awe – began on the Dora Farms complex, just outside Baghdad. The United States intelligence agencies thought that Iraqi President Saddam Hussein was visiting his sons Uday and Qusay at the farm. Four 2,000-pound bombs were dropped by aircraft while 40 Tomahawk cruise missiles were fired at the farm from four US warships. All these weapons were made by Raytheon, one of the world’s largest arms dealers (its revenue in 2017 was $25 billion). 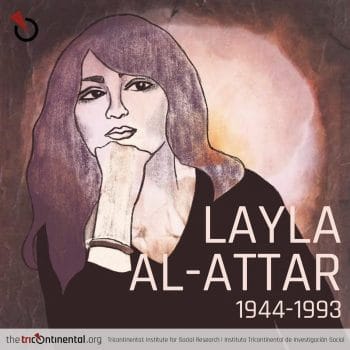 Layla al-Attar, Iraqi artist and director of the Centre for National Art, who was killed in the June 27, 1993 U.S. missile strike on Baghdad.

Saddam Hussein had not visited the farm since 1995. He was not there that night. The bombs killed one civilian and injured fourteen others, including a child – according to the International Red Cross. US Defence Secretary Donald Rumsfeld was unapologetic about this early ‘error’. ‘One has to take account of the realities that you find in the world’, he said wryly. ‘And to not do that would be a terrible mistake’. In other words, it was worth doing the bombing run and killing civilians based on faulty intelligence.

Disregard by the dominant powers of human lives in places such as Iraq has a long history. It goes back a hundred years. In the midst of the carnage is the US missile strike on Baghdad on 27 June 1993, which killed the Iraqi artist and director of the Centre for National Art—Layla al-Attar. There was no reason to kill this pathbreaking artist, as there was no reason to kill so many millions of Iraqis, destroying the lives of millions more (Layla’s daughter Rema lost an eye by the US strike).

Amongst those who were killed by the immense power of the United States were the Reuters employees Namir Noor-Eldeen and Saeed Chmagh. They were shot to death by Apache helicopters. The US denied a role in killing them until Chelsea Manning released the video that clarified the events.

The US government took Chelsea Manning into custody on 8 March 2019 (International Women’s Day) because she would not disclose anything further on the leak of the material. ‘I will not comply’, she said bravely.

Memories of the US war on Iraq linger. And yet, as the poet Dunya Mikhail writes in Iraqi Nights, ‘In Iraq, after a thousand and one nights, someone will talk to someone else’. War cannot be allowed to define Iraq, since Iraqis want to build a world that is beyond the wars that have destroyed so many lives. ‘Chickens in the villages won’t peck on human flesh on the grass’, writes Mikhail of her hope that Iraq will go beyond its suffering.

The sunrise will be the same
for those who wake
and those who never will.

and every moment
something ordinary
will happen
under the sun.

But nothing ordinary is allowed for Iraq. The US government continues to threaten it – disband the militias, do not buy Iranian oil, stop the flow of goods from Iraq into Syria. Do this, do that. That is the arrogance of imperialism, the non-stop demands upon countries to behave in a way that is determined from afar.

Iraq cannot afford to be the marionette of the United States. It has its own history and its own geography. This week, defence chiefs from Iran (Mohammed Baqeri), Iraq (Othman al-Ghanimi) and Syria (Ali Abdullah Ayyoub) met in Damascus (Syria) to consider what the US departure from Syria will mean for the region. Iraq has opened the al-Qaim border crossing to allow goods – including Iranian goods – into Syria. This will form a vital part of Iran’s plans for the reconstruction of Syria. That Iraq refuses to stop buying Iranian oil has meant that the US government was forced – to save face – into offering Iraq another waiver to circumvent the US sanctions on Iran. Iranian President Hassan Rouhani went to Iraq to settle plans for the building of a rail connection that will run from Iran’s Shalamcheh border crossing through Iraq and to the Syrian port of Latakia. This is part of the Iranian sector of the Chinese-led Belt and Road Initiative. 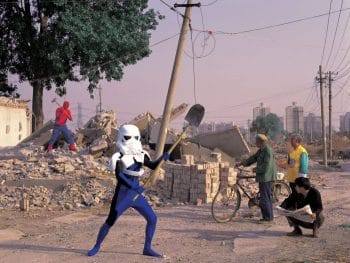 The 2003 US war on Iraq began at a time when the United States appeared to be unassailable, the most powerful country in the world. Quagmire in Afghanistan and Iraq as well as the general economic crisis of 2007-08 has weakened US power. The ascent of Donald Trump to the US presidency and his attack on multilateral institutions has further set the US on a course of isolation or at least has dampened what appeared to be the overwhelming power of the US over world affairs.

Disobedience to US positions seems to be rising. Turkey, a NATO ally of the US, has refused to give up its Russian S-400 missile system. Turkey’s disregard for US demands is not a sign that Turkey’s government has in any way shifted its far right orientation, merely that this is a signal of the fraying of US authority (all the more of interest given Turkey’s deep internal economic problems, as laid out by E. Ahmet Tonak of Tricontinental: Institute for Social Research). Italy, a member of the European Union and of the G-7, will not only open up its ports to the Chinese-led Belt and Road Initiative – including the port of Genoa – but it will develop the ports with China Communications Construction and COSCO, both state-run ventures. Fears of Chinese control over the Mediterranean ports (it also has a project in Greece) have set off alarms in Europe. Europeans are quite prepared to insert themselves all over the world but are uncomfortable when the tables are turned. 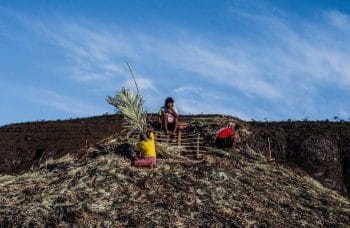 Not only have Russia and China driven an agenda across Eurasia and into Africa, but they are now looking to be far more active in South America. Neither are strangers to the continent, with China being an important buyer of primary commodities from the continent over the past decade. China has – over the course of the past few years – invested in energy projects in Ecuador and Mexico as well as road and rail projects in Peru and Bolivia. It is from this motivation, rather than anything specifically political, that China and Russia have emerged as important economic partners for Venezuela. Billions of dollars have been loaned to Venezuela, and – this week – the Venezuelan government has said that it will rely upon Chinese and Russian purchases of its oil.

Meanwhile, Trump met his Brazilian twin – Jair Bolsonaro – in Washington and suggested that Brazil might be brought into the NATO alliance (Bolsonaro, as a sign of his fecklessness, has turned over Brazil’s Alcântara space base to US satellite launches). Beneath this rhetoric, another reality presents itself. Since 2009, China has been Brazil’s main economic partner. Chinese trade with Brazil ($102 billion) is now twice US trade with Brazil ($57 billion). This is not necessarily good for Brazil, which has positioned itself as the supplier of raw materials for China (and is now poised, as we say in our recent dossier, to mine the Amazon beyond its limits). But this is – nonetheless – the reality of the current Brazilian economy. Bolsonaro can say what he wants in the White House. When he returns to Brazil, he has to deal with the Chinese.

Venezuela has made its bet on the shift from a uni-polar to a multi-polar world order. Close observation of the developments here are essential, for they will tell us how much the needle has moved away from US domination of world affairs towards a fragmentation of power. But this fragmentation, this multipolarity will not emerge fast enough. It will take its time. Time is something that new social experiments do not have. They are attacked before they can breathe. That is my assessment of the socialist experiment in Venezuela. It has not been given enough time to overcome the penalties of the colonial and oligarchic past. The Venezuelan people must not only fight to defend their revolution, but they must also fight to overcome the burdens of the past (such as a lack of economic diversity, enforced by the old oligarchy). That was the theme of an interview I gave in Caracas earlier this month. 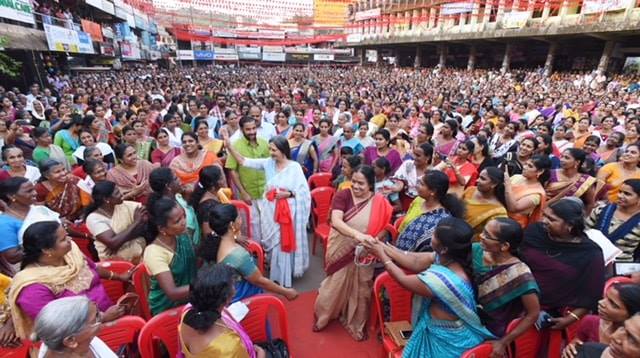 Women’s Parliament in Palghat, Kerala, in support of the Left Democratic Front, 12 March 2019.

India goes to the polls next month. Hundreds of millions of people will line up to cast their ballot. Nate Singham of Tricontinental: Institute of Social Research interviewed our senior fellow P. Sainath on the impact of the organisations of farmers and agricultural workers on the elections. Women’s organisations have released a charter of demands for the political parties. They reject the world of poverty and violence. They reject the IMF style of ‘women’s empowerment’, as assessed by Tricontinental: Institute for Social Research’s Tanya Rawal-Jindia. They want to end the ‘nightmarish regime of violence, fear, hunger and unemployment’. They want the sunrise to be the same for those who are awake, and those who will soon wake up.