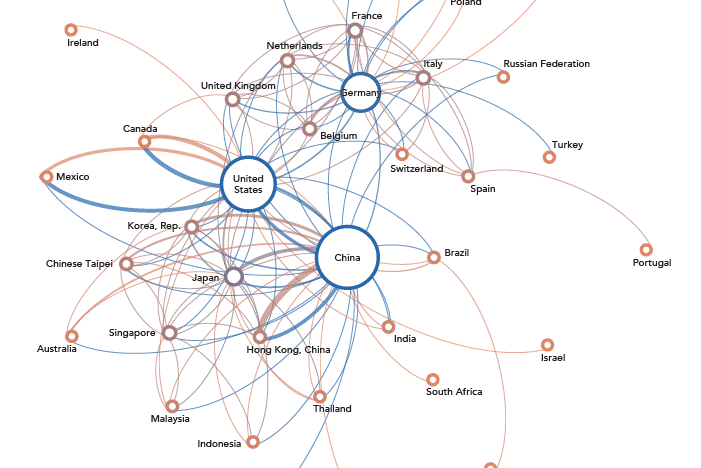 The U.S. and China are the two dominant poles in the global economy, as illustrated in the figure below which traces the global trade in parts and components. And they have a very uneasy relationship. However, despite current tensions, it is unlikely that either side will succeed in dramatically changing it. The main reason is that the relationship has been heavily shaped by the activities of leading multinational corporations, including from the US, and their interests in maintaining it can be expected to set limits on the actions of both governments. 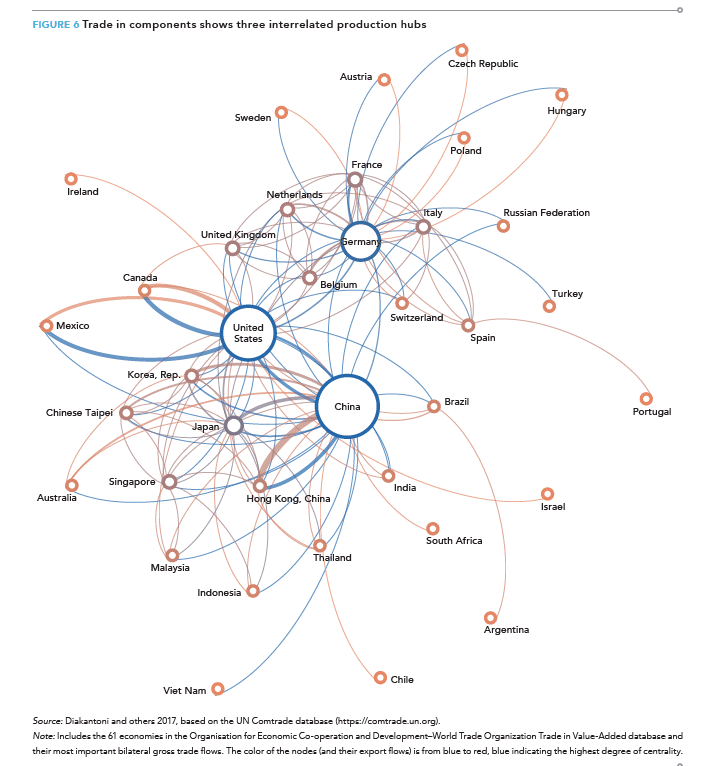 Xi Jinping, the president of the People’s Republic of China and head of the Communist Party of China, is actively pursuing policies that he hopes will reduce the country’s dependence on foreign multinational corporations and western markets. Toward that end, he has promoted an industrial modernization program called “Made in China 2025” which aims to make the country a global power in 10 strategic industries, signed new trade agreements, created new regional institutions such as the Asian Infrastructure Investment Bank, launched new global initiatives such as the Belt and Road Initiative, and strengthened the country’s military.  This effort is often described in the western media as an attempt at decoupling from the west.

The U.S. government for its part sees these efforts as a challenge to U.S. dominance and has taken steps to block them and to isolate China. For example, the U.S. has levied tariffs on Chinese exports to the US, and has demanded that China do more to respect U.S. intellectual property rights and open up more domestic markets to U.S. firms. It has also sought to stop other countries from using Chinese technology, especially in their wireless networks, and from participating in Chinese organized regional organizations and initiatives. It also seeks to include a so-called “poison pill” clause in the US–Mexico–Canada free trade agreement which would limit the ability of Canada and Mexico to sign trade agreements with China without U.S. approval. The U.S. hopes to insert such a clause in other trade agreements in order to force countries to choose whether to have closer economic ties with the United States or with China. It has also greatly expanded its military activities in areas surrounding China, for example, in Vietnam and the Philippines.

While the differences between the two governments are serious, and represent conflicting elite interests, there are other important factors that need to be considered in evaluating likely future developments. One of the most important is the profit considerations of multinational corporations.

The continuing importance of multinational corporations in China

Foreign direct investment has played a key role in boosting Chinese growth and creating a regional production system in which East Asian and Southeast Asian countries sell parts and components to China-based firms for final assembly and export outside the region, especially to the U.S. and Europe. As an Asian Development Bank study explains:

The pattern of inward FDI to Asia reveals firms’ motivation of entry that is different from that into the rest of the world. . . . Foreign affiliates in Asia established by FDI tend to be engaged more in trade and investment for the purpose of reexporting intermediate and/or final goods to the countries outside the host country (vertical and export-platform FDI) than those in other regions.

Rapid expansion of FDI to EEA [emerging East Asia] has been closely associated with the establishment of regional production networks by multinational companies, especially with the PRC as the region’s main assembly and production hub to create positive spillovers on the rest of the regional economies. Indeed, based on the number of foreign affiliates in Asia that both import and export, the PRC is the most popular host for vertical and export-platform FDI with various parent economies [as shown in the table below]. 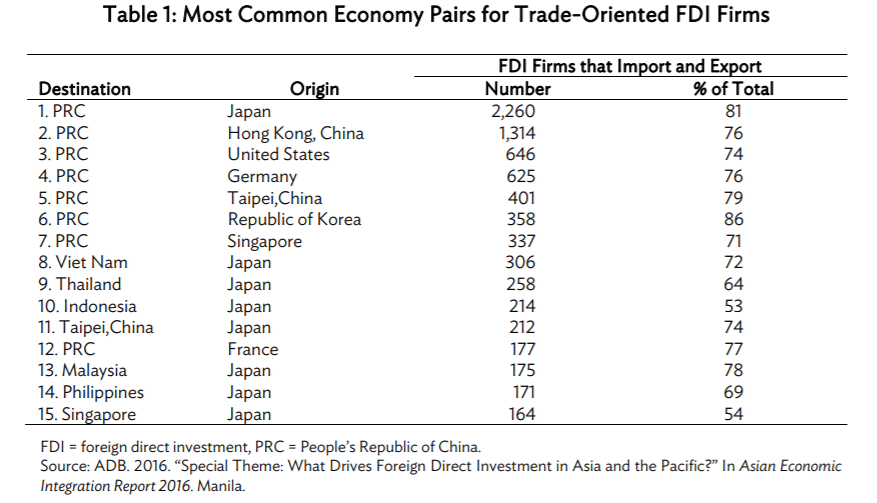 This positioning by foreign firms in China, as both importers and exporters, means that China, and emerging East Asia more broadly, remain tied to the global economy, and in particular the U.S. economy. The continuing strength of this relationship is highlighted in the following figure from the Asian Development Bank study. The high correlation of 0.85 between the growth in U.S. non-oil imports and the growth in exports by emerging East Asia (which includes the PRC) in the period after the Global Financial Crisis, makes clear that there has been relatively little decoupling since the crisis. 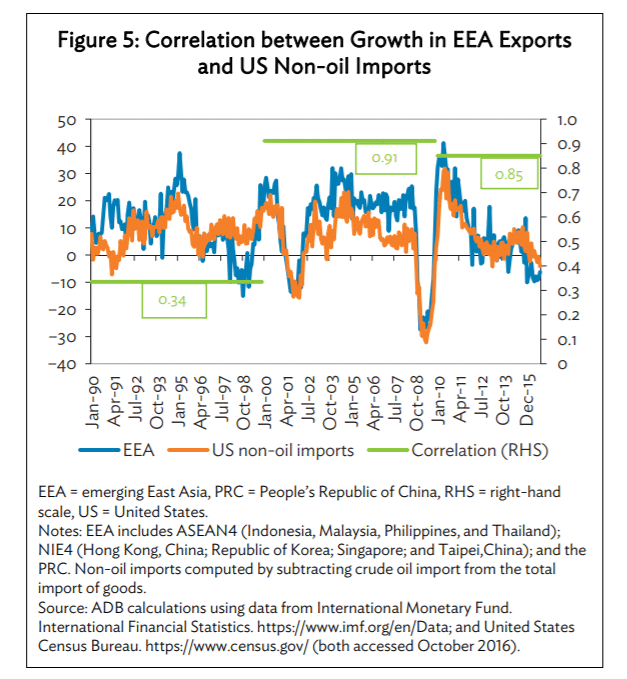 In addition, foreign multinational corporations continue to produce China’s most technologically advanced products and exports. Chip making is a good example of the former. Historically, the semiconductor industry has concentrated on producing relatively standard computer chips that could be used for multiple purposes. However, increasingly the electronics industry is demanding new, more powerful and specialized computer chips for use in devices involving artificial intelligence, self-driving cars, and the many products tied to the “internet of things.”

China continues to import most of its chips, but as a Stratfor article notes, foreign firms dominate semiconductor manufacturing in China as well, and especially of the most advanced chips:

the biggest players are often international companies with domestic subsidies. South Korea’s SK Hynix and Samsung are the two largest by revenue, followed closely by the United States’ Intel and Taiwan’s TSMC. But the two Chinese companies in the top six — Huahong Group and SMIC — are generations behind leading non-Chinese companies. And while Chinese tech giant Huawei has become a major player in designing certain chips, those powering the company’s latest generation of high-end smartphones were, in fact, built by TSMC.

As for exports, Sean Kenji Starrs, writing in the Socialist Register 2019, provides the following table listing the top ten exporters from China. As we can see, electronics are China’s most important export product. However:

The overwhelming majority of China’s top electronic exporters are foreign firms (especially Taiwanese and South Koreans–only Huawei makes the top ten) Samsung and LG perform their own final assembly in China but Western TNCs (including increasingly Japanese) prefer to outsource their lower value production to Taiwanese firms operating in China. 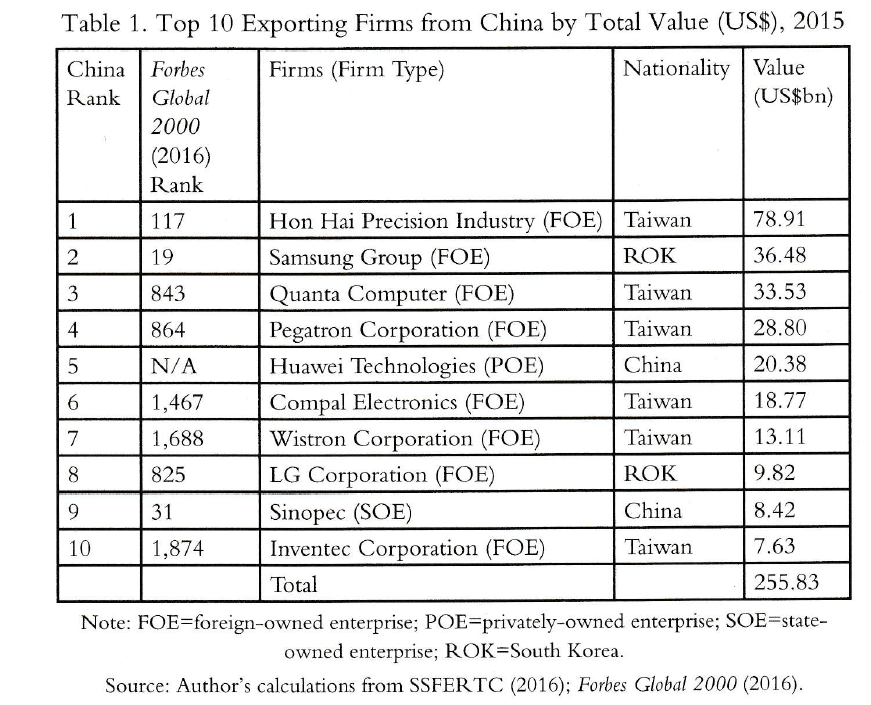 In short, it will be very challenging for the Chinese government to dramatically end its reliance on foreign multinational corporations or restructure its trade relations, without seriously jeopardizing Chinese growth (which is already falling fast) and the country’s political stability.

Moreover, as the economist Prema-chandra Athukorala shows in the table below, U.S. multinationals operating in China, also use the country as a profitable platform from which to export to other countries.  In fact, in 2013, “the value of goods exported to the rest of the world by U.S. MNE affiliates in China was US$37.5 billion, which was almost three times the value of their exports to the United States.”

Thus, China is extremely important to the operation and profitability of leading U.S. firms. And any U.S. administration would have to think very carefully about the economic and political repercussions if it were to pursue policies that triggered a serious disruption in existing economic relations with China.

In sum, it is clear that both governments operate subject to real limits set by powerful multinational corporations, limits that will likely constrain China’s push for decoupling as well as the U.S. drive to isolate China. That said, it is important to keep in mind that there is an even more powerful force that could undermine the stability of the relationship and the contemporary global economy: the growing contradictions at work in both countries that have led to massive inequality and workplace resistance, ever slower growth and financial imbalances, and the likelihood of recession in the United States.