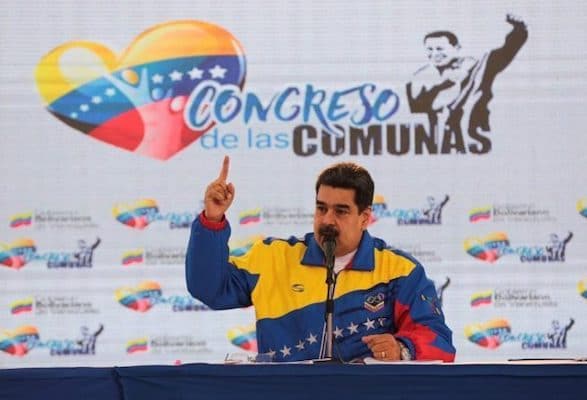 Editorial Note: This is an excellent article, the only addition we would suggest is pointing out the poisonous section written by Raul Zibechi. We are leaving the link to the piece in question here just for you to “enjoy” it.

ROAR published an article Can the Bolivarian revolution survive the Venezuelan crisis? containing the views of different professors, but with only two worth reading: Dario Azzellini’s and George Ciccariello-Maher’s. Of the others, Raul Zibechi appears to be the chosen faux left commentator committed to repeating U.S. ruling class propaganda against Venezuela. Gabriel Hetland represents that faux left current that justifies its abandonment of Venezuela by spinning the tale that the Bolivarian movement underwent a qualitative degeneration once Chavez died and Maduro became president.

The ROAR editors state in their introduction:

To shift the focus away from the battle for the presidential throne, we asked a group of international experts to share their thoughts on the chances of survival of that most important, inspiring and admirable achievement of the Venezuelan people: the Bolivarian Revolution. Expressed in the agricultural and urban communes, the worker cooperatives, social movements and local councils, the Bolivarian revolutionary process….

The communes, cooperatives and Chavista social movements are an essential part of the Bolivarian Revolution, but it is false to claim they are the revolution. They are some of its shining examples, but these authors, to varying degrees, use this aspect of the revolution to downplay other significant victories by non-communal Chavista forces.

Here, it is necessary to emphasize the significant achievements the Bolivarian revolution in its struggle against Trump’s escalated imperialist regime change. Venezuela has repeatedly slapped down U.S. attempts to use the OAS as cover to justify “humanitarian intervention.” Delcy Rodriguez, as Minister of Foreign Affairs, in her exemplary speeches stood up to and defeated the campaign in the OAS to legitimize military intervention in Venezuela. The OAS campaign against Venezuela has so backfired, that Venezuela was not discredited, but the  OAS was, losing most of the credibility it regained after 2009 when it demanded the U.S. support readmitting Cuba. The OAS may well not survive the damage done, while Venezuela remains intact.

Delcy Rodriguez’ replacement, Jorge Arreaza, assumed her same role in combating the U.S. attempts to use the United Nations to garner support for a war on Venezuela. In both cases, the Venezuelan government forcefully defended the rights of states to pursue their own political and economic development. Venezuela has emerged standing tall, leading the anti-imperialist struggles in the Americas, and has repeatedly set back U.S. imperial goals.

Today Venezuela not only leads the struggle to defend Latin America, it has become a focal point in the struggle against U.S. attempts to reassert control over the world. Venezuela’s cause challenges countries around the world to either acquiesce to or oppose U.S. world domination. Whether intentionally or not, Venezuela is helping to forge a more solid world anti-imperialist alliance.

The Maduro government’s careful strategy and principled stand over the last few years has increasingly exposed the U.S.’ hypocritical propaganda and blatant illegal interference in other states. Venezuela has driven the U.S. to make costly blunders, particularly with the disastrous backfire of the U.S. attempt to impose Juan Guaido as president. Trump and Bolton, lacking the finesse of Obama, have both made it known that U.S. control of Venezuelan oil is their real goal. The U.S. government has been forced to more and more cast off its “humanitarian” crusade and show to the world their actual purpose is simply to invade and conquer Venezuela.

These are significant world victories for the Venezuelan revolution, and significant defeats of U.S. power. None of these Chavista victories can be attributed to what ROAR considers the Bolivarian Revolution–the communal and cooperatives system–but are due to what ROAR disparagingly calls “the battle for the presidential throne”. ROAR shows little interest in the exploring these recent defeats the Empire has suffered.

One of the worst statements in this ROAR article is by Julia Buxton, who, like Raul Zibechi, serves as a conveyor belt for the Empire’s anti-Venezuela propaganda:

Maduro’s survival hinges on the sustained loyalty of the armed forces, unity within government ranks and ongoing economic and technical assistance from foreign partners including Russia, China, India, Turkey and Cuba. All will wish to extract rewards for their loyalty and the unpredictability of their support for Maduro is a real vulnerability.

In reality, Maduro’s survival hinges on the continued militancy of the Chavista people, who still regard Maduro as their spokesperson. The Venezuelan armed forces are loyal to that movement; the military’s loyalty is a reflection of the loyalty of the people to Chavismo. Russia, China, India, Turkey and Cuba’s defense of Venezuela is not contingent on their extracting rewards for their loyalty. If anything, the support of Russia and China has cost those countries more economically than they have gained. Cuba itself has a long honorable history of aid to anti-imperialist struggles, as in Angola, and its “only” reward has been the worldwide honor and respect the country has gained for its selfless commitment.

The ROAR article does not state that the US goal is not simply to remove the Maduro government. It seeks to crush Chavismo, uproot and eliminate Chavismo, not just in Venezuela, but in all Latin America. Its goal is to crush the struggle against neoliberalism and imperialism.

Those authors who highlight the communal movements overplay the weight of these movements. The communes and cooperatives exist mostly in rural areas, not in the cities, and do not contribute significantly to national production. They are an example of what could be possible on a national basis if a socialist revolution did take place.

The commentators consider the communal movement to be the left, radical current in Venezuela. Both Marx and Lenin had serious qualifications about this view on communes. For instance, in 1866, Marx summarized in the Instructions for the Delegates of the Provisional General Council to the Geneva Convention of the International Workingmen’s Association:

a) We acknowledge the co-operative movement as one of the transforming forces of the present society based upon class antagonism. Its great merit is to practically show, that the present pauperizing, and despotic system of the subordination of labour to capital can be superseded by the republican and beneficent system of the association of free and equal producers.

b) Restricted, however, to the dwarfish forms into which individual wages slaves can elaborate it by their private efforts, the cooperative system will never transform capitalist society. To convert social production into one large and harmonious system of free and cooperative labour, general social changes are wanted, changes of the general conditions of society, never to be realised save by the transfer of the organised forces of society, viz., the state power, from capitalists and landlords to the producers themselves.

(for more on Venezuelan cooperatives and the views of Marx, Lenin and Luxembourg see Marta Harnecker’s Venezuela—after the elections: what is to be done? and Marx, Luxembourg and Lenin on the Role of Cooperatives and A Look at George Ciccariello-Maher’s Building the Commune, Radical Democracy in Venezuela)

Marx and Lenin did not assume communal movements intrinsically to be proponents of socialist revolution. The historical experience of anti-capitalist struggle showed them that carrying out a socialist revolution is benefits greatly, and less prone to costly errors, when led by class conscious, predominately working class, leaders organized in a national organization. Such an organization does not exist in Venezuela, not in the PSUV, not in the trade unions, not in the communal movements. None of the writers in this article even advocate for creating this type of revolutionary organization.

The survival of the Bolivarian Revolution partly depends on our work in other countries defend Venezuelan sovereignty. We must continue to educate and mobilize the world around the U.S. Empire’s damaging sanctions and its goal of crushing Venezuela. We must make clear that the U.S. will not stop until it has crushed all similar anti-neocolonial and anti-neoliberal movements in the world.

Stansfield Smith is an anti-war activist focused mostly on combating U.S. intervention in Latin America. He was a member of Chicago Committee to Free the Cuban Five, which has become Chicago ALBA Solidarity. He can be reached at stansfieldsmith100 [at] gmail.com.