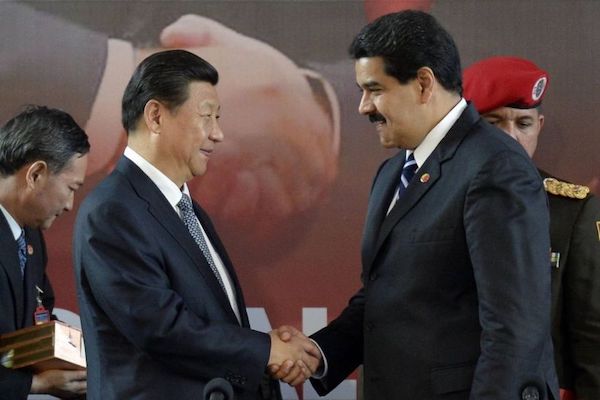 China formally invited Latin America to participate in the Belt and Road Initiative (BRI) in January 2018, during its meeting with the Community of Latin American and Caribbean States (CELAC) in Santiago, Chile, where the Chinese and Venezuelan chancellors shook hands. Since then, 16 countries in the region have expressed their intention to be part of this trade connection project and have signed agreements to do so.

In addition to Venezuela, which is Beijing’s strategic ally in the construction of the multipolar world, Panama, Brazil, Mexico, Bolivia, Antigua and Barbuda, Costa Rica, Chile and Guyana have also signed trade agreements.

The global scale plan that began in 2013 with President Xi Jinping’s public announcement, envisages the strengthening of infrastructure, trade and investment between the Asian giant and approximately 65 countries, comprising 62% of the world’s population and 75% of the world’s known energy reserves.

In this regard, Latin America becomes a great transoceanic transport line on the Road because it shares the Pacific Ocean with China, the natural extension that connects the two economic zones, as China commented in its meeting with the CELAC countries in early 2018. There he emphasized the fundamental importance of the continental block in the international cooperation plan.

However, investments to realize the BRI do not arise from nothing. Bilateral projects with different nations in Central America, South America and the Caribbean date back to 2005. That year, they received 4.7 billion dollars in Chinese investments. By 2018, this figure increased by 425%, closing at 20 billion dollars.

In the last eight years, commercial exchange also grew by an additional 22 fold, exceeding $280 billion in 2017. Data from the Economic Commission for Latin America and the Caribbean, provided by Secretary Alicia Bárcena, position the Asian country as the second most important trading partner for the region, and the first for South America, supplanting the United States.

The intention to interconnect national economies globally through the BRI under emerging Chinese leadership formalizes and rebrands more than a decade of prior trade relations.

The complex Sino-Latin American relationship that until the 1990s focused on investing in mining products and natural resources for transportation to China entered the new century with the goal of consolidating high-impact transportation infrastructure, including the construction of highways, seaports, and railroads.

According to the China-Latin America finance database prepared by The Dialogue, a U.S. political think-tank, there exist 150 transportation-related projects, almost half of which are in the construction phase.

In addition, in recent years it has diversified into the energy sector, investing 96.9 billion dollars in the transmission and generation of electricity.

In terms of the number of projects, Bolivia, Brazil and Jamaica are the main destinations for Chinese investment in physical communications channels. In the Andean country, more than 20 projects have been developed linking highways and bridges, while in Brazil, where the sum total exceeds 28 billion dollars, 13 agreements have been discussed in relation to transport infrastructure, similarly to Jamaica.

China has placed special emphasis on the Pacific, Caribbean and Atlantic port areas. In fact, it is more successful in acquiring or building such facilities. Around 20 projects have already been completed or are underway in Mexico, Cuba, Panama, Venezuela, Ecuador, Brazil and Chile. Port facilities in Colombia, Peru and Uruguay are being discussed.

Of these ports, the 19 cooperation pacts on trade and infrastructure that were agreed around the Panama Canal have special relevance. This was the first country to sign a contract that is officially part of the project: the execution of a high-speed railroad between urban areas.

In June 2017, Panama severed diplomatic relations with Taiwan, opening the way for giant projects such as the construction of the fourth bridge over the Panama Canal, a cruise port at the Pacific entrance and a container port located near the Atlantic entrance.

Because of its geographical position, Chile is also considered a natural access to the region via the Pacific route. In addition to the port areas, China is investing in telecommunications through the proposal to build a submarine fiber optic cable that crosses the ocean over a length of 24,000 kilometers. This will allow a better exchange of information between Asia and Latin America.

The geopolitical response of the United States

It is striking that many of the countries that are commercially affiliated with the BRI’s most emblematic projects are those that the United States considers allies or its strongest partners in the Latin American region.

The omnidirectional cooperation with its economic rival, that ultimately does not seek to impose or modify the national political visions of the countries with which it is related and, instead, strengthens the common development of the blocks of the Global South, has been a serious stumbling block to the establishment of Washington for maintaining a dominant position in the region.

China’s declared intention to establish itself as an alternative power in the international system has not encountered criticism in Latin America, and this reaffirms geopolitical fears in the United States.

China challenges U.S. hegemony in the midst of the debacle of the liberal world order headed by the Trump Administration, seeking to alleviate the impact by unleashing an aggressive global tariff war from which Latin American countries cannot escape.

Comparing what each economic model offers, China’s global openness in conditions of equality contrasts with the so-called U.S. protectionism which has no intention of safeguarding national interests but only the economic interests of private business groups.

Beyond the constant visits by high-ranking political officials to impose upon satellite countries to escalate the conflict in Venezuela and military exercises in border territories under the pretext of national security, there are no tempting projects that compete with China’s immersion in the economic agendas of Latin America and the Caribbean.

In the last two years, the “take it or leave it” violence promoted by the United States has had serious consequences for trade relations with nearby countries. Mexico has already felt the shock when assessing the conditions of the Free Trade Agreement, which has led to a trade deficit of 64 billion dollars. Other trade agreements with Colombia, Chile, Peru and Central America are the focus of U.S. trade decisions.

In terms of results, the figures are rather eloquent. Foreign Trade Data from the U.S. Census Bureau indicates that from 2017 to 2018, Latin American exports and imports had a 7.13% and 6.54% increase.

On the contrary, the Sino-Latin American alliance saw imports and exports increase by 30% and 23%, respectively. States flee from unilateral measures that force them to negotiate in a position of disadvantage to embrace plans that offer complementary economic policies, currently in line with China and multipolar countries.

Is the American decline accelerating with every step towards the Monroe Doctrine guideline?

Venezuela, a Chinese trading partner that threatens the “backyard”

The triumph of projects that encompass nascent relations between China and Latin America is linked to the political stability and governability of the territories, as well as to the regional integration of the continent.

The consolidation of the regional bloc was initially forged during the first period of Hugo Chávez’s government. The project entailed the transfer of the center of power from the West to the Eurasian axis, so that efforts to create solid diplomatic ties with sister nations as another multipolar force was a voluntary commitment in the early years of Chavismo.

That is why ALBA, Petrocaribe and CELAC, multilateral platforms that brought together the diverse national interests of the region, were formed from Venezuela. For the same reason, attacks on these integration mechanisms and the political actors that direct them have increased in recent years, with U.S. “partners” such as Colombia leading Prosur-type initiatives.

The government of President Nicolás Maduro is the main focus of aggressions because it is the region’s vanguard against the Monroe Doctrine of the 21st century, proposing an international trade plan with other emerging nations, far from the hegemony of the U.S. dollar and utilizing its energy and mining resources to further the cause.

Each aggression to the Venezuelan economy by use of financial instruments or irregular operations to render the territory ungovernable, is aimed at damaging (among other things) the Asian trade agenda the country is involved in, China being considered an “existential threat” to the interests of the Pentagon.

However, Venezuela, the main gateway to the BRI’s entry into what the United States considers its “backyard,” and to other anti-neo-liberal proposals, has curbed attempts to change the national political order even as it strikes back with the multipolar world approach that worries Washington so much.