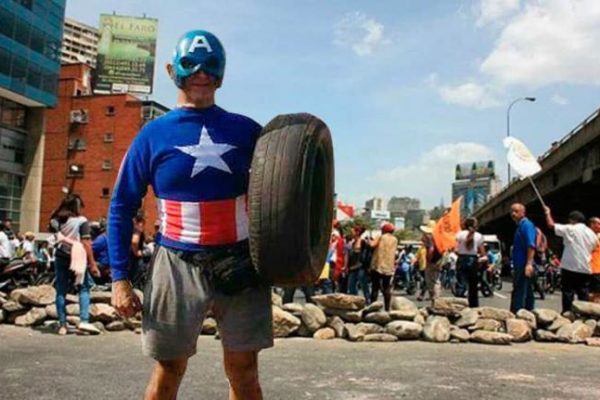 Venezuelan Minister of Culture Ernesto Villegas has been calling attention to employment by the anti-Chavez opposition of Yankee symbols in marches and demonstrations. The US flag, effigies of Uncle Sam, replicas of the Statue of Liberty and even characters from the entertainment industry have marched to protest against the legitimate government of President Maduro, support Guaido and play at being Yankees.

Bolton himself cynically compared the operation against Venezuela with the lethal stranglehold that the character of Star Wars, Darth Vader, used to liquidate his opponents.

Villegas circulated a very shocking photo: a humble-looking opponent marches with his son on his shoulders. The boy, about 6 or 7 years old, is disguised as “Captain America”, a very popular Yankee superhero. The protester also carries a rustic sign that reads: “Captain America, my future depends on you.”

The character of Captain America was born in an old comic from the time of World War II and was facing at that time the evil of the Rome-Berlin-Tokyo Axis. It obviously represented the US and he wore the colors of the flag on the suit and the shield. He then resumed in (a comics) series and films and had other enemies, but without losing the patriotic appearance of his clothing.

The pathetic call of the anti-Chavez protester may spring from naivety, from the frequent confusion between reality and fiction that occurs in hypnotized consumers of Hollywood byproducts, or the terrible impulse to metaphorically claim US military intervention in their country. Who knows?

Did this protester act so fascinated by Captain America of his own free will? Or did he have a sponsor? Someone who paid for the boy’s disguise and hired them (father and child) to participate in the march?

Anyway, the message of the poster “Captain America, my future depends on you” causes us restlessness, anxiety, pity, disgust. And it reveals the profound and devastating effect of the machinery of cultural domination on the subjectivity of the people. If that ordinary man (let’s say it’s that: a man of the people) decided to make a double call to Captain America, through the disguise of his son and the poster, it’s an example worthy of study.

It has been said that one of the most notable triumphs of the reactionary manipulation through the traditional and the most novel means is precisely the gestation of the «poor of the right».

It is not unfortunately a creature so rare and exotic. There have been electoral victories of the extreme right in our region thanks to the vote of popular sectors. So-called “democracy” has been betrayed, it is true, and there have been frauds, tricks, “fake news”, repeated defamation of other candidates, all kinds of cheating. But even if it hurts, we must recognize that the deceitful message of the extreme right has been heard among the most suffering victims of the system.

Returning to our devout anti-Chavista Captain America, we could say yes, that is a “poor right”, an unhappy “maniatado”, without any freedom, led to the herd of system servers. His photo, so illustrative, speaks to us in particular about the role played by the imperial symbols promoted by the entertainment industry in the construction of a reactionary and even fascistoid worldview among helpless, confused people, without handholds.

This demonstrates once again what Fidel repeated, paraphrasing Martí: “Without culture, there is no possible freedom”. Or that other statement: “Every revolution is the daughter of culture and ideas.” He did not speak only of artistic culture, of course; but that which allows human beings to understand their environment, understand themselves and settle in reality from their deepest and most reasoned convictions. Ignorance, foolishness, frivolity, leaves the human being helpless before manipulation. Those of us who defend equality, justice, true democracy, must be able to create the essential antidotes to the cultural “balloon-colonization”, as Frei Betto has said.

Solidarity with Venezuela now! Protect the embassy
Eight Years After: No End in Sight for Clearing the Fukushima Nuclear Disaster