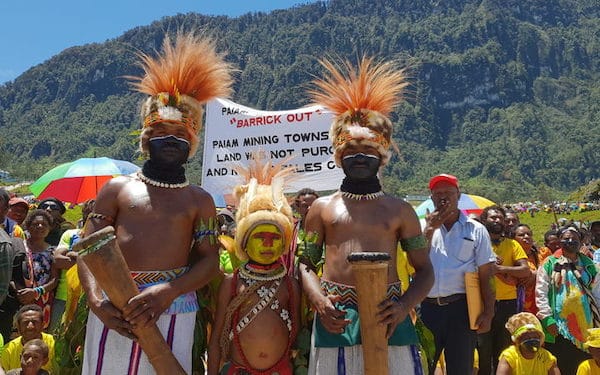 Mayor of Caracas Erika Farías Peña, on 30 April at a mass demonstration.

It is a habit of the oligarchy to take refuge in a military camp and ask the Generals to move on their behalf. This is what Juan Guaidó and Leopoldo López did on Tuesday morning, on the last day of April. López fled house arrest to join Guaidó in the vicinity of the Carlota military base in Caracas (Venezuela). This is not the first attempted military coup, with the political leadership of the oligarchy begging for the men in green to set aside the Constitution. Roberto Micheletti drove to the Honduran presidential palace in Tegucigalpa on the back of a tank in 2009. The oligarchies of Thailand and Pakistan have also recently begged the army to depose an elected head of government and produce councils of peace and order, words that are emptied of meaning in this context.

Three lonely men on a bridge near La Carlota, like boys playing with the fate of their nation.

By the end of the day, the coup attempt fizzled out. It helped little on the streets of Caracas that the entire U.S. establishment–from the President to Senators–cheered on Guaidó and openly asked the military to mutiny. The few soldiers who did cross the line–blue armbands on–hastened to the Brazilian embassy to seek asylum. Leopoldo López, who left his house arrest for this adventure, made a dash for the Chilean embassy. López, Guaidó and Edgar Zambrano met on a bridge near the military base, chastised by the lack of support, their bravado deflated, the fate of the nation in the hands of others.

By nightfall, it was clear that the coup–one of many attempted in Venezuela–had failed. This was despite the clear support delivered to Guaidó by the United States and by the Lima Group, set up in 2017 to overthrow the government in Venezuela. What prevented the coup–despite the difficult conditions inside Venezuelan society–was the mass mobilisation in the streets. I recall seeing some of these rallies earlier this year, the people determined to protect the sovereignty of their country, determined to allow the Bolivarian process to stumble along against all odds. It is this that continues to prevent–for now (as Chávez would say)–the victory of the oligarchy and its outside backers.

The Lima Group comprises most of the right-wing Latin American political forces. But it has one unusual member, one who has been at the forefront of its efforts–Canada. Why is Canada, otherwise so particular about putting forward a face of liberalism and decency, at the lead of trying to overthrow a government by force? 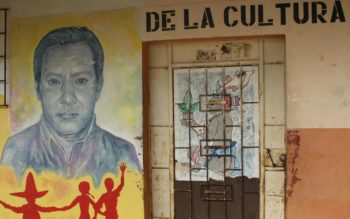 A close look at Canada’s government and its business interests reveals something quite different than the casual liberalism of its reputation. In 2017, three Canadian professors–Shin Imai, Leah Gardner and Sarah Weinberger–released a study called The ‘Canada Brand’: Violence and Canadian Mining Companies in Latin America. They show that between 2000 and 2015, at least 44 people had been killed as a result of violence around Canadian-owned mines in Latin America. The stories are chilling, the violence routine and deadly.

One of them relates to the death of Marcelo Rivera, an anti-mining activist from San Isidro (El Salvador) who was murdered on 18 June 2009, his body thrown into a well, his fingernails and hair plucked out, his trachea broken, his thumb fixed inside his mouth, his body hogtied. Marcelo, a member of the FMLN, had opposed the mine owned by the Vancouver-based company Pacific Rim because he feared for the environmental devastation it would cause. His opposition was snuffed out.

There is a very high correlation between the lands that mining companies want and the lands that are controlled by indigenous communities. This is the case from Chile to Guatemala, from Canada itself to Papua New Guinea. Canada’s Cameco, the world’s largest uranium company, will begin to mine in the lands of the Tijwarl community–an aboriginal people in Western Australia. Protest upon protest has not awakened the Australian public to the dangers posed to the Tijwarl community, nor has this stopped the hand of the Australian government. They are determined to mine for profit. Vicky Abdullah, a Tijwarl leader, tells us (in the video below) that the mine will ruin ‘mother earth’.

The situation in Tijwarl, Australia.

This is an echo of the Andean concept of pachamama, mother earth, an echo of the idea of ‘rights of mother earth’ that is so important to international indigenous movements from one end of the planet to the other. It is a direct echo of the Mother Earth Accord signed by First Nation Chiefs in Canada with all concerned parties, around the issue of the TransCanada pipeline. The story of the First Nations is a story of denigration and betrayal. Nick Estes’ book, Our History is the Future, lyrically tells the story of the Standing Rock struggle in the United States, which is a struggle that takes place in the centre of indigenous communities across the planet.

If you look closely at the data, as our researchers at Tricontinental: Institute for Social Research did, you will find that 60% of the world’s mining companies are based in Canada, and that most of the scandals around indigenous lands are linked either to Canadian or Australian mining companies. Canada’s long and negative history regarding the First Nations inside the 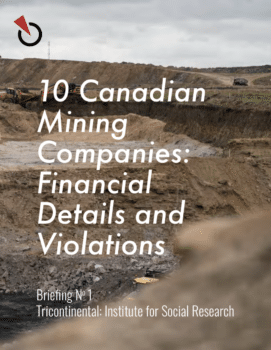 Canadian territory has–over the course of the past several decades–spilled over into the American hemisphere and outwards. In our first Briefing, 10 Canadian Mining Companies: Financial Details and Violations, we document the ten most important Canadian mining companies (Spanish and Portuguese translations coming soon). Each entry, only a page long, offers a sense of the size of the company and one of its most important scandals. ‘Collectively’, we write, ‘Canadian mining companies display a depraved indifference to human life. And this indifference is considered to be just a natural or necessary side effect to economic growth’.

Our Briefing opens with Barrick, one of Canada’s largest and most influential companies. The ‘violation’ that we detail is its role in rape, violence and arson at the North Mara Mine (Tanzania), at the Durban Roodepoort Deep Mine (South Africa) and at the Porgera Gold Mine (Papua New Guinea). These, and many more, are a series of criminal acts, tragedies for the people multiplying as the indifference of capitalism runs roughshod over their hopes.

Decades ago, John Bita–a poet from Papua New Guinea–wrote Song of an Old Woman on Bougainville (1971): 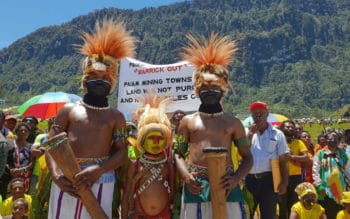 For the past several months, we have been studying the situation at the Porgera mine and the struggle led by the people of the area organised around the Akali Tange Association. The Association shared with us their documentation of the routine violence, the chemical attacks on the population, the violence of the company’s guards, the destruction of the community. McDiyan Robert Yapari, one of the leaders of the Akali Tange Association, told me, ‘We have tried to reach for assistance to air our grievances for everyone to know what a Canadian mining company–the Barrick Gold Corporation–does to the indigenous communities here in Porgera’. But, he says, their appeal falls on ‘deaf ears’. My report provides a summary of the situation in Porgera, the lawsuits, the protests, the need to get the mine’s lease renewed by 12 May 2019. 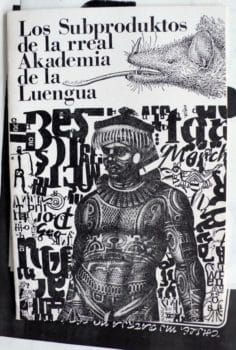 Canadian firms have long fought a battle with the Venezuelan government, since Hugo Chávez won his first election in 1999. Most recently, the Canadian gold company–Gold Reserve–has been fighting to access Venezuela’s resources, notably in Bolivar State. Chávez had removed these companies when the oil prices were high and when oil revenues flooded into the country. The Bolivarian Constitution (under articles 127, 128 and 129) put in place strong environmental protections, and the 2013-2019 Homeland Plan’s fifth strategic objective is to ‘preserve the life of the planet’. These protections are contrary to the IMF’s policy of structural adjustment, which undermines environmental protections routinely. The phrase used to describe such protections is eco-socialism (our Tricontinental: Institute for Social Research  economist Ahmet Tonak has co-written a very useful essay that responds to the Trump administration’s attack on socialism).

The mining firms disregard these concerns. Words like democracy and human rights are impediments. The mining firms want to put their hands into the earth, pull out the stone and carry away the wealth. Which is perhaps why Canada is at the heart of the Lima Group, eager to overthrow the Bolivarian Constitution, eager to evict that government as it has evicted indigenous people from their lands from Papua New Guinea to Chile. 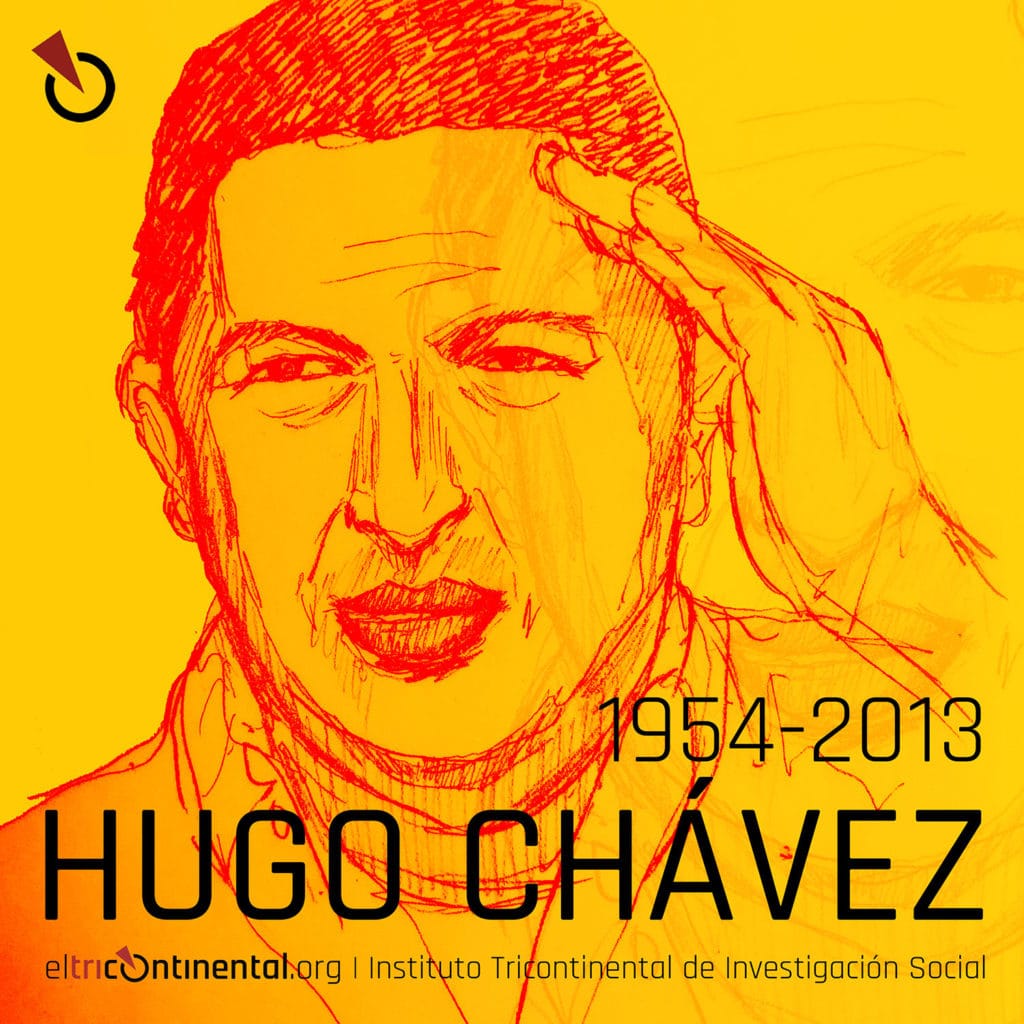