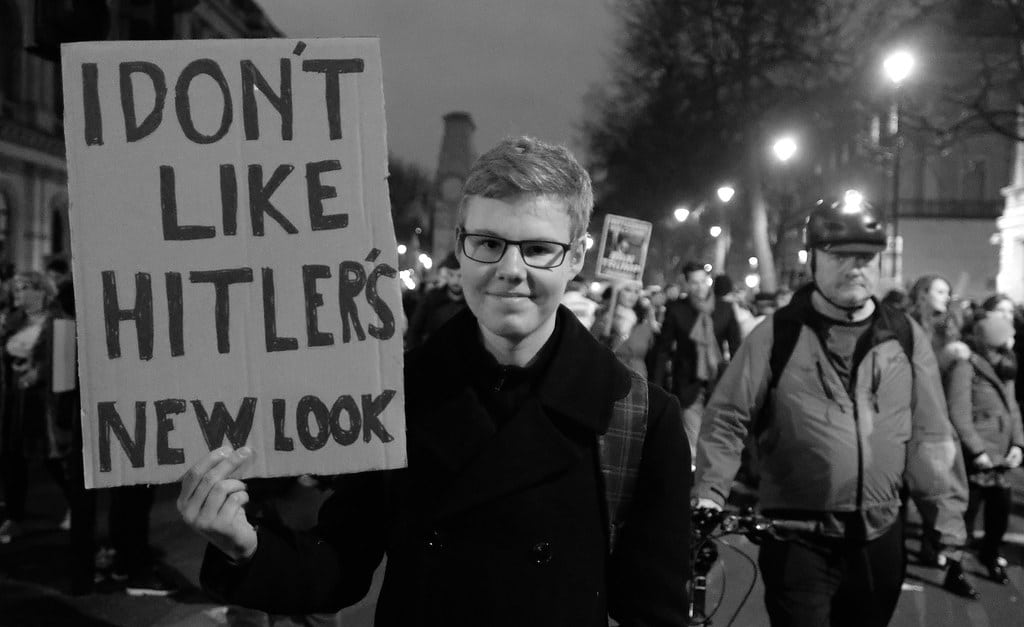 “I don’t like Hitler’s new look” sign held by a protestor during an anti-Trump protest in London in 2017. Credit: Alisdare Hickson.

The events of recent days in Venezuela corroborate, for the umpteenth time but now with total brazenness, Washington’s intention to seize that country by establishing a neocolonial protectorate at any price. John Bolton’s press conference on April 30 attests to what we have said. A serial liar, he acted and spoke with absolute contempt for the Charter of the United Nations, which clearly establishes the principle of the self-determination of nations and condemns any attempt to subjugate one nation to the will of another.

What a cowardly operetta buffoon. Of Bolton we can say what Jorge Luis Borges said about the Argentine military: “He never heard a single bullet whistle in his life,” based on an excluding premise: “Maduro must go” and Juan Guaidó, who according to Washington is the legitimate president of Venezuela, must assume his functions as soon as possible.

According to this shady National Security Advisor to Donald Trump, Maduro’s days are numbered and he barely holds on to power thanks to a constellation of international forces completely alien to the democratic game and the will of Venezuelan citizens.

In his statement, this despicable supremacist pointed out the three actors that, according to him, sustain Maduro: the Cuban troops, some 22 or 25,000 and that are the ones that really control the Bolivarian Armed Forces, transforming the Cuban doctors into combat troops; the collectives, those “motorcycle gangs of thugs,” the creation of Havana and “other external forces” which, a little later, would suggest Russia stands out among them.

“We need,” he said in his opening statement before questions, “a Venezuela governed by its people and not by outside forces, and that is what we are looking for”.

Bolton mentioned Cuba or “Cubans ” eleven times in his speech, something absolutely extraordinary that reveals that the objective of this escalation of aggressions and interventionism transcends the homeland of Bolívar and Chávez and has multiple objectives that include the rebel island and Nicaragua, explicitly fulminated as “the troika of tyrannies” in the Americas.

President Trump, Bolton said, “wants to see a peaceful transfer of power from Maduro to Guaidó” without further delay. Those who support Maduro, and particularly those who are not Venezuelans, should know that “all options are on the table”. The next day Mike Pompeo, another buffoon–who by his last name and even by his physical appearance looks like a member of Al Capone’s mob–who to the shame of the U.S. serves as Secretary of State, advanced his attack on another “external factor,” Russia.

This prompted a resounding response from that country’s Foreign Ministry, which reminded him that “Washington’s interference in Venezuela’s affairs is a flagrant violation of international law. This pernicious influence has nothing to do with democracy.

Bolton’s increasingly muddled mind prompted him to intensify his attacks on Cuba. The collectives supposedly created by the Cubans were mentioned five times at the press conference, and he also uttered additional utter nonsense: that General Padrino López and the General Staff of the FANB report to Havana and that it is from there that they receive their orders.

Russia was also criticized and commented that undaunted Vladimir Putin had been warned that his involvement with the Venezuelan “regime” was a cause for enormous concern in the United States. We have already mentioned the Russian government’s response to this barrage of nonsense.

From the foregoing it can be inferred that we are approaching a decisive situation for the future of emancipatory struggles in Latin America and the Caribbean. Not only Venezuela, but also Cuba and Nicaragua are under the spotlight and are a U.S. military objective. The complicity of the “democrats” of the region with this attempt to take over Venezuela is repugnant, as is the collusive and cowardly silence of the European governments, unworthy vassals of a deranged Caligula and their clique of criminal fanatics willing to do anything.

They lie shamelessly and knowingly, but lying and defaming is a crucial chapter in the manual of destabilizing operations that the White House has read and applied on countless occasions. Remember that they were talking about the sophisticated weaponry that Cuba and the USSR had introduced into the Dominican Republic during the short government of Juan Bosch. When the invasion took place in April 1965, 44,000 Marines found a Dominican army equipped with obsolete weapons, remnants of World War II, and a people that repelled them with machetes, stones and sticks.

They lied to create a climate of opinion favorable to the coup against Joao Goulart in Brazil in 1964, against Salvador Allende in 1973, against Maurice Bishop and the New Jewel Movement in Granada in 1983, when there was also talk of the Cuban presence and sophisticated armaments carefully hidden in homes specially adapted for that purpose. They were never found.

They also lied when they reported the existence of weapons of mass destruction in Iraq, which were never found. And before that, in 1945, when they said there was no trace of radioactivity in Hiroshima and Nagasaki after the atomic bombing. Therefore, the U.S. government, the curse of all the free peoples of the world, lies by default.

And now they are lying treacherously about the situation in Venezuela and Cuba’s role in that country. They count on the complicity of the hegemonic media, which have become pestilent sewers where anything is said that could destroy the reputation of an enemy of the empire. Day and night non-stop they excrete their lies with outrageous impunity and total contempt for what should be a Hippocratic oath of journalists (and also of academics and intellectuals) that can be no other than “telling the truth and denouncing the lies,” as Noam Chomsky said succinctly.

But no. The voices of so many vestals of the republic and democracy that have harassed every progressive government in this part of the world remain ignominiously silent. In this way, they reveal their dishonourable condition of foul-mouthed charlatans paid by the empire. They reveal that they lack independence and professionalism and that their words are fatally contaminated with the dirty money of the White House gangster who wants to culminate the larceny that has already begun in Venezuela by appropriating its international assets (gold in England, CITGO in the United States, etc.).

And the same goes for those responsible for international organizations. What does Mr. Antonio Gutérres, Secretary General of the UN, say in the face of the vulgarities uttered by Bolton? Not to mention Luis Almagro, the secretary general of the OAS, who competes head to head with Lenín (a) “Donald” Moreno in the torva dispute to establish who is the most corrupt traitor in Our America. The list would be endless.

All accomplices: the “serious” journalists, the sophisticated intellectuals with refined manners that display false objectivity, the domesticated mainstream academics, the international bureaucrats and the rulers of this region and of Europe say nothing of an operation that each day more closely resembles the annexation of Austria and the Sudetenland by Hitler in 1938, in the face of the passivity–and complicity–of the “international community”, a euphemism to avoid speaking of the emperor’s lackeys.

Necessary participants and concealers of crimes because what has happened in Venezuela with economic sanctions, dispossession of its wealth abroad and aggression against the daily life of Venezuelans, deprived of electricity, water, transportation and other basic goods, constitutes a crime against humanity.

Martí, in his dazzling clairvoyance, denounced the White House’s addiction to looting and pillage. The Americans, said the Apostle, “believe in necessity, in the barbaric right as the only right: this is ours, because we need it”.

We need Venezuela’s oil because it is an irreplaceable ingredient in our military apparatus and when there is not a drop of that resource in the world, then our enemies will be left without it, we will have it and we will be able to impose our world domination without counterweights. As we need it, it will be ours, for better or worse. This and no other is the exclusive reason why the noble and brave Venezuelan people are suffering the aggression of imperialism.

In his famous book Hegemony or Survival, Noam Chomsky set forth the thesis that Washington has an even more ambitious project of world domination than Hitler’s Third Reich. Many thought at the time that the great American linguist was delirious. However, later events proved him right.

Against this plan led today by Trump and his collaborators, free peoples from all over the world are on the front line with Venezuela. Therefore, international solidarity with their struggle is an inescapable moral imperative for all women and all men of good will.