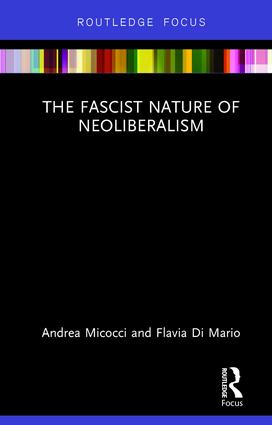 Undoubtedly we live in the age of neoliberalism. There might also be a link between Neoliberalism and fascism. If one agrees with the rather enticing idea that Hayek’s ideology pamphlet The Road to Serfdom is the ur-texts of neoliberalism, then neoliberalism was indeed invented during the dying days of German Nazism and Italian fascism. The idea of a Fascist Nature of Neoliberalism argues that capitalism and neoliberalism aren’t what liberal and communist thinkers alike thought it is. Instead, it has some telling characteristics that make it similar, in fact, to what fascist and reactionary Catholic political movements have dreamt. Worse, neoliberalism has transmogrified into a new fascist militia even though there are no longer any Italian style black-shirts (Fasci Italiani di Combattimento) or German style brown-shirts (SA and later SS, dressed in black) roaming the streets rounding up Jews, gypsies, homosexuals, trade unionists, communists, socialists, anarchists, progressive academics, democrats and the like.

Despite the rather obvious lack of present-day fascist brutalities, there is a spirit of capitalism that is fascistic. Indeed, capitalism never contradicted German Nazism or Italian fascism. Capitalism has never challenged any other form of right-wing authoritarianism, ranging from Spain’s Franco and Chile’s Pinochet to Liberia’s Charles Taylor. Instead, on neoliberalism, seven key points can be made:

Germany’s Nazis called the first point Volksgemeinschaft–a racially purified community. Capitalism and contemporary neoliberalism seek quite a different society compared to Germany’s racial nightmare and the fascist dictatorship of the bourgeoisie. Neoliberalism’s society is based on rampant consumerism with engineered and homogeneous masstaste. In mass consumerism with supporting mass media, everyone is made to know Coca Cola, IKEA and Toyota. Neoliberalism’s global ideology not only supports homogenous mass taste, it also presents some organisations that fall within their prescribed ideology as acceptable. At the same time, neoliberalism undermines socialist and social-democratic parties as well as trade unions until unions are eliminated. The deliberately engineered decline of trade unions is not seen to be unethical by a non-democratic but deeply ideological actor, namely, neoliberalism. Meanwhile, business ethics has become a pure ideology,not only justifying neoliberalism and business attacks on trade unions, but also camouflaging corporate criminality and environmental vandalism on a global scale.

Given the prevalence of Eisenhower’s military-industrial complex, neoliberalism still drives wars and global aggression. To mask many of neoliberalism’s evils, itwelcomespopulism (e.g. Donald Trump, USA; Nigel Farage, UK; Viktor Orbán, Hungary, etc.). Under populism, the other is presented as an outcast. Seeking to eliminate class politics, contemporary European right-wing populism feeds on presenting the other–refugees and migrants–as dangerous. Lastly, there are inherent tensions between politics (a populace’s quest for social welfare, public schools, hospitals, etc.) and economics including an unbridled free market and The Privatization of Everything. Neoliberalism conceals its own contradictions as efficiency problems. Such problems are increasingly solved through authoritarian means.

Much of this process is designed to create an intellectual homogenisation of the individual.In short, rafts of people–including entire economics departments in universities–have been made to subscribe to neoliberalism’s global free market ideology. The power of neoliberal hegemony also supplies a general logicforpigeon-holing anything that might come forth. Beyond that, neoliberalism’s organic societies, to take a typical fascist dream also means that no revolution is possible. Neoliberalism presents this as TINA–there is no alternative. Expectedly, in the metaphysics of capitalism, perfect freedom and perfect deception overlap. This should be called fascism.Under fascism and Nazism, there were next to no freedoms and definitely no elections. By contrast, today’s highly engineered and corporate mass media-driven election spectacles have been reduced to system-stabilising choices–Coke-vs.-Pepsi, Republicans-vs.-Democrats, Labour-vs.-Tories, and so on. Voting under neoliberalism often means not much more than one hierarchy replaces another hierarchy. Just as George Orwell once said,

from the point of view of the low, no historic change has ever meant much more than a change in the name of their masters.

Perhaps what goes for fascism also goes for neoliberalism: fascism not simply had an ideology, it had ideas fascism endowed itself with a set of practical ideas for practical politics. Indeed, neoliberalism has an ideology and it has ideas. In the case of fascism, the age-old propaganda still works: fascism made trains run on time–the trains to Auschwitz in the case of Nazi-Germany, for example. Neoliberalism’s practical ideas for practical politics are,for example, lowering unemployment. Neoliberalism does this largely by creating the working poor and the precariat. These lower the statistics of unemployment–not unemployment and under-employment. It creates a favourable media image of neoliberalism. Neoliberalism also claims to have practical solutions for global warming, changing light bulbs, for example. What we are facing under neoliberal capitalism has been descried by Wallace-Wells so magnificently: the coming of the Uninhabitable Earth. What we are engaged in is a bit like the overpaid CEO in his corporate jet dropping a teabag into a recycling bin while saying I do my bit!

Without Fordist mass-production and mass-consumerism there is no neoliberalism. Neoliberalism depends on ten nebulous points: fiscal discipline, public expenditure, fiscal reform, financial liberalisation, competitive exchange rates, liberalisation of trade, foreign direct investment, privatisation, deregulation, and property rights. Neoliberalism works in authoritarian and democratic regimeswhether there is the presence of a dictator or of a democratic regime, neoliberal actions can be adopted as shown by the dictatorship of Pinochet in Chile and the Bush administrations. Neoliberalism can or perhaps has to live with democracy–fascism can not.

Like fascism, neoliberalism is not a set of economic policies but a new and more effective technology of power. While neoliberalism may enjoy power, fascism is all about power.Indeed, Neoliberalism uses its power–not directly like fascism–but indirectly, shaping political power through its ideology. As a result, it seeks to get its political parties into power while remaining in the background, working as an hegemonic ideology. Once in power, domestic and international brutalities are a characterising factor of neoliberalism. This, of course extends into workplaces.

Hence, there is a link between neoliberalism and Managerialism. Under the formula of management + ideology + expansion = Managerialism, Managerialism infiltrates many previously non-managerial areas (schools, hospitals, universities, etc.). It relentlessly enforces managerial concepts such as performance management and KPIs into every eventuality of workplaces. Beyond that, Managerialism turns human beings into human resources or Menschenmaterial–human material.

Both inside workplaces driven by Managerialism and outside, where society is driven by neoliberalism, the guiding motto has become credere, obbedire, combattere–believe, obey, combat. Neoliberalism makes you believe in the so-called free market; obey its unseen and increasingly brutal forces; and combat rising job insecurity, stagnating and falling wages and your colleagues who are set against you in an eternal workplace battle for promotions, bonuses, and so-called personal advancement. Credere, obbedire, combattere was the motto of Benito Mussolini. People in power and their lackeys can only stick to the neoliberal policies that increase inequalities while increasing the grip of the state over the economy and politics.

Perhaps fascism-equals-neoliberalism. Still, there are three problems with this: a linguistic problem, a conceptual problem and an historical problem. The least serious problem is the linguistic problem. Neither fascism nor neoliberalism has a nature as the title of the book says. Fascism and neoliberalism are not natural. Instead, they are man-made inventions–created mostly by men. The second problem is conceptual in character. In many ways, the concept of neoliberalism and the concept of fascism do not match even though parts of both may overlap.Contemporary neoliberal societies are not fascist societies. Unlike Italian fascism and German Nazism, democracy allows you to change government, to leave neoliberalism behind and to move towards another politics. Changes can also be made in the sphere of political economy. According to the Economist’s Democracy Index, Norway, Iceland, Sweden and New Zealand, for example, are democracies, these countries are not the same as Italy in 1929 or Germany in 1939. In short, neoliberalism can live with democracy–fascism can not.

Digging deeper into the conceptual problem, one discovers even more problems. The next conceptual problem engages with an Italian, a compatriot of the authors of the book, namely, the Italian writer and philosopher Umberto Eco. Eco-outlined fourteen conceptual elements that together create fascism. Recently, Eco’s fourteen elements have been applied to Germany’s new right-wing party AfD and to Donald Trump concluding–correctly–that Donald Trump is not a fascist. Trump may very well be racist, a conman and a cheat but he is not a fascist. Trump is not the new Adolf Hitler of the USA. And he is no way a new Benito Mussolini even though Trump may be as pompous as Mussolini. Finally, fascism and Nazism do not have mid-term elections to the U.S. Congress (6th November 2018). Instead, they have Auschwitz.

The next drawback is the problem of history. Neoliberalism’s economic policies cannot be equated with fascism’s economic policies. Neoliberalism is not about self-sufficiency and war nor is it about autarky. Neoliberalism may welcome war and even encourage warfare, but its entire economic system is not geared toward war-making. War-making was the focus in Italy and was even more so in the case of Nazi Germany. In addition, fascism represents crisis capitalism with a cudgel in the form of marauding, beating and torturing brown-shirt thugs (Italy) and the SA (Germany). Neoliberalism simply does not have that. The Italian and German police forces are not even close to fascist thugs and Hitler’s SA.

Fascism also prefers the well organised and ideologically confined homo corporativus while neoliberalism fancies the homo economicus. The latter clings to the hallucination of a rational choice driven by cost-benefit analysis and hyper-individualism. Perhaps one of the key differences between neoliberalism and fascism is what is called a state-directed private ownership economy. While neoliberalism would definitely agree with the private ownership economy, neoliberalism will very strongly reject such a state-directed economy. In short, capital, remains, as ever, private. If neoliberalism could, it would almost abolish the state or reduce it to a nightwatchman state. By comparison, fascism likes the strong and all-controlling über-state run by the Fasci Italiani di Combattimento (Italy) and in Germany by the Kapo, the Blockwart, and the Übermensch–the racially superior Aryan. Despite these shortcomings, The Fascist Nature of Neoliberalism remains an insightful and exquisite discussion of neoliberal fascism.

The Fascist Nature of Neoliberalism is published by Andrea Micocci and Flavia Di Mario.