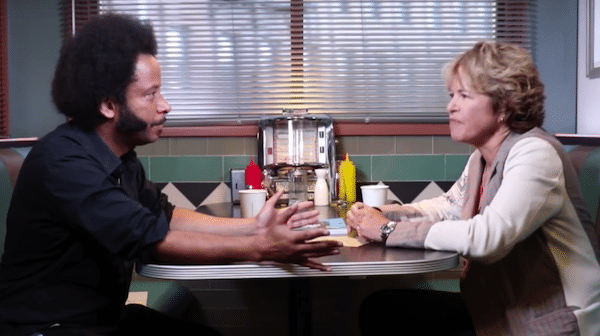 This week, “The Laura Flanders Show” covers the fight against government repression through art and action. Flanders interviews Ellen and Rachel Meeorpol, a mother and daughter each seeking change–one through litigation and one through fiction.

Ellen Meeropol is the author of two novels about law, justice, and government surveillance. Her most recent book, “On Hurricane Island,” explores a fictional secret domestic detention camp for citizens.

Ellen’s daughter, Rachel Meeropol, is the senior staff attorney at Center for Constitutional Rights, where she works on prisoners’ rights, Muslim profiling, and the criminalization of dissent. These issues have touched both of their lives personally. Ellen’s father and mother in-law, Rachel’s grandparents, Ethel and Julius Rosenberg, were executed by the U.S. government on spy charges.

Also on this episode: Part one of our interview with Boots Riley, a poet, lyricist, MC, screenwriter, activist, organizer, radical, and founder and frontman of Oakland based hip hop group The Coup. Riley was also one of the most influential voices and leaders of the Occupy Wall Street movement, and is the only known musical artist whose surveillance by intelligence agents has been exposed by Wikileaks documents. Flanders looks back at Occupy Wall Street and the politicians getting slandered now.

The great work
The plot to kill Venezuela