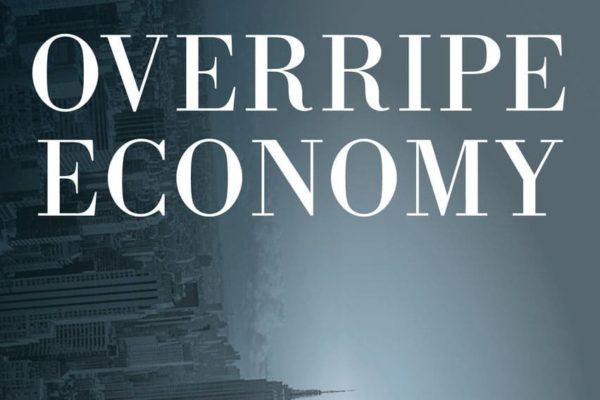 Alan Nasser’s Overripe Economy is a profound historical look at the U.S. economy from the 1870s on that not only brings the lessons of its history and development up to the present, but offers deep insights into the economic bases for its “degeneration” from rapacious but productive capitalism to its present financialized capitalism replete with secular stagnation and reliance on debt, credit, and financial bubbles rather than production as such. Capitalist profit now comes not from production of “widgets” as Nasser calls them, but increasingly, from financial speculation and emoluments for the already very rich. The result for the working class is massive inequality and the fall from secure full-time employment generally into the current, seemingly permanent, workforce precariat. This means more insecure work, more technological unemployment, and the banishment of both capital and labor from the production process even as productivity sharply increases, due to labor-saving and capital-cheapening innovations. (While this assertion of Nasser’s is subject to debate among Marxists, Nasser maintains that this “banishment” occurs both because of the cheapening of capital goods and the replacement of human labor by robots and automation more frequently and effectively, especially in the digital age.) All these portend only continuing economic stagnation, growing inequality, and both overproduction and underconsumption (two sides of the same economic coin). They also mean, under the regime of austerity, a direct threat of fascism and measures of militarization and curbing of dissent by the state to control an increasingly restive population left out of the economic prosperity overwhelmingly available now only for those at the very top. But Nasser also proposes as a necessary solution, a vital countermeasure, a popular movement for a “democratic socialism” (in several places) or “people’s democracy” (11) lest austerity-cum-militarization and repression become a “normal” way of life. Hence the book’s subtitle, American Capitalism and the Crisis of Democracy.

Nasser, a Professor Emeritus of Political Economy and Philosophy at Evergreen State College in Washington state, has written here a book that is vital, deeply informative, and crucial. It is a compelling tome of a truly-accurate political economy, one of real life—that is, where there’s the intermingling of politics and economics, rather than strict reliance on economic forces. Nasser convincingly shows that, rather than rely on the “competitive free market,” already late in the Nineteenth Century oligopolistic U.S. capitalism turned to the state, especially the federal government, to regulate competition, stabilize prices, and stanch the destructive tendencies of competitive capitalism toward destructive price wars, bankruptcies, and inability of prices to adequately cover fixed costs, and essentially, save capitalism from itself—a process of reliance on the state rather than the “free market” that continues, despite capitalist rhetoric, to this day. Nasser’s book is also a contribution in economic theory, history and policy as well, showing both the insights of “mainstream” economics and economists in compelling, occasionally unorthodox ways. He also offers an adept critique of “mainstream” economics, its misunderstandings, and its errors, from a left radical standpoint.

Overripe Economy is erudite text; two Appendices on disaccumulation and net/gross investment, and on what Keynes really meant and wrote; a thorough bibliography; and a most informative table (12-23) outlining the various stages of this “maturing” to “mature” to “secularly stagnant” U.S. capitalism and the various interventions undertaken to either prop it up in its underlying instability; or else, in the last two interventions, Occupy and the Bernie Sanders Presidential campaign of 2016, openly and vociferously protest its workings. All this together gives us of the left a truly useful tome on economics, economic history, and economic policy that both provides an overview and gives us vital lessons on “What is to be done?” in the here and now. Nasser draws principally for his economic analysis from both Karl Marx and John Maynard Keynes. Nasser sees Keynes as an “institutional socialist,” (91) though, of course, as a committed socialist indebted to Marx, whose sympathies obviously lie with labor, he wants Keynes’ proposed National Investment Board comprised not of the “educated bourgeoisie” as Keynes preferred, (257) but of Keynes’s “boorish proletariat” instead! (252)

Parallel with Nasser’s account of capitalism, capitalists, and its economic and political spokespersons is his focus also on labor as well, especially its militancy and resistance to capitalist depredations, and how this was consistently attacked and repressed by capitalism and capitalists, both with private forces and through the aegis of the state, from the strike wave of the 1880s through the Powell Memorandum up to the present attack by police on militant protestors in places such as Ferguson, Missouri, and the militarization of the very police themselves, with their present-day “license to kill,” especially black men. Thus, Nasser’s book presents two intertwined stories, that of capital, and that of labor’s uneven resistance at various times to it. (But where Nasser sharply notes that, when labor was noticeably militant, and willing to strike, it often gained far more than it lost.)

Nasser sees the only solution to U.S. capitalist crises of simultaneous financialization, overproduction, secular stagnation and underconsumption as “democratic socialism” or “people’s democracy.” In this he’s certainly right. But Nasser gives these a somewhat ultraleft cast. He is a “soft” Russiagate denialist, and writes rather dismissively of Bernie Sanders that “in fact he was at best a European-style social democrat.” (216) But these are minor flaws in an otherwise truly masterful book, one that belongs in every serious leftist and socialist library, and one that certainly deserves to be widely and extensively read.

George Fish is an extensively-published socialist writer and poet in Indianapolis, Indiana, who is also a proudly-unionized blue-collar worker. Fish has previously published in Monthly Review, In These Times, Against the Current, Socialism and Democracy, New Politics, and elsewhere.
View all posts by George Fish →