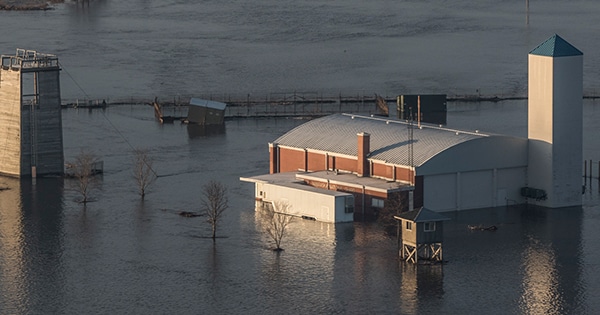 April 2019 marked the wettest 12-month period in the United States since record-keeping began 124 years ago, breaking the previous record set from May 2015–April 2016. In most places in the contiguous U.S., by April 2019 it had already rained more than the annual average during the 20th century. This week, heavy rain is dumping up to 1 foot of rain in northern and central parts of the U.S.. It’s evident that extreme precipitation events are getting more extreme, and also that climate change is one of the culprits.

But what does this mean to flood risks? We already know that more frequent, heavier rainfall is causing higher risk of flooding. As of May 21, 2019, hundreds of counties in states in the Great Plains and Midwest were under active flood or flash flood warnings and advisories (in light green, dark green, and dark red on the National Weather Service (NWS) map below). But it’s unclear what the “wettest 12-month period” ever on record means in terms of flood risks to the population, so we took a look at flood alerts, warnings, and advisories issued by the NWS to get some clarity.

A key function of the NWS is to communicate to government agencies and the public when life-threatening extreme weather events are likely or certain to occur. One key way in which the NWS does that is by issuing alerts based on meteorological forecasting models and data. 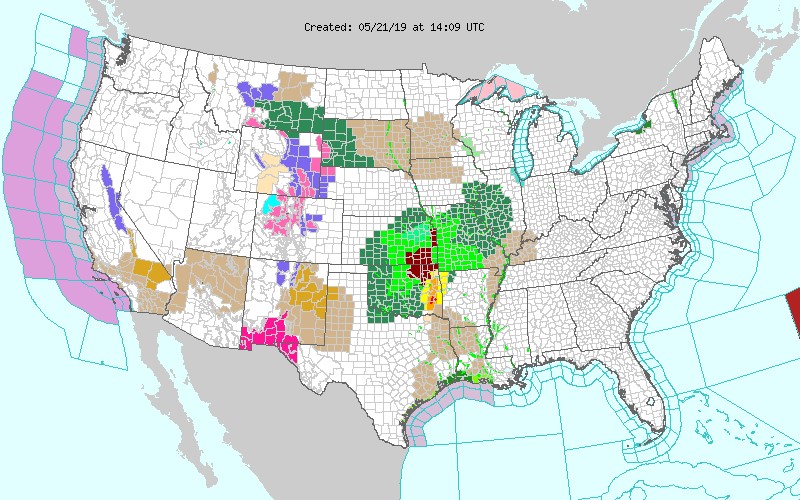 Active flood or flash flood warnings and advisories (in light green, dark green, and dark red) on May 21, 2019.

One useful way that climate scientists assess change over time is by looking at change in climatological variables (e.g., precipitation) between a recent period and a historical period—the difference is called a “climate anomaly.” I’ve taken that concept and applied it to calculating the difference between the average number of flood alerts issued between 1986-2017 (the historical period) and the number of alerts issued between May 2018 and April 2019—what the National Oceanic and Atmospheric Administration (NOAA) just declared to be the wettest 12-month period on record (the recent period).

My calculations for the contiguous U.S.—based on data from NWS alerts archived at the Iowa Environmental Mesonet—are alarming. I found that out of 3,108 counties in the contiguous U.S., 71 percent (2,197) had more flood watches, warnings, and advisories during the last 12 months than the average for the 1986-2017 historical period. Many of the counties with the largest estimates of increased alerts (in red on the map) host large populations in metropolitan areas, for example Los Angeles (CA), Indianapolis (IN), Chicago (IL), Phoenix (AZ), Dallas and southeastern Texas, Sioux Falls (SD), Nashville (TN), Columbus (SC), Asheville (NC), and Pittsburgh and Philadelphia (PA). Risks are high in these urban regions, many of which have large impermeable surface areas that can contribute to flood risks. And many have insufficient flood protection to deal with increased water volumes during the heaviest precipitation events. 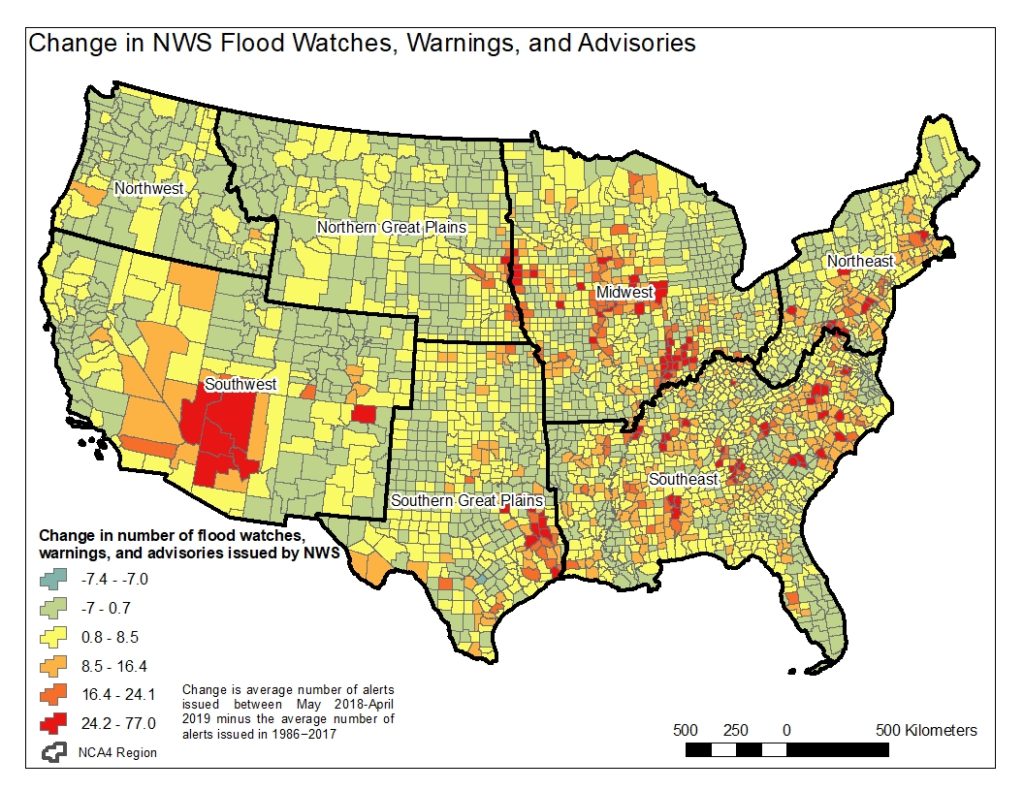 Slicing the data by region over time also shows that regional patterns are similar to the observed changes in heavy precipitation in the National Climate Assessment over the longer period from 1958–2016 (99th percentile precipitation panel in the linked figure), which found the largest increases in the Northeast and Midwest. These regions also experienced the largest rapid increases in flood watches, warnings, and advisories, with the Great Plains, Southeast, and Alaska also showing some rapid increases. 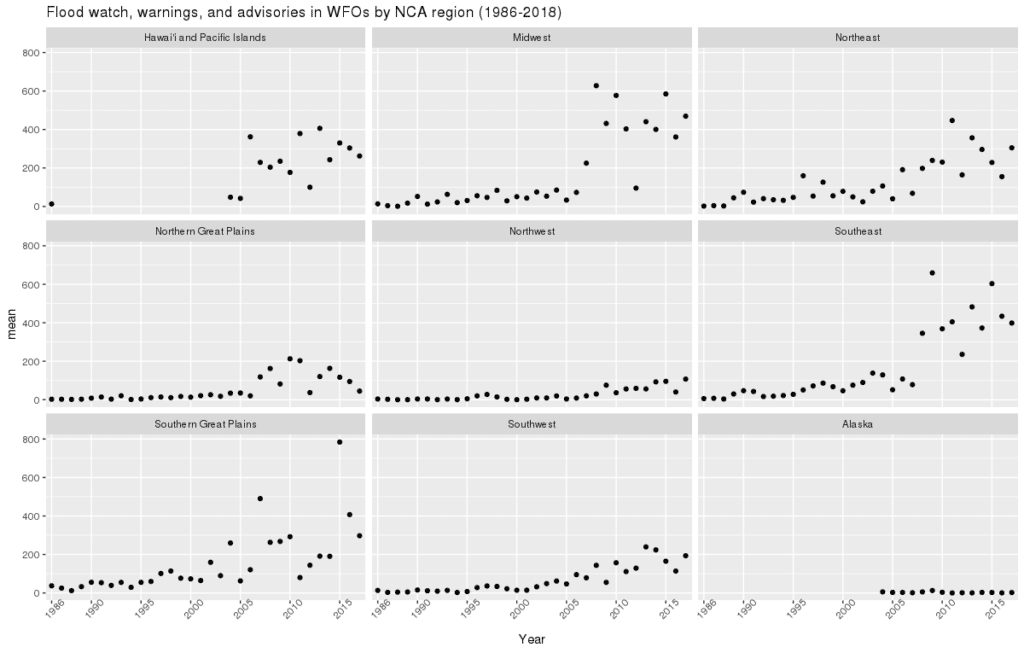 We are clearly in a new normal in terms of extreme precipitation and that raises questions about the new normal of flood risks. Certainly, the Arctic is getting hotter, and the U.S. Northeast has been chilly and gloomy, the March bomb cyclones contributed a ton of snow to Midwestern places that were quickly flooded as temperatures increased shortly after—and did you see that it snowed in New England in May?

But besides climate factors, the increase in flood alerts also points to increased risks to population due to new development (i.e., population increase) in areas of the country that did not have so many people. Recall that extreme weather alerts are issued by NWS to protect lives and property—so extreme weather that happens in non-populated areas does not typically trigger an alert. But as more places are populated, the people and infrastructure there become vulnerable to flood risks. That seems to be the case in places with large population growth over the last few decades.

Case in point: four of the counties with 50 or more alerts in the 12 wettest months on record are Arizona counties that experienced large population growth since the 1980s—and Maricopa County, where metro Phoenix is located, had the second-highest number of alerts (Yavapai County is number one). And along the Mississippi river banks, scientists say that farmland, residential, and commercial development on floodplains, and too much reliance on levees and other forms of flood protection, have given people a false sense of security. Yet that security is eroding, because the floodgates along the Mississippi have had to be opened more frequently. Floodwaters are intentionally diverted away from urban locations and onto agricultural or rural areas, often leading to economic damages in the agricultural sector.

Obviously, there is a complex set of factors contributing to localized increased flood risks—it’s not lost on me that even if Arizona counties had the largest increases, the Southwest as a region had the smallest growth in NWS alerts—expected for a semi-arid region. However, when it does rain, it is more likely to be more intense and overwhelm the infrastructure constructed for dry river beds that were constructed to handle flash flood flow rates of the past. We know that climate is a growing contributor to risks in many parts of the country. And these risks are happening more frequently in the same places—as the map above shows—which is exacerbating impacts on people and property.

Building resilience to increased flood risks from climate and other factors

With flood risks growing, it’s urgent to do more to help build resilience. Building resilience to flood risks requires integrated actions and resources by the federal family (e.g., FEMA, HUD, Corps of Engineers, USGS, NOAA, NASA, DOD, etc.), and NWS flood warnings are just one part of this. A few obvious places to start would be for the federal government to consider climate risks and make other improvements to mapping flood risks, investing in pre-flood risk reduction measures, thinking carefully about where and how we develop, preserving non-paved areas, and paying attention to low-income and other vulnerable communities who are typically overburdened with climate risks such as flooding.

In addition, the country relies on a network of government agencies, universities, non-government organizations, and the private sector for advancing and communicating the science on extreme precipitation and riverine flooding to communities, policymakers, planners, and engineers. Congress should continue to support adequate funding for the following key agencies and programs:

Funding should be increased for both the stream gauge and mapping programs. Flood risk maps exist for only about one-third of the nation and many of these are out of date and limited in scope. Congress and states with federal and state agencies could take three critical actions that would address the science and data needs by expanding research on extreme precipitation events, increasing the river gauge network, and ramping up flood mapping programs.

Finally, the analysis presented here fills one critical gap in tracking cumulative flood warnings—a task that should be routinely done by the NWS and communicated to the public by FEMA. All of these actions led by government agencies can help strengthen the science that keeps us safe from emerging flood and climate-related risks.