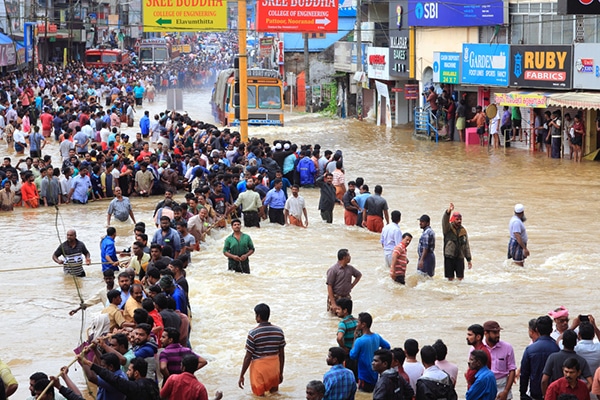 Climate strikes give me hope that the future may be saved.

In London, they have to be the largest protests I have ever seen in my life–and going by news reports, London didn’t even have the biggest demonstrations in number, which further renews one’s hope. Young and unapologetic participants carried placards inscribed with clever one-liners.

Climate change is indeed an emergency. The action taking place in the UK currently is a much-needed step in the right direction. Nonetheless, the time has come to realise the underlying role of imperialism in climate change and, thus, internationalise and democratise the climate action struggle.

While fighting climate change will save the Earth and the entire world will benefit from it, the fight is particularly crucial for semi-colonial countries that bear the biggest burden of climate change.

In my city Karachi, Pakistan alone, over a thousand people died in a heat wave in 2015.

Since that year, heat waves have been an annual occurrence and the meteorological department has issued a heat wave alert for between May 1 and May 3.

Despite the annual frequency of heat waves, it is only emergency measures that are implemented when such a crisis looms over the city. Water, ice and cool shady areas are arranged by the government. However, no long-term planning is undertaken due to factors ranging from poverty and limited resources to corruption and lack of seriousness.

This is a particularly alarming situation, because while poor countries are more likely to bear the brunt of climate change, they are also the least equipped to deal with it.

According to an International Monetary Fund report, rising temperatures also have adverse economic impacts in countries with relatively hot climates, which worsens the chances of such countries being able to deal with climate change. Yet it is these poor countries that will be and already are being hit first and worst by climate change.

The link between climate change and capitalism has always been strong

It was European states that industrialised first and thus became the pioneers of emitting greenhouse gases in their unimpeded race to maximise their profits and accumulate wealth.

In contemporary times, when global capitalism is the world order, developing countries are also producing their share of greenhouse gases.

Certainly, there are many factors involved in developing countries becoming contributors to global pollution, including the quest of the ruling classes to maximise their wealth and capitalists from imperialist power centres relocating their industry to developing countries in pursuit of cheaper labour.

Developing countries attempt to attract capital in order to be able to further develop. However, the end of the global assembly line remains in the imperialist power centres–commodities produced in the Third World are consumed in the First World.

This way, imperialist power centres retain their position in terms of consumption of commodities, their capitalists continue to profit off underpaid, cheap labour, and the pollution is also moved out of their region into the countries that they are so benevolently industrialising. All such factors make it necessary to internationalise the struggle against climate change.

Pitting the working classes of the rich and poor nation-states against each other works in favour of the ruling classes.

By the same logic, the possibility of a unity between international working classes is something that the bourgeoisie never wants. Whether a nation-state is rich or poor, its working classes, whose labour power generates surplus value, are always being exploited. In a world economy that is capitalist and imperialist in nature, the only way out for the oppressed majority is to forge a solidarity against the oppressor minority.

Our common struggle is the only way forward that can contain the imperialist advances of rich nation-states. Having said that, it is also important to look at the ways in which such a transnational, internationalist solidarity may be materialised. If we want to achieve that, our movements will have to be at least anti-racist, feminist, anti-capitalist, anti-imperialist, pro-migrant and pro-democracy. If climate action movements will not denounce slogans such as “Whose police? Our police” in an era when the police represents the state’s most brutal, racist, anti-poor and anti-migrant arm, the class and racial character of the movement will inevitably be reduced to purely middle-class and white.

If climate action organisers such as Extinction Rebellion are interested in broadening the class and racial character of their movement, one way to begin would be to build on the demand for Citizens Assemblies–add to it the demand for equal citizen rights for everyone involved in the movement. This is particularly crucial in the times we are living in, when a reactionary UK government wants to strip a brown Muslim woman of her British nationality. Concerted efforts to internationalise our movements are the need of the hour to combat the nexus between capitalism, racism, migratism, climate change and imperialism.

Students from 1,600 cities just walked out of school to protest climate change. It could be Greta Thunberg’s biggest strike yet
Traditional measures of unemployment are missing the mark