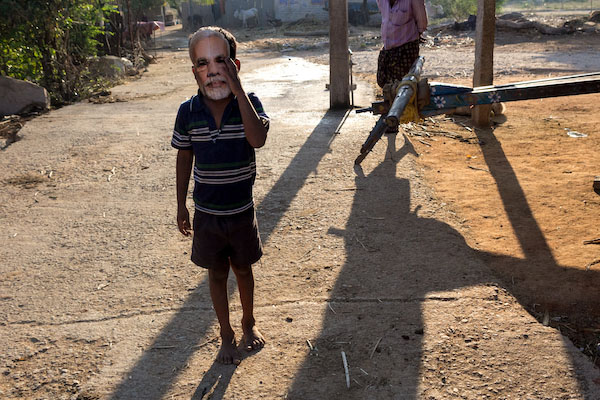 A boy in a Modi mask, in Amadagur mandal of Anantapur district. The villages of Amadagur mandal are some of the most affected villages during droughts which are very common in Anantapur. These villages have also very high rates of migration. Farmers from here often travel to cities like Cochin and Bangalore to keep up with their farming. Photo: Rahul M.

Ruchir Sharma’s recent article in The New York Times argues that Prime Minister Narendra Modi is in fact a socialist. Mr. Sharma tells us that as a twenty something, he hoped India would elect a “free-market reformer” like Ronald Reagan, and looks back at his younger, more idealistic self and reflects on how clueless he was. Perhaps it will cheer him up to know that in fact, he remains as clueless today as he was then.

We must pause to give credit where credit is due: Mr. Sharma sounds as if Modi is well on his way to becoming his idol, Ronald Reagan.

In his view, welfare programs are a “tool of state control” and independent India’s early governments were “meddlesome” because they wanted to “spread the wealth to its [India’s] impoverished masses.” He even quotes Uma Bharti saying the Modi administration is engaged in implementing a “Marxist” programme to reduce inequality.

All this sounds very familiar. In support of the American Medical Association’s Operation Coffee Cup Reagan famously ranted about how socialized medicine (Medicare) threatened the American peoples’ freedom. The Kennedy administration’s food-stamp programme, their amendment to the Fair Labour Standards Act (1961) that raised the minimum wage to $1.25 an hour — this was proof that Communists were “infiltrating all phases of the government.”

And this is to say nothing of the Reagan administration’s disastrous and reprehensible involvement in Latin America. In line with the Truman Doctrine, Mr. Sharma’s idol provided military and financial support to right-wing rebels and governments that were guilty of human rights violations, war crimes, and even genocides, all the while providing them with political cover in the form of aid and white propaganda. This happened repeatedly during the Reagan administration: in Nicaragua, where he backed the Contras against the democratically elected Sandinista government; in El Salvador, where he backed the brutish El Salvadoran military-led government against the Farabundo Martí National Liberation Front; in Guatemala, where he backed the dictator José Efraín Ríos Montt, who pursued a scorched earth campaign against the indigenous Maya population.

Will Mr. Sharma follow through, and offer ideological cover to a fascist?

Of course he will. It is clear that Mr. Sharma was awed by the ascendancy of Narendra Modi. He writes of the so-called Gujarat Model: “By courting multinational companies, building roads and streamlining the state bureaucracy, Mr. Modi oversaw a stunning boom.”

This boom—and the hype surrounding it, of course—has been extensively criticized. Indira Hirway writes in The Wire that “After the huge incentives to corporate units, the government is left with limited funds for education, health, environment and employment for the masses.” Christophe Jaffrelot argues that this model of development could easily be implicated in the job crisis that the state faced:

In the 2000s, the economic policy of the new chief minister, Narendra Modi, gave a new dimension to the state’s business-friendliness because it benefited SMEs [Small and Medium-sized Enterprises], the entrepreneurial basis of Gujarat, less than large corporate houses. This “model” had implications not only for the economy (as evident from the problems that the SMEs started to face—as well as the exchequer for fiscal reasons), but also for the society (big firms need fewer workers than SMEs), the polity (grand corruption was a corollary of this pattern), and the environment (big companies were allowed to breach rules and regulations in that domain too).

It would appear that Mr. Sharma is unaware of all this. Rather, his issue with the Gujarat Model is the manner in which Modi went about presiding over a booming economy: “by force of personality, cutting foreign investment deals himself and intimidating bureaucrats into building roads on time without demanding bribes.” Is this really criticism? Could he be more transparently obsequious?

Mr. Sharma sticks to his guns, though. “This was economic development by executive order, not economic reform by systematically expanding freedom,” he complains. This is slick subterfuge, and we’re going to explain why; but first, some vocabulary.

The word shibboleth has its origins in the Old Testament. From Judges 12:5–6 of the King James Bible:

And the Gileadites took the passages of Jordan before the Ephraimites: and it was so, that when those Ephraimites which were escaped said, Let me go over; that the men of Gilead said unto him, Art thou an Ephraimite? If he said, Nay;

Then said they unto him, Say now Shibboleth: and he said Sibboleth: for he could not frame to pronounce it right. Then they took him, and slew him at the passages of Jordan…

In short, a shibboleth is a codeword that signals to others that one is “part of the club,” and since Mr. Sharma offers no clarification as to what this freedom entails, we can fairly assume that he is using the word “freedom” the way Reagan (and, indeed, every post-WWII American president) did. In asking for “freedom,” Mr. Sharma adopts the language of progressives, using words like “progress” and “liberty,” thereby making his ideas more palatable, more legitimate, more reasonable — after all, who doesn’t like freedom? This is the modus operandi of the neoliberal project: it co-opts the language of progressive movements by appealing to “individual freedom,” while simultaneously dismantling any possibilities for collective action and social justice. This idea is summarized neatly by John Gray at the New Statesman:

Using the welfare state to realise an ideal of social justice is, for neoliberals, an abuse of power: social justice is a vague and contested idea, and when governments try to realise it they compromise the rule of law and undermine individual freedom.

Mr. Sharma’s “freedom” means freedom for the interests of monopolistic corporations and global capital. The freedom to poison and pollute without consequence; to exploit labour without oversight; to control the process of regulation. In contrast to the ‘doublespeak’ of neoclassical pundits, real words have specific meanings, meanings which turn Mr. Sharma’s “freedoms” on their head. Articles like Sharma’s immediately expose their authors as fraudulent precisely because their coded usage of words doesn’t align with what the words actually mean.

It doesn’t matter whether Uma Bharti thinks Modi is delivering on a Marxist agenda because it is patently the case that neither she nor Mr. Sharma understands what a Marxist agenda is. Referring to mainstream Indian political parties as Leftist despite their near-simultaneous capitulation to neoliberal reforms is incorrect, as Leftist and neoliberal ideologies are antithetical to each other, and the latter grew in response to the former. The BJP’s political calculus is less grounded in the Swadeshi movement and more grounded in the hyper-masculine Hindutva project, and to suggest that this is not the case is intellectually dishonest.

Progressives of all stripes ought to, in the years to come, pay careful attention to the way language is deployed in public discourse, to recognize shibboleths and call them out. Neoliberal reforms were smuggled in via this route, and as the results of the election indicate, fascism is next.

Malhar is an independent researcher and activist working in Mumbai, India.