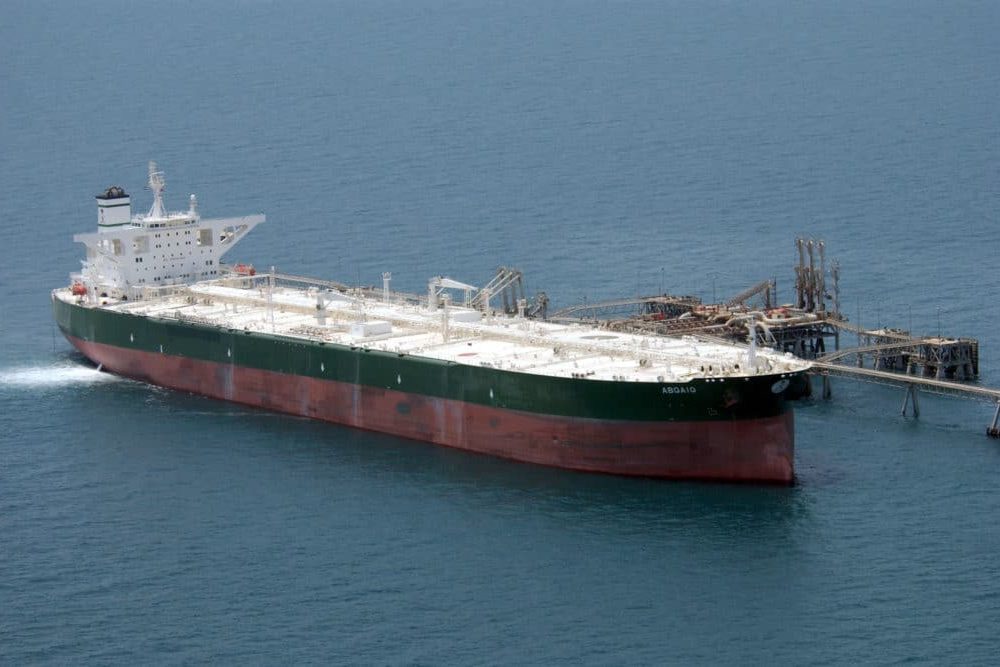 Commercial oil tanker AbQaiq readies itself to receive oil at Mina-Al-Bkar Oil terminal (MABOT), an off shore Iraqi oil installation. By U.S. Navy photo by Photographer’s Mate 2nd Class Andrew M. Meyers. This Image was released by the United States Navy with the ID 030629-N-4790M-003 (next).

It’s hard to predict what will happen in the oil market as the U.S. sanctions on Iran tighten. For now, it looks like India, Japan, South Korea and Turkey will hold off from buying Iranian oil. These countries—with China—had been the main sources of Iran’s foreign exchange. It is unlikely—at the present time—that India, Japan, South Korea and Turkey will break the U.S. siege on Iran. They have made it clear that they do not want to rattle the U.S. cage. Request for new waivers from the U.S. came to naught. India’s government had said that it would reassess the purchases of cheap Iranian oil after the elections. It is likely that India will restart some buys, but certainly not enough to prevent economic collapse in Iran.

As the May deadline for the U.S. sanctions loomed, these countries bought vast amounts of oil from Iran to create their own buffer stocks. Revenues from the export of oil reached $50 billion for the Iranian financial year of 2018-19 (ending March 20). The oil sector contributed to 70 percent of Iran’s exports. This income is essential for running Iran’s government and paying its 4.6 million employees. The cost of the government is roughly $24 billion. With the collapse of sales to India, Japan, South Korea and Turkey, Iran will have a very difficult time raising revenues to maintain its economy. The National Development Fund and the hard currency reserves have already begun to be depleted, with dollar holdings now in the tens of billions.

Tehran has long hoped that China would continue to buy Iranian oil and prevent the meltdown of Iran’s economy and its government. There are two reasons why China would want to ignore U.S. sanctions and continue to buy Iranian oil. The first has to do with the fact that Iran’s oil is cheap and of a quality that Chinese refiners prefer. The second has to do with Iran’s crucial location along the line of China’s Belt and Road as well as its String of Pearls initiatives. Chaos in Iran or a government in Tehran that is pliant to the United States would be unacceptable to Beijing. Roads, trains and pipelines—the infrastructure of the Belt and Road Initiative—are to run from the Chinese territory through Central Asia into Iran and then outward toward West Asia and—via Turkey—into Europe. Iran’s centrality to this project should not be underestimated.

In the first few months of 2019, China bought about half of Iran’s crude oil exports. It has become a crucial pillar for Iran, whose diplomats say quite openly that if China no longer buys Iran’s oil or invests in Iran, the problems for the country will be grave. Massive oil buys from China in the weeks leading to the end of the U.S. waivers are, however, no indication of the continuation of this relationship. Chinese oil companies put in large orders to stockpile oil in anticipation of the cuts. Oil analysts suggest that the two major Chinese oil importers—China Petrochemical Corporation (Sinopec) and China National Petroleum Corporation (CNPC) have not put in any buys since the U.S. waivers expired.

Why China Is Not Buying Iranian Oil

China—the world’s fastest-growing consumer of oil—continues to buy oil from the United States—the world’s fastest-growing producer of oil. These two countries are locked in a trade war, with tariffs rising on a raft of products from steel to soybeans. China has not placed any tariffs on U.S. crude oil imports, but it has reduced its purchases of U.S. oil by 80 percent. Despite China’s withdrawal from the U.S. oil market, it has not closed the door on future purchases. Meanwhile, China has increased its oil purchases from Saudi Arabia by 43 percent in April. There is every indication that China will continue to increase its buys from the kingdom during the course of this year—to substitute for Iranian oil and, perhaps, for U.S. oil. China has also been slowly increasing its natural gas imports from Australia, a tendency that is expected to rise.

New surveillance technology of tankers, low oil prices and more constraints on settling bills have made it difficult to smuggle oil out of Iran. Last year, smuggled oil out of Iran totaled a minuscule 0.3 million barrels per day. This is not enough to compensate for the oil purchases stopped by East and South Asian countries. U.S. sanctions, in this climate, have made tanker owners and insurers skittish about carrying Iranian oil.

Chinese firms are susceptible to this pressure. Nonetheless, the Liberian-flagged tanker Pacific Bravo is said to have loaded Iranian oil after the expiry of the waiver and is making its way to China. As of this writing, the tanker is off the coast of Sri Lanka. When it arrives in China and offloads its cargo, how will the U.S. respond?

Earlier in May, Iraq’s Oil Minister Thamer Gadhba said that his country would continue to buy Iran’s natural gas—essential for Iraq’s electricity grid. This was despite U.S. pressure to cut natural gas purchases from Iran and to substitute this through a $14 billion deal with U.S. energy firms (including General Electric). Indications show that Iraq will not bend to U.S. pressure at this time. Nor will Iraq block Iranian oil from going to Syria by truck—an energy source that is essential to Syria.

U.S. troops continue to arrive in the Gulf region, threatening Iran. Zarif and al-Hakim jointly said that this is a dangerous development. Pressure on Iran increases daily.

China has made it clear that it could buy Iranian oil if it can pay in yuan or euros, but it does not want to make Iran part of its dispute with the United States. The appetite to bring Iran onto the bargaining table with the United States does not exist in Beijing. Nor is Beijing willing to provide Iran with a protective shield.

But there are pressures on China not to ignore its own interests in the region. China built a large port in Gwadar, Pakistan, which was intended to circumvent the long transit of goods (and oil) from the Gulf through the Straits of Malacca to the South China Sea. But there are tensions here, as Baloch Liberation Army attacks mount on Chinese targets. One hundred and fifty kilometers west of Gwadar is the Iranian port of Chabahar, developed with Indian assistance. The United States—at a request from the Afghan government—has turned the other way to continued Indian involvement in that port, which includes transportation lines to the Afghan border through Iran. Iran has signaled that it would be interested in giving China a role in this port if India begins to drift away.

China has increased its engagement in West Asia, but not to the point of getting sucked into a conflict that it sees as unfortunate. What this means is that Iran cannot rely fully on China. And yet, China is the only antidote to the U.S. suffocation of Iran.

Global oil production is high, as are oil inventories. Oil prices, consequently, are low and will likely be lowered by reduced global demand. Projected low oil prices should raise more alarms in Tehran, since Iranian external revenues will decline and so too will its importance to Chinese importers. The only reason for China to throw a shield around Iran is to protect the Belt and Road Initiative. Not for the oil.