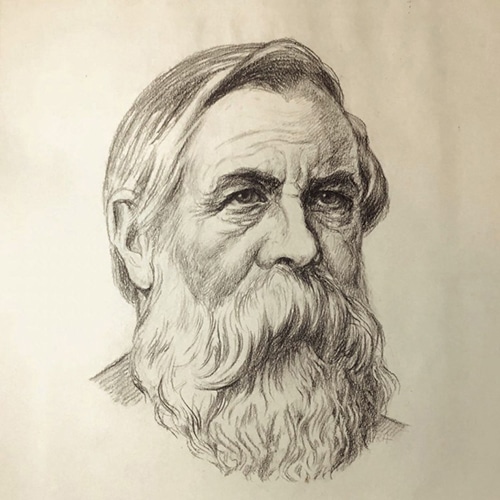 Conrad Schmidt was a German economist and intellectual, an early follower of Marxism who corresponded with Engels during the 1890s. He was also older brother of the famed artist Käthe Kollwitz. Neo-Kantian by persuasion, Schmidt nevertheless asked Engels what the philosophical underpinnings of Marx’s thought were. Engels already had put out a book on the topic, Ludwig Feuerbach and the End of German Classical Philosophy (1885), but apparently the implications of this work were not clear enough. So he wrote this letter in reply.

Unfortunately, Schmidt did not take Engels’ advice. Like Eduard Bernstein, he deplored the supposed “Hegelian pitfalls” of Marx’s dialectical method, and soon succumbed to revisionism. Georg Plekhanov penned a good polemic against Schmidt on this point. I might expand on this in another post, but the influence of Hegel was crucial for the categorial framework of Marxism (and hence its rejection of empiricist doctrines). Regardless, enjoy this post for now and hopefully there will be more updates to follow.

You cannot, of course, do without Hegel. He’s another chap whom it will take you time to digest. The short paper on logic in the Encyklopädie would be quite good to start off with, but the edition you should have is that in Volume 6 of the Werke—not [Karl] Rosenkranz’s separate edition (1845)—since the former contains far more explanatory notes from the lectures, even if that idiot Henning himself frequently fails to understand the latter.

In the introduction, in §26, etc., you have first the critique of Wolf’s version of Leibniz (metaphysics in the historical sense), then that of the English and French empiricists in §37, etc., then that of Kant, §40 et sequ. and, finally, that of Jacobi’s mysticism, §61.—In the first section (Being), you ought not to linger too long over being and nothing—the last paragraphs on quality followed by quantity and measure are much nicer, but the theory of essence constitutes the main section: the dissolution of abstract opposites into their insubstantiality when, as soon as one tries to grasp one aspect alone, it changes imperceptibly into the other, etc. At the same time you can always clarify things by means of concrete examples. E.g. you, as a fiancé, and your affianced yourselves present an outstanding example of the indivisibility of identity and difference. It is quite impossible to ascertain whether sexual love is the pleasure derived from identity in difference or that derived from difference in identity. Remove the difference (in this case of sex) or the identity (the humanity of both), and what remains? I remember how tormented I used to be at first by this indivisibility of identity and difference, though we cannot take one step without stumbling over it.

On no account, however, should you read Hegel as [Paul] Barth has read him, namely so as to discover the paralogisms and shabby expedients that served him as tools for constructing his system. That is a schoolroom exercise, nothing more. What is far more important is to discover the truth and the genius beneath the falsity of the form and the factitious context. For instance, the transitions from one category or opposite to another are almost always arbitrary—and are often achieved by means of a joke, as in §120, when positive and negative ‘fall to the ground’ so that Hegel may proceed to the category “ground.” To rack one’s brains over this is a waste of time.

Since, in Hegel, each category represents a stage in the history of philosophy (as, indeed, he usually indicates), you would be well-advised to read the Vorlesungen über Geschichte der Philosophie—one of his most brilliant works—by way of comparison. For recreation I would commend the Ästhetik. Once you have gained some familiarity with it you will be amazed.

The inversion of Hegel’s dialectics is based on the assumption that it is the “self-development of the idea” of which, therefore, the dialectic of facts is only the image, while the dialectic in our minds is but the reflection of the actual development taking place in the natural world and human history in obedience to dialectical forms.

You should try comparing the Marxian progression from commodity to capital with the Hegelian from being to essence; this would give you quite a good parallel—on the one hand, the concrete development which follows from the facts, on the other, the abstract construction, in which extremely brilliant ideas and, in certain cases, very just transformations such as that of quality into quantity and vice versa, are elaborated to produce what appears to be the self-development of one notion out of another, of which, indeed, it would be possible to concoct a dozen of the same kind.