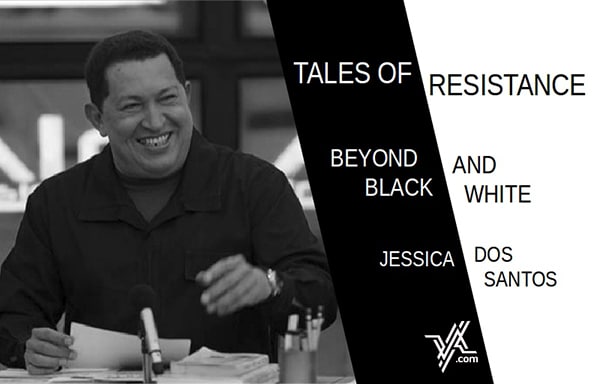 “Venezuela today is going through chapters that require more than “black” and “white” to be written” – Jessica Dos Santos examines the government’s communications policy, from Chávez to the present, in her latest column.

A couple of decades ago, when I became aware and developed a certain recollection ability, Social-Christian COPEI’s Rafael Caldera had taken office for the second time (1993-1998).

Then, every time there was a presidential address, I would run and plant myself in front of the TV set so I could watch Caldera fall asleep live on television. Although, deep down, I also held hope that, for some reason, school would be suspended.

“He looks like daddy in church,” I told my mother, who used to recriminate my giggling. “Don’t be mean, Jessica. He’s old,” she would lecture me.

Nevertheless, when Caldera did speak, his sentences were completely unintelligible… even for her.

At the time, Hugo Rafael Chávez Frías was bursting onto the media and political scene. A few years earlier he had staged a military rebellion [February 4, 1992] against then President Carlos Andrés Pérez, and a few months later he would win the presidency [in the December 1998 elections].

When it came to Chávez, my mom wouldn’t even let me watch him on TV. He carried a stigma that he seemed proud about: he was a military man.

The dictatorship that marked my parents’ youths in Portugal had also been a military one. Just like all the regimes that destroyed Latin American countries.

This particular (former) lieutenant colonel had to fight this prejudice, which took shape in an endless number of media attacks.

I remember that many of them were studied as supposed journalistic “feats” in the classrooms of more than one renowned Caracas university.

Nevertheless, Chávez was able to turn this on its head, and relying on his oratory skills, we saw him become the greatest communications teacher and educator through his broadcast “Aló Presidente,” a kind of formula to make himself known and to remain in direct contact with the people.

In the beginnings, I was still too young to withstand the TV marathon that the broadcast entailed (the longest one lasted a whole 8 hours and 7 minutes!).

But, once I started working as a journalist, I knew that my free Sundays had become a thing of the past: there was always “Aló” to cover, either in person or from the editorial boardroom.

Chávez was a hurricane of news amidst a sea of reflections. From then on, I got myself a notebook where I would write down an endless number of characters, books, authors, movies, places, which I should know regardless of how far away they were or how long ago they’d happened.

However, there was one broadcast that left me with a foolproof formula for trusting, or mistrusting, up-and-coming politicians and such:

If I were a councilman, mayor, whatever, and you see that I have a tiny Volkswagen, and live in a small apartment right here, but then all of a sudden I show up in an awesome SUV, that’s reason for you to ask: “Hey! What’s going on with Chávez? What’s he up to? Where did the pick-up truck come from?” And if later, out of nowhere, I move to a country house, stop dressing like everybody else and show up in awesome suits, I go from one to two or three SUVs, and furthermore I spend my life in restaurants and clubs, then it’s settled: Something needs to be done. As soon as there are signs, something needs to be done, no need to wait for me to have 20 SUVs and 4 airplanes. We need to tighten the moral screws. Our government needs to give an example of transparency and honesty across the board. [Aló Presidente 345, 06/12/2009]

Yes, I held on to these lines like a battle standard. In fact, joined them with something I had read in Che Guevara’s diaries a couple of days earlier:

Nowadays, unfortunately, the government could not make a case like this, in front of hundreds of people, without getting a reality check in return. Many have gone down the “20 trucks and 4 airplanes” road with no qualms whatsoever. One sometimes feels like a tremendous idiot for being so honest.

At the same time, after the last broadcast of “Aló Presidente” on January 29, 2012, and especially after Chávez’s death, the government’s communications policy fell off a cliff. Some days this is more visible than others.

For example, during the national blackout in March, after a great effort, my neighbors and I managed to put on the radio station where “Aló Presidente” first aired [Venezuelan National Radio, RNV] to figure out what was going on. To our dismay, the radio greeted us with the following words:

We must be patient. Puerto Rico went 11 months without power.

“What the fuck? What does that have to do with anything? In which school do they teach that this sentence would help us stay calm?” I thought. In the meantime, a neighbor looked at the ice box where we had stored her insulin and screamed:

That’s how, on a daily basis, we watch public media ignore an endless amount of issues which affect us under a sort of mantra “if you don’t mention it, it doesn’t exist.”

Likewise, gone are the days when authorities were publicly questioned by the organized people.

One way or another, there’s a belief here that highlighting problems, and pointing to causes other than sanctions, is tantamount to treason or surrender.

But are U.S. unilateral measures responsible for the poor distribution of available resources, corruption, lack of authority, etc.?

In the middle of this mess, we get to witness, all the time, a bunch of journalists (from state media) go from one euphemism to the next due to not really knowing what to say.

At the same time, some alternative journalists, from national and foreign media, those who should create a different form of communicating, have decided that the best way to “help us” is to deny the existence of an economic crisis by broadcasting from shopping malls, shops, restaurants, bars, parties, and supermarkets, which are out of reach for the vast majority of Venezuelans.

With so many tales of day-to-day resistance, of “people who struggle and create in a hostile world,” [quote by Ernesto Sábato], they prefer to showcase the sweet life of those who exchange dollars in the black market!

What’s the point of having full shelves at the expense of our empty pockets? What’s the novelty there? It’s no secret to anyone that during economic crises the poor grow poorer and the rich grow richer.

Venezuela today is going through chapters that require more than “black” and “white” to be written. If we keep limiting our color palette, out of fear of enemy manipulations, we will never move forward.

This year, as we celebrate the 20th anniversary of “Aló Presidente” [on May 23], and as we celebrate Journalists’ Day this month (in honor of the creation of “El Correo del Orinoco,” newspaper founded by independence hero Simón Bolívar in 1818), we must display the honesty of those communicational tools. Our task, clearly, is to devise the best way to tell our own story, lest we be expelled from the history tomes of tomorrow.

Jessica Dos Santos is a journalist at Radio del Sur and a writer for the web portal 15yUltimo and Épale CCS magazine. She is the author of the book “Caracas en Alpargatas” (2018) and a university professor. She’s won the Aníbal Nazoa Journalism Prize in 2014 and received honorable mentions in the Simón Bolívar National Journalism prize in 2016 and 2018.