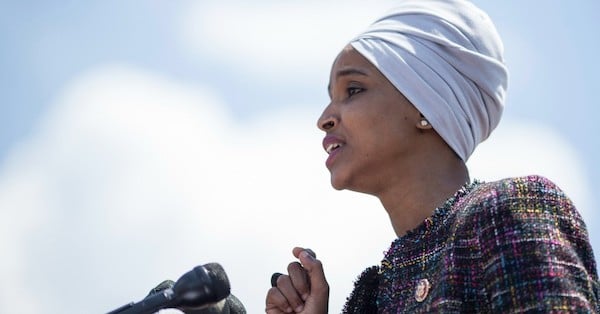 Citing her firsthand experience of the horrors of military conflict as a refugee from war-torn Somalia, Rep. Ilhan Omar Thursday night made an impassioned case against war with Iran amid reports that President Donald Trump approved—then abruptly called off—airstrikes on a number of Iranian targets.

“Mr. President, as a survivor of war, I want to tell you: going to war does not make you strong. It makes you weak,” Omar wrote in a series of tweets. “Sending teenagers to die, or return with lifelong wounds seen and unseen, does not make you a bigger person. It makes you smaller. Risking a regional or even global armed conflict does not strengthen our country. It weakens us.”

Omar was among a chorus of progressive voices denouncing the Trump administration’s march to war, but the Minnesota Democrat’s personal story as the first Somali refugee ever elected to Congress made her opposition to war with Iran uniquely compelling.

“I have seen firsthand the effects of war. Even in the best of cases, it never has the outcome you expect,” Omar wrote. “War is death, displacement, and terror. War is hell.”

“So I urge you: be strong,” Omar continued, addressing Trump. “Do not listen to the warmongers and war profiteers whispering in your ear. Do not send our men and women into harm’s way.”

As a survivor of war, I want to tell you: going to war does not make you strong. It makes you weak.

Omar also urged the American people to take action by speaking out against war and contacting their elected representatives.

“Let all our leaders know that a war with Iran would be a catastrophe,” she said.

And I urge the American people to make your voice heard. Organize. Call your member of Congress.

Let all our leaders know that a war with Iran would be a catastrophe. #NoWarOnIran

Omar was joined in warning against war with Iran on Thursday by a number of her Democratic colleagues, including Rep. Alexandria Ocasio-Cortez.

Asked by CNN reporter Manu Raju whether she has any concerns about the Trump administration’s approach to Iran, Ocasio-Cortez said, “Yeah, I think they’re trying to goad us into a military conflict that’s completely irresponsible.”

.@AOC minced no words in her comments on Iran and the Trump administration pic.twitter.com/WH6UBeFyF1

On Twitter, Ocasio-Cortez said the Trump administration “needs to put down its saber and pick up a phone.”

“Diplomacy is what grants us peace and stability—not war,” wrote the New York congresswoman.