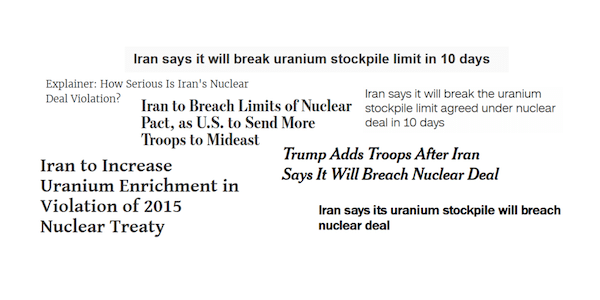 USA Today (6/17/19) describes Iran as planning to “break” an agreement that the U.S. has already renounced.

Quick question: Does the U.S. ever break, breach or violate its international agreements?

Apparently not, according to U.S. coverage of Iran’s recent announcement that it intended to go beyond the limits of the 2015 Iran nuclear deal in enriching uranium for its civilian nuclear program (frequently mischaracterized as a nuclear weapons program in media coverage). Reading corporate media’s inversion of reality, it’s hard to escape the impression that while Iran betrays its international agreements, the U.S. just leaves them behind.

An Associated Press report carried by USA Today (6/17/19) was headlined: “Iran Says It Will Break Uranium Stockpile Limit in 10 Days,” and reported that Iran’s announcement indicated its “determination to break from the landmark 2015 accord,” while noting that “tensions have spiked between Iran and the United States,” partly because the U.S. “unilaterally withdrew” from the landmark agreement. Note that the U.S. rejection of its obligations under the deal is referred to in neutral terms—Washington “withdrew”—while Iran’s response to U.S. nonobservance gets negatively characterized as a “break”—a pattern that persists throughout the coverage.

There was no indication in the AP piece that Iran offered conditions under which it would continue to comply with the Iran Deal (formally known as the Joint Comprehensive Plan of Action), which gives the false impression that Iran’s decision to end compliance with the JCPOA is settled and unconditional. 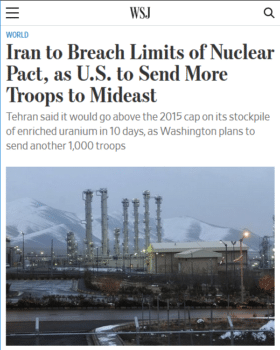 The Wall Street Journal (6/17/19) reports Iran will “breach” a pact that the U.S. scuttled more than a year ago.

The Wall Street Journal (6/17/19) offered the same kind of misleading headline: “Iran to Breach Limits of Nuclear Pact, as U.S. to Send More Troops to the Middle East.” Again, Iran’s potential departure from the pact whose terms the U.S. has vitiated is portrayed as a “breach,” while the U.S.’s actual violation of the deal is labeled a “pullout” in the accompanying piece.

The Journal, unlike the AP, did note that Iran offered conditions under which it would continue to comply with the JCPOA’s terms:

The spokesman for Iran’s atomic energy agency, Behrouz Kamalvandi, said that by June 27—10 days from Monday—the country would surpass its enriched-uranium limits. He said Iran would further increase its production in early July, but could reverse both steps if Europe provided relief from [US] sanctions.

CNN (6/17/19) went with “Iran says it will break the uranium stockpile limit agreed under nuclear deal in 10 days,” as their headline. Only people who read past the headline, which most people don’t, would’ve known that that’s not really what Iran is saying:

Iran has reiterated that it could reverse the new measures should the remaining European signatories in the nuclear deal (France, Germany and the United Kingdom) step in and make more of an effort to circumvent U.S. sanctions.

To its credit, CNN added “withdraw” in addition to the usual “violate,” “break” and “breach” in its list of words to describe Iran’s potential departure compared with just “withdrew” to describe the U.S.’s actions.

The New York Post (6/17/19) chose “Iran Will Violate Nuclear Deal, Boost Uranium Stockpile” as the headline to mislead readers, and kept with the pattern of describing the U.S.’s JCPOA breach as “pulling out of the deal.” However, unlike other reports, it didn’t feature any sources skeptical of Iran’s responsibility for the recent Gulf of Oman attacks on Japanese and Norwegian commercial oil tankers, despite crew members aboard the Japanese Kokuka Courageous contradicting U.S. allegations of an Iranian mine attack by claiming to have been hit by a “flying object,” and European officials calling for further investigation and urging “maximum restraint.” 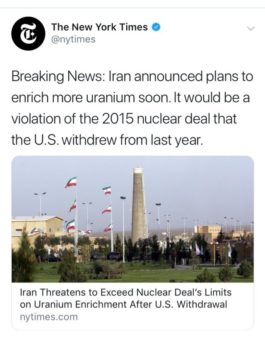 The New York Times’ headline (6/17/19): “Trump Adds Troops After Iran Says It Will Breach Nuclear Deal,” not only continued the above trends by not giving any hint that Iran might not depart from the pact, and characterizing the U.S.’s JCPOA violations as a mere “withdrawal,” it also reported on U.S. sanctions on Iran without mentioning that the sanctions themselves are violations of international law (Guardian, 10/3/18).

The Times uncritically cited Secretary of State Mike Pompeo’s statements that the U.S. is “considering a full range of options”—including military strikes—without mentioning that these would be violations of international law because they go against UN Security Council Resolution 1887, which requires peaceful resolutions to disputes regarding nuclear issues, in accordance with the UN Charter and the Non-Proliferation Treaty, which both the U.S. and Iran are parties to.

In fact, virtually all coverage fails to address the JCPOA in light of the NPT, because none of it challenges the legitimacy of the U.S.’s prerogative to impose limits on Iran’s civilian nuclear program to begin with. Article IV of the NPT supports the “inalienable right of all the Parties to the Treaty to develop research, production and use of nuclear energy for peaceful purposes,” in accordance with Articles I and II forbidding the transfer and receiving of nuclear weapons from nuclear-weapon states.

FAIR (10/17/17) has observed that corporate media frequently attribute malicious intentions to Official U.S. Enemies without going through the bother of presenting evidence. Iran is often accused of sneakily plotting to develop nuclear weapons, the way U.S. ally Israel actually did when it built the only nuclear weapons arsenal in the Middle East (Guardian, 1/15/14).

This is ironic, because Iran has actually been a consistent leader in the nuclear disarmament movement. Foreign Minister Javad Zarif, when Iran was the chair of the Non-Aligned Movement, critiqued the JCPOA because it didn’t go far enough to ensure peace in the Middle East by not establishing a Nuclear Weapons–Free Zone there. Iran was also one of the first countries to propose making the Middle East a NWFZ, bringing up the proposal to the UN General Assembly in 1974 (CounterPunch, 12/13/13).

Journalist Gareth Porter (Foreign Policy, 10/16/14), reporting on Iran’s little-understood theocratic system, noted that Supreme Leader Ayatollah Ali Khameini’s fatwa against building any kind of WMDs in the 1990s is a formal ruling on Islamic jurisprudence, holding a legal status above mere legislation. He also pointed to Ayatollah Ruhollah Khomeini’s refusal to develop WMDs when up to 20,000 Iranians were killed by chemical weapons by then–U.S. ally Saddam Hussein in the 1980s (Reuters, 9/16/13)—with an additional 100,000 survivors developing chronic diseases. Current U.S. sanctions aiming to bring Iran’s “oil exports to zero” are exacerbating those chronic diseases, in addition to further strangling Iran’s economy, by restricting access to necessary medicine (Guardian, 9/2/13).

Of course, none of this can be mentioned, because it contradicts the corporate media narrative of Iran being an enemy that must be confronted, with U.S. aggression against Iran being portrayed as defensive countermeasures (FAIR.org, 5/19/19, 6/6/19). For U.S. media, Iran is the only JCPOA party with commitments that can be “breached,” “violated” or “broken,” with the U.S. free to leave them whenever it wants to, without harming its reputation as a trustworthy party to international agreements.