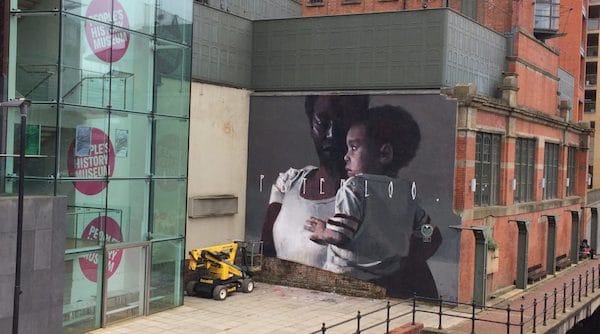 Today, the People’s History Museum (subtitled the National Museum of Democracy) sits in the restored and extended Pump House on the left bank of the river Irwell, marking the border between Manchester and Salford. The building is an impressive post-modern structure: a grade II listed former hydraulic pumping station fitted with the new imposing architecture of a glass and corten (weathering) steel extension. It has all the trademarks of a contemporary museum–open foyer, gift shop and café–but its origins lie in a much more humble, political past.

The museum we enter today is eight years old, built after backers raised £12.5 million to extend, re‑brand, and re-launch the previous site. After three years of closure, PHM opened in 2010. It started, however, as most museums do, as a collection–in this case, a collection of labour history founded, as far as we know, by radical activists in the 1960s. The collection was originally housed in London, in the National Museum of Labour History that the originators opened in 1975. They wanted a way to preserve the history of working people, who were–and still are–largely overlooked in the writing of the dominant narratives of history.

The collection found a new home in Manchester during the 1980s when the National Museum of Labour History fell under threat of closure due to lack of funding. The collection was later ‘saved’ by Manchester City Council and other Manchester authorities, assisted by the Trades Union Congress (TUC). The museum re-opened in 1990, located in the Princess Street building where the TUC was founded. After the collection outgrew its home, its custodians and curators moved the overflow to the Pump House, which eventually became its permanent home. In 2001, the museum was renamed to its current, catchier title.

Home of the people

Manchester is a fitting home for a collection of material culture that now extends beyond labour history to include political histories more widely. The city was the heart of the industrial revolution, in which Friedrich Engels realised that ‘working class’ had become a permanent rather than a transitional stage for workers. Based on this observation, Engels envisaged Manchester as a future site for communist revolution.

The People’s History Museum was not the first of its kind in Manchester. It joined smaller institutions, also concerned with working-class, political and radical histories. The Working Class Movement Library in Salford was founded in the 1950s. The Pankhurst Centre, housed in the former home of Emmeline Pankhurst and the founding site of the Women’s Social and Political Union, formally launched as an exhibition, library, and learning space in 1987, building on longstanding traditions at the site.

This radicality permeates the city’s more recent history. Its music scene in the 1980s and 1990s centred around a yacht showroom-turned-nightclub that was born out of working-class culture. The 1980s also saw 20,000 people take to the city’s streets in protest against the anti-gay Section 28 legislation. Fittingly, LGBTQ+ community activism is represented in PHM collections and exhibitions.

In recent years, the museum has gained attention due to major anniversaries of locally and nationally relevant events–for example, in 2018, the centenary of (certain) women gaining the right to vote, marked by the exhibition ‘Represent! Voices 100 Years On’. This year is the bicentenary of the Peterloo massacre, a democratic march that resulted in terrible violence against the marchers. The exhibition ‘Disrupt? Peterloo and Protest’ opened in March, accompanied by a series of ‘Radical Lates’ evening debates and a ‘Protest Lab’, open to the public ‘to use as an experimental space for creative campaigning and collective action’. These temporary exhibitions sit alongside the annual political banner rehang and permanent collections.

The galleries can be overwhelming. The collection is hung in a busy fashion with a lot of information and materials on display, which is reflective of the nature and breadth of the collection. As with most material culture collections, prioritising what is of value and what to display can be difficult. The extensive political banner collection is, by its nature, filled with large visual objects that compete for visitors’ attention. This is precisely the function of a banner outside the museum: to attract attention and make visible the presence of political unions in large crowds.

The type of hang that the museum employs in its permanent collections–which includes accessible signage and the recreation of political sites–is perhaps more welcoming than most museums, however. Although some items are encased, PHM avoids the stark and austere format of other national museums. Particularly welcoming is the conservation studio, which includes a viewing gallery so that visitors are able to view the process through which items, including banners, are restored.

We need a People’s History Museum because we have been, for some time, in a transitional phase of work. What constitutes ‘working class’ today, for example, is distinct from that which labourers recorded in the early documents that constitute PHM’s original collections. As the industrial working class declines, replaced by precarious and immaterial or service workers, though the premise of capitalism remains the same the nature of work changes. The challenges and issues arising from these new working practices–temporality and insecurity, for example–are documented in new cycles of struggle and resistance.

PHM actively conserves, documents and preserves the present as well as the past. It provides opportunities to look back at the changing nature of work and the political struggles that emerged alongside these changes. Within the archives are images and documents of work, unions and political parties–invaluable resources for when we choose to, in the words of Walter Benjamin, ‘brush history against the grain’.

PHM also acts as a space for learning and offers a site for new debates to emerge, regularly allocating space for community exhibitions and contemporary political discussion. It also exhibits documents from recent events and contemporary unions, as it continues to build its collections.

This ethos is exemplified in the Peterloo mural recently commissioned by PHM and displayed on the outer riverside wall. Painted by Axel Void, it depicts a resident of contemporary Manchester, Lydia, holding her two-year-old son Ezra, daughter and grandson of a Windrush victim. The image evokes the first victim of Peterloo, two-year-old William Fildes, who participated in the march with his mother, drawing parallels between past and continuing injustices and fights for equality. The PHM is a space for understanding the ongoing history of working people and social justice movements, looking forward as well as back.

Danielle Child is a lecturer in art history at Manchester Metropolitan university, and a former Red Pepper culture editor