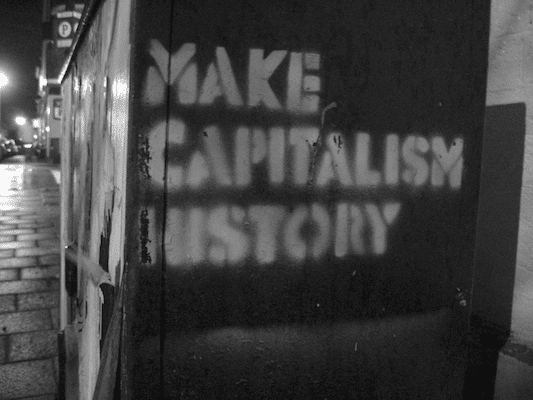 To perish or to radically transform the way we relate to one another and to nature, that is the question humanity has never had to face until now.

The evidence backing the above assertion is strong and accumulating. Nevertheless, there remains a stubborn problem of awareness as many who understand the perils facing humanity fail to connect them to its source: the capitalist organization of planetary life. Failure to address this problem will only guarantee that the predictable future characterized by immense suffering associated with a generalized social collapse and ecological ruination on a planetary scale will come to pass.

In this brief essay, I will tackle this problem of awareness by addressing a series of thematically-related questions that are often raised by those who question whether the source of the problems we currently face can reasonably be said to be the capitalist system.

Why pick on capitalism when people from time immemorial have wrestled with various kinds of environmental degradation? Haven’t humans experienced such matters as soil erosion and depletion, overhunting, and widespread logging prior to the advent of the capitalist social order? Isn’t the problem more accurately located in the kind of human interactions with nature that organized human life requires? After all, didn’t the Maya, a sophisticated civilization made up of 19 million people, experience a rapid collapse in a span of a mere century due to a drought that had been severely exacerbated by rapid deforestation? Why then place the blame on capitalism and not on organized human life itself, especially given that revolutionary advances in technology have made possible a dramatic increase in human populations and vastly increased the impact of human actions on the environment?

It is true that peoples in the antiquity faced environmental degradation. For example, deforestation was responsible for 60% of the drought that led to the rapid collapse of the Maya during the 8th or 9th centuries.(1) But it is important to realize that the problems then were limited to a locality or a region. Today, by contrast, the ecological reach of the problems we face are global and threaten nearly the entirety of life on the planet. This is the first unique feature of the contemporary era.

Science, in fact, tells us that we are now living in a do-or-die moment in history.

Take the global warming as the Earth is now recording the highest levels of atmospheric carbon in over three million years. The planet has heated up by a degree since the dawn of the industrial age. “Limiting global warming to 1.5°C [compared to a catastrophic 2°C above the preindustrial level] would require rapid, far-reaching and unprecedented changes in all aspects of society,” says the Intergovernmental Panel on Climate Change (IPCC), the UN body for assessing the science related to climate change.(2)

Take the heating of the oceans. Since 1871 the oceans have been heating on average by an equivalent of about 1.5 Hiroshima-size atomic bombs per second. The heating has accelerated as carbon emissions have risen. Today that equivalent is between 3 and 6 atomic bombs per second. The oceans absorb more than 90% of the heat trapped by anthropogenic greenhouse gas emissions. This added energy raises the sea levels and enables more intense hurricanes and typhoons.(3)

Or take the accelerated rate of extinction of species on Earth. A New UN report projects the extinction of one million animal and plant species within decades, representing one-eighth of total number of species. The report is the most comprehensive ever completed involving 145 experts from 50 countries, with input from another 310 contributors, over a 3 year-long systematic review of 15,000 scientific sources. “The overwhelming evidence,” it concludes, “presents an ominous picture.” “We are eroding the very foundations of our economies, livelihoods, food security, health and quality of life worldwide.” It urges immediate transformative change, by which it means “a fundamental, system-wide reorganization across technological, economic and social factors, including paradigms, goals and values.”(4)

The second, and related, feature of the contemporary era is that we are no longer witnessing societies whose activities threaten their existence but a globalized economic order whose normal operations threaten life on a planetary scale. That is, we are dealing with a capitalist economic system with a global reach. It is precisely because the system’s reach is global that the damage it inflicts on life-support systems is so widespread as to set it on a tragic collision course with the Earth itself.

It is crucial to realize that this widespread damage originates from the normal functioning of the system and not from its malfunction.(5) The systemic nature of the ecological degradation should compel us to analyze with sober senses the central driving forces of the system as a whole. These are (a) a cancer-like hunger for endless growth driven by the “egotistical calculation” of commerce seeking maximum profitability, (b) the treatment of human labor as a cost leading capital to oppose labor capturing a fair share of the wealth it creates, and (c) the determination of massive investments by private interests, and increasingly by a transnational capitalist class, a tiny sliver of the total global population.(6)

Let’s take the last point. Peter Phillips shows in his recent book Giants: The Global Power Elite that just 199 people manage 17 transnational investment companies that together controlled $41 trillion worth of assets in 2017. They, the governments that accommodate them, and other networks of power they have set up, are primarily motivated by securing capital investments free from any resistance, with maximum return on investment, and with nation-states as “population containment zones” for global capital.(7)

So far, I have concentrated on the global nature of capitalism and its impact on the planet’s ecosystem. Capitalism, however, has intensified its assault not just against this beautiful planet but against the people inhabiting it. Everywhere, the lords of capital use the differences of class, race, gender, sexuality, and nationality to divide the people and keep the regime of brutal exploitation, accumulation, and domination safe from any serious challenge. It is in the nature of capital to sacrifice the people and the planet at the altar of accumulation for accumulation sake.

How else are we to make sense of the facts that the world’s 2,200 billionaires increased their wealth by $2.5 billion per day in 2018 while nearly half of humanity (3.4 billion people) live with less than $5.50 a day; that the super-rich had stored $7.6 trillion of their wealth in offshore tax havens in 2015 while some 10,000 will die daily of lack of access to health care; and that Ethiopia’s health budget, a country of 105 million people, is nearly equivalent to just a 1% tax on Jeff Bezos’ fortune ($112 billion), the richest man in the world?(8)

The ruling class has no good ideas about how to address the existential crises the reproduction of its own class domination generates. Nor could we assume that it even has a serious understanding of the system or ways to ameliorate its socio-ecological consequences. In fact, the ever-increasing concentration of wealth in its hands ensures that no solution, even if it is compelled to accept it by pressures from below, can remain effective for long and not be subject to rollback.

It is left to us, therefore, to free our minds and acquire the ‘we’ consciousness necessary to mount a serious challenge to global capitalism and its by-products: imperialism, neo-liberalism, war and militarism, racism, sexism, poverty and, especially, the destruction of the ecosystem.

There are some encouraging signs that the young have begun responding to the latter crisis. On May 24, 2019, hundreds of thousands participated in a student strike movement in over 1664 cities across 125 countries urging action to address the ecological crisis. Earlier on March 15, 2019, over 1.6 million people across 133 countries in over 2000 places turned out at such demonstrations. Other environmental movements had appeared earlier. In late April of this year, Extinction Rebellion, a British group, occupied major locations in London for ten days that led to the British government declaring a state of “climate emergency,” which received approval from parliament on May 1. In the US, the Sunrise Movement, comprised of young activists, has been pushing politicians to adopt a Green New Deal.(9)

Time, however, is not on our side. We must act more forcefully and in more radical directions before the full range of catastrophes awaiting us materialize. We must not be satisfied with only pushing politicians to align themselves with the goals of the Paris Agreement. The latter is merely a step towards the long ecological revolution needed to create a just, free, and sustainable society. A Green New Deal should, for instance, take on the role of militarism and war in destroying the planet’s ecology.

But we can only do so if we try to see through the ideological mystifications the system generates to camouflage its nature and if we engage in serious anti-capitalist politics from below. Only then can we generate a radical hope to transform fundamentally the way we relate to one another and to nature. Such a radical hope rests on the premise that we are capable of collective rationality and can act proactively to avert predictable disasters. To rely only on reactive forms of consciousness and action will not do. We cannot spring to (limited) action in reaction to the already-occurring socio-ecological disasters and expect to overcome the sources of the multiple crises we are facing.

As Dr. King once said, “We are confronted with the fierce urgency of now.” There is, he said, “such a thing as being too late,”(10) especially now and in relation to the rapid unfolding of the ecocidal tendencies of the system. But as the worst is yet to come, we must insist with Marx that humanity be “at last compelled to face with sober senses his real conditions of life, and his relations with his kind,”(11) and I would add, with nature, and act to transform the world accordingly.