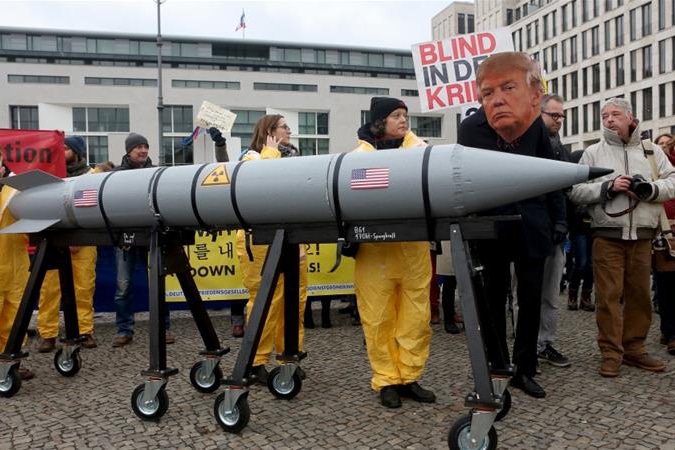 Activist with a mask of Donald Trump in a demonstration against nuclear weapons, November 18, 2017, Berlin. Photo credit: Adam Berry/Getty Images.

At a Non-Aligned Movement meeting in Caracas, Venezuela, Iran’s Foreign Minister Javad Zarif accused the United States of America of “economic terrorism.” Unilateral U.S. sanctions have clobbered Iran, which—like most countries on earth—is reliant on the financial system that remains dominated by the United States.

The United States has had a sanctions regime in place against Iran for decades, almost since the Iranian Revolution of 1979. The U.S., France, and Germany later reneged on their nuclear energy contracts with Iran and kept billions of dollars of Iranian money.Matters sharpened in 1996, when the U.S. administration of Bill Clinton signed the Iran-Libya Sanctions Act. Since then, the U.S. pressure on Iran has increased, then decreased, and increased again—but it has not been withdrawn.

The United States, since 1979 but more firmly since 1996, has accused Iran of trying to produce a nuclear weapon. Iran has denied this.

Iran claims that it is merely acting within what is permitted by the Nuclear Non-Proliferation Treaty (NPT), which Iran signed in 1968. The NPT allows its members to develop a nuclear energy program, which includes the enrichment of uranium into fuel for nuclear reactors. Iran began its nuclear power program in 1957. The United States of America—alongside France and Germany—provided nuclear plants, and fuel for the development of nuclear energy in Iran.

Article IV of the NPT clearly states that all signatories have the right to “participate in… the fullest possible exchange of equipment, materials and scientific and technological information for the peaceful uses of nuclear energy.” This includes the enrichment of uranium, at a threshold much below nuclear weapons-grade.

It was from this period—when Iran restarted its nuclear energy program—that the United States has made the claim that Iran is not obliged to enrich uranium.

The United States says that Iran’s requirement to enrich uranium—at any level—is the pathway to nuclear weaponization.

Iran says that the NPT allows it to enrich uranium.

Here is the real gap between the two countries. This alternative perception of what Iran is legally allowed to do is at the root of the problem.

When Iran signed the 2015 Joint Comprehensive Plan of Action (JCPOA), it agreed to freeze uranium enrichment at a low level. This was a major concession, which permitted the deal to be signed.

When U.S. President Donald Trump withdrew the U.S. from the JCPOA, Iran argued that it was no longer obliged to freeze its uranium enrichment at 3.67 percent. Behrouz Kamalvandi, the spokesperson for Iran’s Atomic Energy Organization, announced that Iran has exceeded this cap, reaching 4.5 percent.

In response, the United States government rushed to push for new—harsh—sanctions on Iran’s nuclear supply network, which includes sanctions on companies in Belgium, China, and Iran. U.S. Secretary of State Mike Pompeo accused Iran of being “weapons of mass destruction proliferators.”

Certainly, Iran has exceeded the cap placed by the JCPOA. But it has only reached 4.5 percent—which is far below the 90 percent enrichment level needed to produce a nuclear weapon.

In 2010, Iran had offered to freeze its enrichment level at 5 percent, just above where it has now reached. That offer was rejected. In 2011, the Russians proposed a “step-by-step” plan, which once more proposed the 5 percent enrichment level as well as a comprehensive plan for transparency (including the full array of International Atomic Energy Agency surveillance) and a limitation on centrifuge research and production. This was also rejected by the United States and its European partners.

Iran’s head of the Supreme National Security Council, Ali Shamkhani, argues that the U.S. and Iran have different views on the NPT. That treaty allows countries to enrich uranium as long as it is at a level merely for nuclear energy and not for nuclear weapons. Iran insisted that the JCPOA affirmed Iran’s right to enrich uranium. That was “Tehran’s condition for entering the negotiations,” said Shamkhani.

The JCPOA has the imprimatur of international law with UN Security Council resolution 2231 (2015). That resolution says that the initial restrictions on Iran “will be followed by a gradual evolution, at a reasonable pace, of Iran’s peaceful nuclear programme, including its enrichment activities, to a commercial programme for exclusively peaceful purposes, consistent with international non-proliferation norms.” The full array of restrictions were to end in 2023.

Iran is a signatory of all the major treaties against weapons of mass destruction: NPT (1968), Biological Weapons Convention (1996), and Chemical Weapons Convention (1997). Based on these conventions and treaties, Iran claims the right to a peaceful nuclear program. The United States denies Iran the right to develop a peaceful nuclear energy program. That is the basic problem.

The U.S. has weaponized the NPT and the International Atomic Energy Agency to fulfill its political goals. India is not a signatory of the NPT. It not only has a nuclear energy program, but it has a declared nuclear weapons program (having tested nuclear weapons in 1974 and 1998). The United States has circumvented the NPT to arrange for the delivery of enriched uranium to India. Israel has a nuclear weapons program. The United States fully backs Israel and has never called for IAEA inspections inside Israel. This shows that the U.S. objection to Iran is not based on international law, but merely based on its political objectives.

At the Caracas meeting, the mood in the Non-Aligned Movement is against the U.S. view. The NAM has regularly affirmed Iran’s right to a peaceful nuclear energy program. Iran’s Foreign Minister Javad Zarif pointed to the “new wave of extreme one-sided adventurism” of the United States, which, he said, is “threatening peace and stability all around the world.” Iran’s “peaceful nuclear program,” Zarif said, is being disallowed by the United States, which has ended the Iranian nuclear agreement and violated the UN Security Council resolution.

There is no exit here. The United States, however isolated, refuses to accept that Iran has the right—under international law—to a nuclear energy program (which includes enrichment). As long as the U.S. holds this view, and as long as the other countries sit back and allow the U.S. to throw its weight around, there will be no solution to the standoff around Iran.